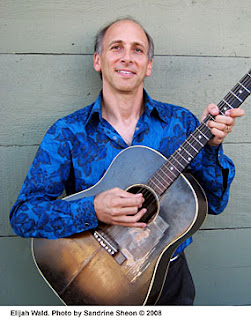 Elijah Wald is the author of the new book Dylan Goes Electric!: Newport, Seeger, Dylan, and the Night that Split the Sixties, which looks at the impact of Bob Dylan's performance at the Newport Folk Festival in July 1965. Wald's other books include Escaping the Delta: Robert Johnson and the Invention of the Blues and How the Beatles Destroyed Rock 'n' Roll: An Alternative History of American Popular Music. His work has appeared in The Boston Globe and a variety of other publications, and he also is a musician who has toured as a guitarist and singer.

Q: You write, “Why does what one musician played on one evening continue to resonate half a century later?” Why do you think it does, and why did you decide to write this book?

A: The short answer to the second question is that since I was a kid I've been hearing and reading arguments about what happened that night, so obviously people are interested, and I wanted to see if I could sort it out.

Once I started looking into it, though, I got more interested in all the reasons why people felt strongly about Newport and about Dylan going electric and about the crowd's reaction--so it actually turned into a broader and more interesting book (to me, at least) than I expected when I started.

As for why it still resonates, one reason is simply that Dylan is still such a major figure. The story about him getting booed at Newport has also become kind of a parable--when a musician tries something new and his or her fans are disappointed, people often point to that night as an example of artists being ahead of their fans.

And it has also become a symbol of that moment in the 1960s--the young rocker rebelling against the conservative old folkies. As it happens, I think that has been misunderstood and the story was a lot more complicated...and I guess that's really what the book is about. 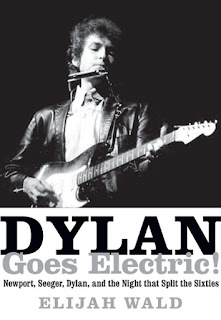 Q: In the book, you juxtapose Dylan with Pete Seeger. How do you see the dynamic between them?

A: It changed a lot over the few years between 1961 and 1965. At first, Dylan deeply admired Seeger and Seeger acted as a sort of mentor to Dylan--not hovering over him, giving him advice, but introducing him to people and bringing him onstage, and then being one of the first and most prominent performers to sing Dylan's songs.

But Seeger was always primarily interested in creating, supporting, and being part of broad movements--whether artistic or political, or both--while Dylan was always a loner, not a joiner.

To me, that is at the core of the bad feeling at Newport in 1965: the break between young artists who wanted to go their own way and other artists--some older, some equally young--who felt the music should serve a communal, progressive movement or spirit.

Q: What do you see as the biggest influences on Dylan’s music in the period leading up to 1965?

A: The thing about Dylan is that even more than most young artists, he had a very broad range of tastes and interests, and they kept changing. 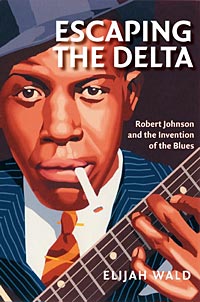 Rock 'n' roll was always part of his mix, from his days fronting a band in high school to the moment he brought a band onstage at Newport--that's one of the things a lot of people don't understand: his first album was filed as "folk music," but the liner notes named Elvis, Carl Perkins, and the Everly Brothers as important influences, along with Woody Guthrie, and blues, and the New Orleans jazz pianist Jelly Roll Morton.

At that point a lot of people were calling him a blues singer, and I think in a lot of ways that's right and is kind of the key to the story: as a folksinger, he was always deeply influenced by blues, and when he went electric he was still working with blues musicians and singing pretty much the same kind of material.

Of course, he also sang a lot of other stuff, and he continued to grow and change very quickly, but blues is very much at the center of the story I tell in the book.

That's one of the big things people have tended to misunderstand: Dylan often gets described as having spent the previous few years as a folksinger, grouped with Joan Baez, Seeger, and Peter, Paul, and Mary--but none of them had any serious blues influence, and that was where he always seemed to be most comfortable and most himself.

Not surprising, considering that he started out singing Little Richard hits, all of which are straight-ahead blues.

Q: What is Dylan’s musical impact and legacy today, 50 years after the time period you write about? 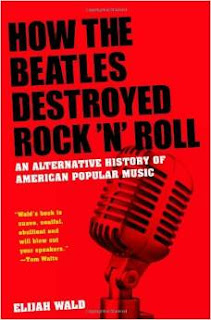 A: For most people, of course, it's the songwriting: he pretty much invented what is now called the "singer-songwriter" aesthetic, the idea that a serious artist sings his or her own compositions, and as a songwriter he opened a door for people like Joni Mitchell, and Leonard Cohen, changed the direction of the Beatles and the Rolling Stones, and you can follow that through to Kurt Cobain, Alanis Morissette and a million other singer-songwriters.

That's generally considered his most important impact, which is why his story is always told in terms of his development as a songwriter--and I don't disagree with that, at all. But...

In this book I'm telling a different story, because his decision to "go electric" was not about songwriting, it was about his skills, tastes, and ambitions as a musician--his understanding that he could be as raw and tough as the Rolling Stones, and had even deeper roots in the American blues tradition.

If you listen to his first couple of albums in the 2000s, Love and Theft and Modern Times, you still hear him mining the blues tradition.

That's not what inspired "Blowin' in the Wind" or "Masters of War," and it's not really the aesthetic of Blood on the Tracks--which for a lot of singer-songwriter fans is his greatest album--but it is very much what impelled him to team up with the Butterfield Blues Band at Newport that night, and there are a lot of young "roots" or "Americana" artists these days who are following in those Dylan footsteps, the ones that lead from Robert Johnson and Hank Williams to Jimi Hendrix, Bruce Springsteen, and modern groups like Alabama Shakes.

A: I just took a side-trip into grad school--I only had a year of college, and wanted to learn how to read academic writing and maybe do some teaching--so between that and this book, I've been kind of busy for the last few years, and now want to take a little time to play music, do some gigs as a guitar player, work up a duo with my wife, Sandrine, who plays clarinet...

As for writing projects, there are a bunch on the back burner: one is looking for the roots of blues and rap in censored African-American songs (I've been going through archives of unpublished material collected in the early 20th century); another is a book on the first Freedom Ride (I got immersed in the early Civil Rights movement as part of the Seeger/Dylan/Newport story, and kind of want to pursue that some more); another is turning my dissertation into a book, which is about bilingual music and Chicano culture in the Southwest.

A: Just that I think of this book as a story about two major figures in American music, and about a time--and I tried to tell that story in a way that held together and made sense, and that would be interesting and exciting.

If it accomplishes one or two things, I would like for it to give people who never heard Pete Seeger live an idea of who he was and how important he was, and prompt people who always thought of Dylan as primarily a songwriter to think about what he did as a musician.

And to give a sense of how different the early 1960s were from "the sixties" that became a cliche: this whole book happens before the Beatles recorded Sgt. Pepper, or the Vietnam war had become a major issue for young people, or most people knew what LSD was.