Ronald Goldfarb is the author of the new novel Courtship: A Novel of Life, Love, and the Law (under the pseudonym R. L. Sommer) and the editor of the new book After Snowden: Privacy, Secrecy, and Security in the Information Age. His many other books include Perfect Villains, Imperfect Heroes and In Confidence. He is an attorney and literary agent based in Washington, D.C.

Q: How did you come up with the idea for your novel Courtship, and why did you decide to write it under a pseudonym?

A: It’s a strange story. From the time I left Yale Law School and started my career, I was writing pretty much straightaway, on subjects I knew about, all nonfiction. It grew out of my work as a lawyer.

I never dreamed I had the skills to write a novel; it was never my plan. I wrote it years ago, while recovering from an injury. I was reading The New York Times, and saw the list of winners of the Rhodes Scholarship. A light bulb went off, and I ran to my writing desk.

The book starts off with two unlikely lovers winning the Thayer Award, and [finding] lifelong love. I ran after this thing like it was a movie I hadn’t seen before. It was done in three weeks... 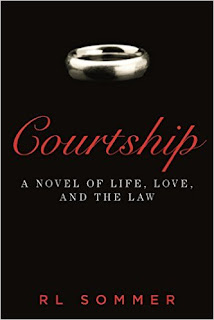 I didn’t think of it as something to send to publishers. I viewed it as my love child. I loved it…At one point…I realized it was [the character] Anne’s story. I thought, a man can’t write from the perspective of a woman, [so] I added a prologue and epilogue. I put it away but would bring it out from time to time.

Flash forward 10 years, and I’m dealing with ABA [American Bar Association] publishing. Our firm sold a number of books to ABA, and the editor said we’re starting a new imprint of fiction, and we’re looking for the right book to start it off.

A light went off in my head, and I said I have one. I didn’t want him to be polite, or reject it [because of my connection]. I said, I have a client, and I could send it to you. I said he’s writing under a pseudonym; I can vouch for him.

I had to make up a name, and my grandmother’s name was Rose Sommer. I said, R.L. Sommer. I sent it off, and I thought that would be the end of it…I sent it to [Ankerwycke editor] Jon Malysiak, and he said, We love it! What’s its title?

I had to think of a title. I had finally shown it to my wife and daughter, and my daughter said, "Courtship." I said, that’s the perfect title.

It was as much a surprise to me as anything I’ve done. I’m halfway through a book of short stories, under R.L. Sommer. It’s puzzling and I can’t understand it. I’m trying to figure it out myself...

People asked, is this an autobiography of your career?...I realized, it isn't what you've done personally--none of these things happened to me--but it is what you know....

Q: How does the process of writing fiction vs. nonfiction compare for you?

A: [Fiction] is all pleasure! Nonfiction is work…when you’ve started off, you think, This is a rich subject, but once you’ve had the inspiration, which is fun, the rest is work.

This was total pleasure. I felt I was turning on the projector of a movie, and I didn’t know the ending. When I would have to turn it off, I couldn’t wait to get back to it. I had no sense of what happened next.

Q: So you didn’t have an outline or anything like that?

A: Nothing. It originally began with the announcement of those two people winning the Thayer Award, a lightly disguised Rhodes Scholarship. I had to make up their names…it was totally a work of imagination—what might these two people talk about to make a lifelong alliance?... 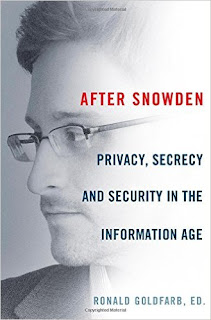 Q: I also wanted to ask you about your new work of nonfiction, After Snowden...

A: It couldn’t be more different [from Courtship]! When the [Edward] Snowden case burst, everybody was interested in it. My last book was on the subject of confidentiality. I thought, Everybody is interested in the Snowden case, but even the progressive community was hostile to him in a way I was kind of surprised about.

Whether or not he’s a devil or an angel, it’s interesting to take subjects his situation raised and find the best people to write about them…

Everybody was asking me what’s your view, so you had to have a conclusion. The conclusion is really mine—he is more angel than devil. He is a historical figure. He broke the law, but…civil disobedience is civil disobedience. [His actions] can be balanced by the good that comes from it…this guy did it for patriotic purposes.

Q: What do you see as some examples of the impact of his actions?

Obama appointed a high-level review panel that proposed reform measures…Congress moved to change the Patriot Act, and the General Assembly of the U.N. has held that prevailing rules on cyberspace and international surveillance have been violated…

Remarkable changes have happened…it isn’t just the ACLU upset by what the government has been doing. We’re now reexamining the world’s rules on cyberspace, privacy, encryption.

If Snowden’s purpose was to reveal…misbehavior on the part of our government and others, he accomplished that….