Pamela Katz is the author of the new book The Partnership: Brecht, Weill, Three Women, and Germany on the Brink.  A screenwriter and novelist, she teaches at NYU's Tisch Graduate Film Program and she lives in New York City and Berlin.

Q: Why did you decide to write about Bertolt Brecht and Kurt Weill?

In the particular sense, you can’t put your little toe into the Weimar Republic without being fascinated forever…what surprised me was the fact that this book was not already written!...

They wrote "The Threepenny Opera," which transformed musical theater. They wrote "Mack the Knife." Here were two men whose artistic collaboration defined the Weimar Republic.

A personal, passionate story can illuminate [the times]. You don’t have to leave them to achieve that.

Q: You write, “What was so critically important about accessible art? Why did Brecht and Weill, and so many artists of their generation, believe in the power of music, theater, and painting…?” How do you answer that question?

A: Accessibility of art is something one could write many books about!...It’s hard to remember the time when, at the beginning of the 20th century, the idea of the concert hall was populist; art was often created for the monarchy. In Brecht’s and Weill’s time they wanted to go a step further, and bring the opera house to the people. Modern art would bring it back to its roots…

Q: The book is titled "The Partnership." How would you characterize the professional partnership between Brecht and Weill, and how did they get along personally? 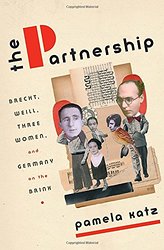 A: That speaks to the triumph and tragedy of their collaboration. The artistic partnership was the inevitable collision of two geniuses. Brecht was very musical, and wrote poetry with an ear for music. That’s what Weill recognized…Weill was very literary.

They were two very young men who were prodigies from an early age. They had to meet—they respected each other in ways neither had respected partners before. They come together, and the first things they touch are genius.

What happened? They didn’t get along. Weill was kinder, more outwardly diplomatic. He was married; he was faithful. Brecht was a famous womanizer, he was used to dominating publicly.

There were conflicts about the role of political art. There was enough shared territory that their different personalities might have been overcome. What got in the way was they could not conquer the notion of artistic hierarchy.

Composers always dominated over librettists. Brecht wasn’t just a librettist. Weill wanted to be an opera composer. Neither was willing to accept a subservient position to the other. Each one had to dominate creatively, and neither would accept that…

Q: What roles did Lotte Lenya, Helene Weigel, and Elisabeth Hauptmann play in the partnership?

It was impossible to tell the personal story of Bertolt Brecht and Kurt Weill, or their artistic story, or their political story, without including the women. They are completely interwoven. It was the ‘20s, an important time for women’s independence. The accomplishments they achieve are another portrait of the time.

Helene Weigel was an upper-middle-class Jewish woman. Her parents didn’t want her to be an actress, but she was determined. She was trained to be independent, and she goes to Frankfurt. By the time she was 21, she was working with the greatest theater directors.

She has an incredible power on stage, and she caught Brecht’s eye…she was the first woman who figured Brecht out. She found a way to understand his work, the politics, and his domestic needs…

She was no martyr; she understood everything about him, and made it possible for him to work. She didn’t want a bourgeois family situation, and she was willing to accept the pain.

She was not only his faithful assistant but also his lover…As to Elisabeth Hauptmann’s suicide attempt in 1929…the fact of her attempt was not confirmed—the fact that she hinted at it in her short story (unpublished in her lifetime) made only one thing crystal clear: she wanted people to believe that she attempted it.

This was something I found far more interesting than trying to guess at something we can never know for sure. Whether or not she was that unhappy about Brecht’s marriage to Weigel, the “fact” is that she was a creative person who insisted upon controlling her own legacy. If there were rumors or anecdotes to be repeated after her death, she wanted to be in charge of them…

Lotte Lenya was the most colorful. She was Kurt Weill’s wife. She grew up to nearly illiterate parents, and left home at 14 and never came back. She was self-educated. She was not a trained musician, but she had a phenomenal memory and a great ear, and she made his songs famous. She’s the one who, in America, we know the best.

A: I’m working on a couple of things. One is a project with [German director] Margarethe von Trotta. We have done three films, all historically based, serious films. A year and a half ago, we asked, “Don’t we deserve a comedy?” [and we thought,] “Now’s the moment!” It will be a German-based film, but likely in English, and it will take place in America.

I’m working on another script about a historical subject, about the 1967 war in Israel, which is one difficult subject. I’m finding my way through that maze, [working] with a terrific Israeli director, Avi Nesher.

I agonized over the style in which to write the book. I had thought nonfiction would be easier because you don’t have to make anything up. I was naïve. You have to find the story.

I wrote it [in the way] biographers I admire so much [write]—stick to the facts, but find a story. You have certain instincts about what people are like, and then you have to prove it. There are 900 footnotes; if you’re going to tell it in an entertaining tone, you have to remind people the facts are correct!