Mia Alvar is the author of the new story collection In the Country. Her work has appeared in a variety of publications, including One Story and The Missouri Review. Born in Manila, she grew up in Bahrain and the United States, and she lives in New York City.

Q: Your stories take place in a variety of locations. Are there some settings that you especially like to write about?

A: I don’t have a “favorite” setting, but I do have a special love for the process of taking apart a real-life place and reconstructing it as a completely separate, fictional world on the page.

In some ways, the Manila and the Bahrain and the New York City in my book are distorted and as imaginary as any place you’d find in a sci-fi or fantasy novel: I’ve exaggerated some features and erased others, adding details and even inventing customs when I felt the story demanded it.

In fact, the moments I felt most “stuck” while working on In the Country came when I chased after accuracy—obsessing over the distance between point A and point B on a map, for instance.

The book is full of invented place names—like Mabini Heights in “The Kontrabida” and Batanglobo Village in the title story—which was my way of reminding myself that this was fiction and giving myself permission to take liberties.

Q: Do you usually know how a story will end before you start writing it, or do you make many changes along the way?

A: I rarely know how a story will end beforehand. More often, I start writing with a “What if…?”-type question in mind, and explore different pathways as I’m writing. I throw out at least two-thirds of every story before ever figuring out what should actually happen in it.

My goal is always to get to know my characters and the world they inhabit well enough that the ending, when it comes to me, feels inevitable. I can’t always make that happen within the time constraints, but in some of the stories of In the Country, I think I got there. 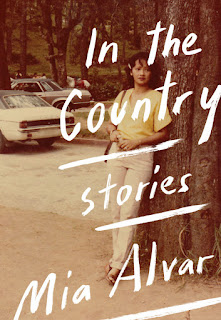 Q: Many of your stories include family dynamics as well as a backdrop of politics and societal developments in the Philippines. What do you see as the right mix of the personal and the political?

A: In real life I see very little separation at all between the personal and political, which intersect and shape one another all the time, but capturing that blend in fiction is one of the hardest things I’ve ever tried to do.

Some of my favorite books over the years have been ones that bring history home, reminding me that politics isn’t something that only happens “out there,” in legislative halls or on the news, but that plays out in people’s daily lives, while they shop for groceries and put the kids to bed.

Similarly, I wanted political and historical material to play a subtle and organic role in my stories, while still coming across as clearly as possible to the reader.

The title story, which takes place in Manila in the 1970s and '80s, really tested me. I couldn’t afford to be vague about the political turmoil happening in the Philippines at that time—especially since one of my main characters is a reporter whose job and passion is to cover those events—yet I always wanted "In the Country" to remain an intimate, human story of what one family goes through, and not to sound like a recycled news account or encyclopedia entry.

I don’t know if there’s a formula for “the right mix,” but a friend of mine once reminded me to “Go to the body” when struggling to personalize history. She attributed this advice to Charles Baxter, which for the record I haven’t been able to verify.

But either way I think it’s helpful, in thinking about this balance, to return to a character’s flesh and five senses as a way to shed light on his or her political context.

A: More than I can begin to count! Sandra Cisneros, Ralph Ellison, and Toni Morrison were early inspirations, as were Junot Díaz and Jhumpa Lahiri.

A: I’m working on a novel that follows Milagros, the main character in the title story of the collection, and her life after the events of “In the Country.”

A: Here’s a fun* fact (*at least to me). Pretty early on, I abandoned the idea of “linking” the stories in any direct way. While there’s a lot of geographical and thematic overlap throughout the collection, there are no recurring characters or explicit plot connections from one story to the next.

But very recently, long after final edits were in, I realized that Esteban Sandoval, in the collection’s very first story, shares a last name with Milagros, in the last story (at least before she marries Jim and becomes a Reyes).

I’d forgotten that they were siblings in old, very early drafts of both stories, and perhaps they still are. So in this tiny, vestigial way, the final story in the collection does loop back to the first.