Ann Putnam is the author of the memoir Full Moon at Noontide: A Daughter's Last Goodbye. Her work has appeared in a variety of publications, including Hemingway Review and Western American Literature. She teaches at the University of Puget Sound, and she lives in Gig Harbor, Washington.

Q: Why did you decide to write this memoir about the old age of your parents and uncle?

A: I am astonished that I could write a book such as this, as I have always feared and dreaded old age. And so writing a book about it was never my intention.

Yet as the days passed and I watched my parents and my uncle get through those days and weeks and months, it was so clear inside the writing of it how much courage they showed to greet every day with hopefulness and not dread.

I know it sounds a bit clichéd, but my oh my. When you look closely at all the little assaults and affronts older folks face every moment, and you do, because you’re holding on for dear life to watch this, you see how valiant your loved ones have become…

Q: In the book, you ask, “What consolation is there in growing old, in such loss?” What is your answer?

A: There is an aura of sacredness that surrounds people when they become old. They don’t see it, of course, or probably even feel it. But those who love them find a distillation of what is and has been the very best in them.

It shines forth even through the rough patches, which if one is very lucky, one can find humorous in a truly healing way. My book describes a number of these, and when I give readings I always include a few. But I have to tell my audiences that they have permission to laugh at them, because laughter can heal us all.

I remember my copy editor, who was responsible for putting the comma in and taking it out, wrote that he was saying prayers for me for all the sadness I had lived through.  I was shocked, and said, “Oh, but there was so much that was funny too!”… 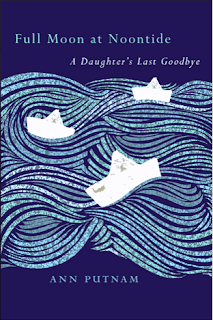 Q: How long did you work on the book?

A: Looking back on it now, it feels as though it took forever and also that it took just months. The truth, of course, is somewhere in between. So much life kept happening as the time of writing drew on. During those months when I thought I was writing a book about “the twins,” my mother became ill and died. And then months later, my husband also.

It feels strange to write this down even now. So factual! There is no way to measure the time it took, I don’t think. Writing time, living in that creative yet wrenching place, is not really quantifiable in the usual way. Am I evading the question? Ah, yes. So I’d say if pushed, five years.

Q: How difficult was it to write about so many losses?

A: Well, it was all difficult to be sure. My book began as an essay about my father’s death I was preparing for a conference. This was just months after he died, and of course it was way too soon to be writing about such things. This comes late in the book as it evolved, but it was the first thing I wrote, before I knew it would even be a book.….

If it isn’t too much of a stretch, I would say that the very hardest part was also the most joyful. I wrote an “Epilogue” to the book while my husband was dying of cancer. He was on the couch in the living room, and I’d set up a little cramped desk in the dining room to write, as my office was downstairs and I wanted to stay close to him.

This “Epilogue” became a love poem in prose to him, which he never saw, and which to this day, I do not know how I was able to write….

A: I’ve recently completed a literary novel called Cuban Quartermoon, which includes elements of magical realism, as one might expect in a novel set in Cuba.

It came out of a trip to Cuba for a Hemingway colloquium sponsored by the Cuban Ministry of Culture, the first of its kind. An old Cuban proverb says, “Believe half of what you hear in Cuba and none of what you see.” So I returned to Cuba five more times, each time finding it a place of haunting beauty, sorrow and fear…. I am currently looking for a publisher.

In the meantime I’m finishing revisions on an earlier novel called Incantation. I don’t think I will ever write another memoir. After I’d finished Full Moon at Noontide, I rushed right back to fiction.  Of course in fiction you don’t run away from your life so much as run straight into it.

A: I think the most I can say is that writing is a way of being in the world that puts us fully present in life rather than causes us to withdraw from it.   That may sound counterintuitive, because I think many writers feel the isolation of the writer’s life deeply at times and wonder if their sacrifices are worth it.

While my husband was dying, I wrote the “Epilogue,” as I have described above. After he died, I was so tired, and felt such emptiness and sorrow that I saw myself and my world shrinking into a little speck of nothing. I saw myself staying in my pajamas all day, afraid to go out of the house, quitting my job, becoming this tiny half of a person searching for the other half who’d gone inexplicably missing.

But six weeks later I was scheduled to give an hour-long talk in Colorado and had no choice but to write it, pack my suitcase, get on a plane, and then finally to walk up to the podium and read what I’d written from my deepest heart.  And I did.

My webpage is annputnamwriter.com. My book can be ordered through Amazon.