Jessica Knoll is the author of the new novel Luckiest Girl Alive. She has worked at Cosmopolitan and Self, and she lives in New York City.

Q: How did you come up with your main character, TifAni?

A: I took a short story writing class at NYU several years ago, when I was just starting out as an editorial assistant at Cosmo. I had been writing in the Cosmo voice for a year and I just wanted the opportunity to flex different kinds of writing muscles, and Hearst (which publishes Cosmo) was willing to pay for the course, so I jumped at the chance.

There, I wrote a short story from the perspective of a girl I went to college with, who had done a terrible, criminal thing. She could never own up to what she did, and the victim never pressed charges, and she carried on as if nothing had happened.

I put myself in her brain—what was she thinking, how did she justify her behavior? I remember the professor praising the voice, saying it was really edgy and unnerving, and it was really Ani’s voice, the very beginnings of it.

Q: The book's title is "Luckiest Girl Alive." What role do you think luck plays in this novel? 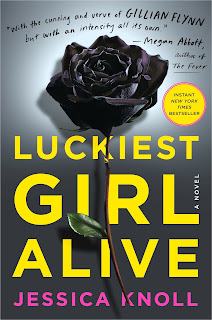 A: The title riffs on the commonly used hashtag, #LuckyGirl. A lot of girls use this hashtag on social media when they get engaged, married, or receive flowers from their significant other on Valentine’s Day. Ani, on the surface, is that #LuckyGirl. But you come to find out that it is all a façade—she is anything but the luckiest girl alive.

A: I always knew what the last line of the book would be, even before I sat down to write it. I knew where it was going and where it would end, but a lot of what transpired in between were things I worked out in the writing process.

A: Gillian Flynn inspired me so much. I remember being a 24-year-old assistant at Cosmo and receiving a galley of her second book, Dark Places.

I went home and read it in one weekend, and then immediately devoured her first novel, Sharp Objects, after that. I had never read novels like hers, and it helped me realized that I wanted to write something with grit as well.

But John Searles, whose most recent book, Help for the Haunted, came out two years ago, was the author who inspired me to put pen to page. I was his assistant at Cosmo, and he recognized my talent and always encouraged me to write on the side. He would gesture at all the books piled up in the books closet, and say if all these people can do it, you can do it too.

A: Right now I am writing the script for Luckiest Girl Alive. The book has been optioned by Lionsgate with Reese Witherspoon and Bruna Papandrea attached to produce. I am having so much fun with the dialogue. We really want her to have this Patrick Bateman quality, but from the female perspective.

And I am nursing an idea for a second book. I wrote 100 pages over the winter, decided I hated it, and threw it all out and started over again. But that happened to me with book one too, so I know it’s just a part of the process!