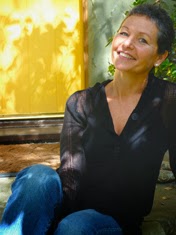 Q: How did you come up with the characters of Danzig and Merav in Blue Nude, and what do you see as the role of art in the story?

A: Inspiration for my second novel, Blue Nude, emerged from a blending of two very different yet ultimately related life experiences.

First, I was curious about exploring my memories of working as an artist's model (during my undergraduate years at Stanford).

And second, I was profoundly impacted by my participation in a series of workshops called Acts of Reconciliation. Led by a drama therapist named Armand Volkas, this project brought together Jewish descendants of Holocaust survivors (like myself) and German descendants of Nazis, in order to confront our "shared legacy" from the Second World War. 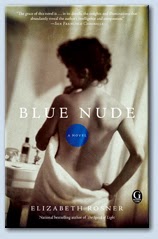 Eventually I realized that creativity was an essential ingredient in transforming my own inherited grief and trauma. The complicated and hopeful relationship between the characters of Danzig and Merav --- while not meant to represent entire categories of people, whether Germans or Israelis --- reflects my belief in the healing power of art.

I can say a lot more about how that particular truth is revealed in the book, but I hope readers will discover the process for themselves!

Q: On your website, it states,"Ms. Rosner's writing reflects her efforts to come to terms with the impact of her parents' experiences [as Holocaust survivors] on her own life, the indelible imprints of their history on her language, her identity, and her imagination." What are some ways in which this subject has affected your work?

A: My first novel, The Speed of Light, took me 10 years to write. I tell people that the book is "emotionally autobiographical," by which I mean that the events and characters and storyline aren't entirely fact-based but do reflect my own inner experiences and insights.

All three of the featured characters in The Speed of Light are intensely affected by tragedy in their family; each one finds a distinct way of coping with those effects. Two of the protagonists are a brother and sister who grew up with a Holocaust survivor father, and the third main character is a refugee from government-sponsored massacres in Central America.

As the epigraph to that book says, "Hasidic teaching says there are three ways to mourn:  through tears, through silence, and by turning sorrow into song."

My poetry collection Gravity is very much focused on post-Holocaust material as well. I call it the "autobiographical companion" to my novels.

The poems contain ghost stories, incomplete conversations, unanswerable questions, unforgettable images, and resonant echoes. While all of these qualities can be said to relate to the Holocaust, I also believe that most families have their own secrets and sorrows.

Each time I write about being a daughter of Holocaust survivors, I think that I'm finally "finished" with the subject. Yet somehow, more layers keep revealing themselves.

A: In truth, I am inordinately fond of all of my characters.  But I have a special affection for the character of Sola, from The Speed of Light. She is a kind of role model for me, in the way she has learned how to live in the present, while holding the past very gently in her open hands.

Q: Do you prefer one form of writing to another?

A: Each form has its own challenges and rewards. I love the density and brevity of poetry, and I love the elongation and evolution of long fiction. Essays force me to figure out exactly what point I want to make, and why.

It seems to me that all forms of writing can provide a chance to get to know myself and the world in an intimate and illuminated way.
Q: What are you working on now?

A: I'm revising (for the hundredth time) my newest novel, Electric City. It will be published in October 2014.

A: In addition to writing books and articles and poems, I also lead writing workshops in all sorts of beautiful locations. Weeklong retreats in Montana and on Martha's Vineyard, for example. Next year, I'll be on faculty at a writers conference in San Miguel de Allende, Mexico, and another one in Mendocino, CA.

Also, I truly love meeting with book groups, whether in person or via Skype!