A.X. Ahmad is the author of the new novel The Caretaker, the first in a planned trilogy. He also has written under the name Amin Ahmad. Originally from India, he graduated from M.I.T. and spent many years working as an architect. He lives in Washington, D.C., and teaches at The Writer's Center in Bethesda, Md.

Q: How did you come up with your main character, Ranjit Singh?

A: One real-world incident was in the back of my mind when I began to write this book. Right after 9/11, I went to my supermarket in Cambridge, Mass., and a lot of the cashiers were Sikhs. They were very scared that they would be mistaken for terrorists, so one man had put a large sticker of the American flag on the front of his turban. That memory stayed with me.

Sikhs, with their beards and turbans, are hyper-visible in America at a time when people are more and more xenophobic. In my book, I wanted to explore what it felt like to be an immigrant in post-9/11 America, and so I chose a Sikh protagonist.

Q: The Caretaker is the first book in a planned trilogy. Did you know from the beginning that it would be a trilogy, and are you still working on the other books now?

A: Yes, I planned it as a trilogy, which allows me to follow Ranjit, as he tries to find his place in America. Each book explores a different immigrant community.

I just finished writing the second book, The Last Taxi Ride, and it will be published in 2014. In it, Ranjit is working as a cab driver in New York and is accused of the murder of a famous Bollywood actress who is now living there.

The third book, which I’m currently writing, is Gandhi Motel. It’s set in a historically Sikh farming community in northern California. Ranjit is running a motel there when he gets involved with a plot involving a white supremacist group.

Q: You write on your website, "I am, like Ranjit, a ‘nowhere man’, a strange hybrid of Indian and New Englander." How does this theme play out in the book? 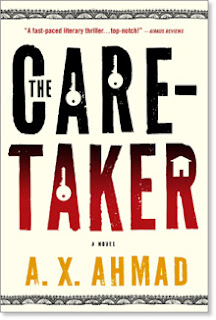 A: I came to the U.S.A. from India when I was 17 and the question always was: what was I going to write about? I could write about my life as an immigrant here, but that had already been done so beautifully by writers like Bharati Mukherjee and Jhumpa Lahiri.

Writing a thriller allowed me to move beyond the material that an immigrant writer is confined to. I didn’t have to write a nostalgic tale of the “old country” or an immigrant novel about assimilation. So this genre allowed me to weave the two worlds together.

Q: You also have written short stories and essays under the name Amin Ahmad. Why the change to A.X.?

A: When I wrote for literary magazines, under my own name, agents often read my literary work and were interested in it, but when I told them I was working on a suspense novel, they seemed to quickly lose all interest! I came to realize that there was a huge split between the literary world and the genre world.

So when I sent out my suspense novel, I chose to call myself ‘A.X. Ahmad’. I figured that way, readers wouldn’t get the two genres confused. And in the future, if I write something literary, I can use ‘Amin Ahmad’. It can be an open secret, but the name on the book can signal to readers what they’re getting. (My model here is the literary writer John Banville, who writes amazing mysteries under the pen name Benjamin Black.)

Q: In addition to your writing career, you've also worked as an architect. Do you see any links between architecture and writing?

A: I’m grateful for my training as an architect. I used to manage multi-million dollar construction projects, so I’m used to working within a large creative team, and managing people and getting them to do things. Architecture toughened me up: I had to work for clients, I had to sell my services, I had to go back and revise and change designs. So when faced with getting an agent or publicizing my book, I put on my project manager hat, and get to work.

That’s not to say that I like it - I don’t. If I could hand it off to someone else, I would, and just spend my days writing. But writers don’t have that luxury any more: we have to do a lot to sell our books.

A: I consider myself to be a storyteller, first and foremost. I love beautiful writing, and read a ton of literary fiction, but language for language’s sake does not interest me. The writer has to tell me a story, and carry me into their world.

I’m also very interested in plot and structure: being trained as a designer, the architecture of a novel fascinates me: I like to take them apart, like taking apart a clock, and see how they work. One of my favorite novels is Tinkers by Paul Harding: it’s a jewel box of a novel: gorgeous prose, and incredibly artfully constructed.