Minka Pradelski's first novel, Here Comes Mrs. Kugelman, has recently been published in the United States. She is a sociologist and documentary filmmaker who has studied the impact of the Holocaust on survivors--including her parents--and their children. She lives in Frankfurt, Germany.

Q: Why did you decide to write Here Comes Mrs. Kugelman?

A: At the end of an interview I conducted with a survivor in Mannheim for the Steven Spielberg Shoah Foundation, the survivor asked me to not forget Będzin, his town, in which he was born and grew up. He told me he had friends from Będzin, survivors like himself, who live in Israel and whom he would love me to interview. His request affected me deeply, and I could not get it out of my mind.

Months later, during a trip to Israel, I drove to Jerusalem and interviewed one of his friends. After our first talk I was fascinated by this little Polish town. On my flight back to Frankfurt I felt as though I held something precious in my hand – raw diamonds that I absolutely had to cut. I just didn’t know how. And that’s how Mrs. Kugelman emerged.

Q: What do you see as the importance of telling stories, particularly in the aftermath of the Holocaust?

A: We have lost so terribly much in the Shoah. With the long complicated silence of our parents we children of the second generation are cut off from the stories of our own families. What did the village look like, the city, the life of our parents and grandparents? Here and there what we heard was never more than a small piece of the puzzle. I felt compelled to revive this vanished world a little bit with the narrations of Mrs. Kugelman. 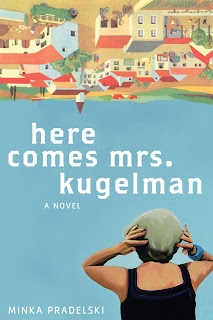 Q: What is the significance of your character Tsippy’s passion for ice?

A: Tsippy is a zany young woman. She lives largely on frozen food because inside she is iced up and raw. It is not until the stories of the rather brash Mrs. Kugelman warm her up that the ice crust she lives in slowly begins to melt.

Q: What about Będzin in the book is real, and what is fiction? How did you combine the two?

A: The historical facts, the actual locations, are the pillars of the novel, around which the fictive stories and characters are woven, but the melting together remains a little secret…

A: At the moment I’m working on a new book. Its focus is the time immediately after the collapse of the Nazi regime—the time “after,” the next days and months, years. Most of those who survived were quite young people. How did they reinvent their lives? What was romance like?

A: I am very happy about the publication of Here Comes Mrs. Kugelman in the U.S. When I was a little child we lived in New York for a while. My parents were so proud to finally be allowed to travel to the States. I remember vividly how my two sisters and I received checkered blouses and little red handbags for the passage in the gigantic ship, so that we could feel like Americans as soon as we arrived. And now “Mrs. Kugelman” has also arrived in America!