Katie Hafner is the author of the new novel The Boys. Her other books include Mother Daughter Me. Her work has appeared in a variety of publications, including The New York Times and Esquire. She lives in San Francisco.

Q: What inspired you to write The Boys, and how did you create your character Ethan?

A: In the summer of 2017, I was on a bike trip in Scandinavia with my daughter. It was one of those trips where they take your luggage from one destination to the next, and you stay in really nice hotels and eat delicious food.

During one of those delicious meals, one of the guides told a story that I found intriguing, and so did my daughter, because she said, “Mom, that’s a novel.” And so I wrote it. I knew only the barest of facts and let my imagination take it from there.

I knew I wanted the main character to be a man -- an anxious man who hasn’t integrated very successfully with the outside world. Then I just let him develop from there.

Q: The writer Laura Zigman said of the book, “Hafner is a wry and wise explorer of the secrets buried deep in our most intimate relationships.” What do you think of that description, and how would you describe the relationships in the novel?

So, I created relationships for him that would help him connect to the wider world, the most important being with Barb, his wife, who's empathic and outgoing. She becomes Ethan's sturdiest spoke. It's Barb who shows Ethan that intimacy and connection needn't be dangerous, and can be wonderful and rewarding. 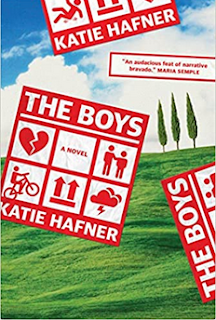 That central Ethan-Barb relationship plants the seeds for more connection in Ethan's life. Tragically, so deep is Ethan's bond with the two boys he and Barb foster that he drives Barb away. And yet....

A: I knew generally how it would end but I got stuck on just how to pull it off. There had to be a plausible ending, and filling in the gaps with just the right particulars was a challenge. I hope you think it works!

Q: The novel is set in the Philadelphia area, and also in Italy. How important is setting to you in your writing?

A: Setting is super important to me. I chose Philly because I wanted an East Coast location, and although I’m not from Philly, my husband went to undergrad and medical school there, and when I was working on the book my daughter was living there.

There’s a key role played by the Mütter Museum in Philly, which was another reason to set it there.

I also wanted to find just the right house for Ethan and Barb to live in, and I found it in west Philly. My husband and I were admiring the house from the outside one day when the owners came walking up the street, and they gave us a tour.

Italy is important as a setting because it’s such a magical place: the hills, the villages, and the little churches everywhere. So I set Ethan and Barb’s honeymoon there in the first half of the book, then had Ethan repeat the trip with the boys, as he tries to recapture the magic.

I’m getting back to a book I started in 2015, which has a story I really love. It’s a low-key (no one is threatening to blow up the world) science thriller. But the plot is very intricate, the story multi-layered.

When I started that book, I realized it was a lot to take on as a first novel, so when the plot for The Boys fell into my lap, with a much cleaner narrative line, I put the first book aside. I think I’m ready now to take it on.

I’m also very busy with the podcast I produce, Lost Women of Science, which we publish in partnership with Scientific American.

And I’m working on a collection of essays about taking up the game of golf later in life in order to spend more time with my husband. Strange, I know.