Johnnie Bernhard is the author of the new novel Hannah and Ariela. Her other books include Sisters of the Undertow. She is a former English teacher and journalist.

Q: What inspired you to write Hannah and Ariela, and how did you create your character Hannah?

A: I am fortunate to own a home in central Texas, approximately 100 miles from the Texas/Mexico border. I subscribe to the weekly newspaper of Junction, Texas, The Junction Eagle, which began reporting incidents of human trafficking several years ago. Many of the victims were brought from Mexico into the US.

I began researching human trafficking and soon learned it was a humanitarian crisis. The Louisiana Department of Transportation reports every 30 seconds someone is made a victim of human trafficking. Human trafficking in Mississippi is rated number two in the nation according to incidents reported.

Public restrooms at rest areas across the nation post the National Human Trafficking Hotline of 1-888-373-7888 for reporting suspicion of human trafficking. Public awareness and reporting are how we help these victims.

The human trafficking corridor is I-10, running from San Diego, California, to Jacksonville, Florida. Many of the victims are young girls who are kidnapped from small towns, shopping malls, and/or other public places to be used in sex trafficking. It is a horrendous crime.

As a mother and a woman, I felt compelled to research and write this story. The social media hashtags are #SOS #SaveOurSisters #SalvarNuestrasHermanas.

Hannah was developed as a character who addresses the issues of ageism and our society's view of older women. Their lives seem less significant. Hannah is able to change this prejudice through her individual acts that are motivated by her conscience and not what society deems as appropriate for someone her age.

The novel begins with the quote: “Cursed be anyone who perverts the justice due to the sojourner, the fatherless, and the widow.” Deuteronomy 27:19. I structured my storyline around this quote. The most vulnerable among us are the fatherless, the widow, and the traveler in a strange land.

Q: You tell the story from a variety of characters' perspectives--did you write the story in the order in which it appears, or did you focus on one character at a time before turning to the others? 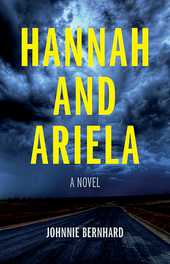 A: I began the story with Hannah, the protagonist. In the many drafts that followed, I realized each character had a unique perspective to tell.

From that, I began writing each character's perspective in first person narrative. This allowed each character to address the action and characters he or she was reacting with. It was a challenge as a writer, but I believe it makes for better storytelling.

A: There was considerable research in writing this novel. I read a lot of nonfiction regarding human trafficking and how it has developed in a matter of a few years into a billion-dollar industry. It is modern-day slavery.

Because the novel is multicultural, sensitivity readers were used in the process, ensuring authenticity to the characters represented in the novel.

A: I sincerely hope this novel creates empathy and awareness for victims of human trafficking. There are other topics I cover in the novel, such as racism and ageism.

Again, as an author, my goal is to make a reader think and feel. It is not my place to tell the reader what their opinion should be, but rather present situations that may offer a different perspective or point of view.

A: I am researching a novel set in South Texas prior to WWII.

A: Follow me on social media! The sweet spot for me is connecting with readers. Thank you for your kind support. Hannah and Ariela launched nationally on Aug. 1, 2022. It is available at your favorite bookstore and Amazon.