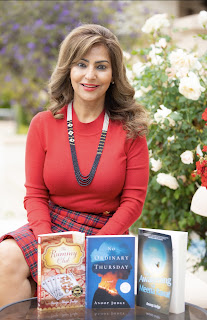 Anoop Judge is the author of the new novel No Ordinary Thursday. Her other books include The Rummy Club. She also has worked as a litigator and TV presenter. She lives in California.

Q: What inspired you to write No Ordinary Thursday?

A: I was inspired to write No Ordinary Thursday when I saw how shocked the women in my community were at the age difference between actors Priyanka Chopra and Nick Jonas when the couple decided to get married.

At parties, the gossip was nasty to the point of meanness, about PC (whom all of the Indian community considers one of their own, and therefore, fair game) marrying a child groom.

I couldn’t understand where this vitriol was coming from until I probed further and found that many of my friends in their 50s, with marriageable kids of their own, feared that the same scenario would play out in their own well-appointed drawing rooms.

So, that got me thinking about how a mother would feel if her one and only very eligible son brought home a girl 12 years older than him, a girl who was her best friend’s daughter, and how it would impact the friendships she had with other her best friend and other women.

I decided to merge this with a real-life story I had read about in the East Coast magazine India-West, regarding a young man in New York City who had left his colleague to die in a burning car because he was driving drunk. When I put the older girlfriend and the drunk driver in the same household, I had a dysfunctional family, and a story to tell.

Q: How would you describe the relationships between your character Leena and her family members?

A: The relationships between Leena and her family members have been fraught with tension, because of the divorce that tore apart their family, and the unresolved traumas of the past. When the events of the one supposedly ordinary Thursday lead to a marriage proposal and a fatal car accident, this already broken family is sent into freefall.

At that juncture, Leena is left to question her priorities: family against the community and even friends, and what steps it might take to reconnect with her estranged children, while Maya‘s growing friendship with a middle-aged neighbor helps her more truly understand her mother‘s motivations.

At the same time, in prison, Sameer attempts to resurrect his life and stop history from repeating itself.

Finally, just as Leena is beginning to mend the bridges with her children, another dramatic Thursday sees prison violence and the deadliest California wildfire that threatens to keep the Sharma family apart forever.

A: The book was originally called No Ordinary Friday because I had Veer proposing to his girlfriend, Maya, who is 12 years older than him, on a Friday evening when the work week in San Francisco typically ends. This is the same night that Sameer has an accident and leaves his colleague to die in a burning car.

However, an important action beat in the book is the time when pregnant Maya and her fiancé flee San Francisco and the judgment of a society that they were born into but never chose, for the small town of Paradise, without telling family or friends where they have gone. 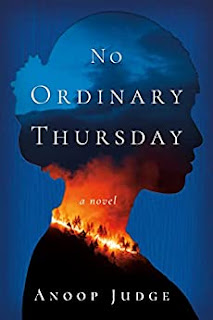 When I began researching California's 2018 Camp Fire, which remains a record-breaking wildfire, I realized that the fire originated on a Thursday and so to tie in the Paradise City fire angle to the night of the proposal and the night of the accident, I changed the title of the book to No Ordinary Thursday, and luckily for me, my editors at Lake Union Publishing loved it.

A: I knew that Leena would reconcile with her family at the end of the novel, and Sameer would need to lose something of his own to highlight the destructive consequences of drunk driving, But there were changes along the way I made that were not expected.

For instance, in earlier drafts, there were six POVs in total, with Kookie, Maya's septuagenarian Aunty, having a POV of her own, and her chapters were replete with idioms and Indianisms unique to India.

However, in discussing this with my agent, Jessica Faust, we decided to lose her POV chapters, because while the chapters were extremely funny, they didn't push the story forward or drive the character development.

I believe this decision streamlined the forward momentum of the novel, and we were still able to give Kookie a pivotal role in the story, as seen through the eye of other characters.

Another example is that in a previous draft, I had Ruchi's (Sameer's colleague who dies in the burning car) younger sister in the Epilogue working as an intern in Sameer's cooking school.

However, my editor felt that this was just too coincidental and we removed that, and I believe that it makes for a stronger ending because as much as I would like for things to be tied up in a pretty bow, life is messy and complicated and an author's job is to portray it as such.

A: Right now I am working on the edits to my fourth novel, which is the story of second chances, and the complexities of an interfaith romance in Hindu-majority modern India, with the narratives and protagonist stories playing out against the backdrop of big, fat Indian weddings.

A cross between the Amazon TV series Made in Heaven and Sejal Badani's A Storyteller’s Secret, the novel explores the lasting impact of families fractured and repaired.

Here is a teaser:

Sonia Shah is the queen of the Bay Area wedding scene—catering primarily to its close-knit Indian community. It is even said that brides arrange their weddings around Sonia's availability to organize their big day. But Sonia has a secret, one that could destroy her business and her carefully-constructed new life in one foul stroke. Gia is Sonia's latest intern, an orphan girl from India who has been given the opportunity of a lifetime to work in her perfect job and lead an existence that she could only have dreamed of back at the orphanage. But in a quest for the truth about her past that will land shockingly close to Gia's present-day situation, what is uncovered is a tragedy of lives ruined by religious hatred in India, that threatens to derail Gia's new life and even her relationship with the man she has fallen in love with.

A: The latest statistics as reported in a New York Times article state that just 11 percent of books published in 2018 were written by people of color. To be agented after eight years of querying, and for No Ordinary Thursday to be published by a major publisher is not a blessing I take for granted.

To all the readers out there who are interested in reading diverse stories, and learning more about the rich culture of their neighbors, I say THANK YOU from the bottom of my heart.