Marie Marquardt is the author of the new young adult novel The Radius of Us, which focuses on two teenagers, one of whom is undocumented. Her other books include the YA novel Dream Things True. She is a scholar in residence at Emory University's Candler School of Theology, and is the co-chair of El Refugio, a nonprofit that works with immigrants. She lives in Decatur, Georgia.

Q: You've worked with immigrants for many years--how did you come up with the idea for this particular story and what do you think readers might take away from it given the current political climate surrounding immigration?

A: For six years, I have worked with an incredible group of volunteers to run a Georgia non-profit that works with immigrants and asylum-seekers in detention.

I often visit with young Central American asylum seekers who have fled some of the most dangerous communities in the world, and who are detained in prison-like conditions while they away their asylum hearings immigration court.

These young people are incredible, resilient, and brave. Their stories are so important and compelling. Not many people know what’s happening to make these teens seek protection in the U.S., or what life is like for them when they arrive. I hope this story will give readers some insight into that, while also giving them a great love story.

The political climate surrounding immigration right now is incredibly tense and extreme, and I think that many of the actions being taken by our administration are fed by fear and misunderstanding.

I hope that The Radius of Us will give readers a chance to see the issues they are hearing about in the media through another lens. I think that one of the great powers of fiction is that it gives us a chance to experience empathy, to get a feel for what it might be like to live in completely different circumstances than our own. 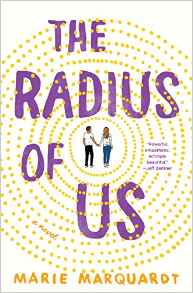 If we can develop empathy, if we can dwell for a while in the stories and experiences of immigrants and asylum-seekers, then we'll begin to ask better questions about immigration policy, and to seek more realistic and humane answers together.

Q: In the book, you write alternating chapters from the perspectives of Phoenix and Gretchen. Did you write the chapters in the order in which they appear, or did you focus more on one character initially?

A: I did write the chapters in order. This was a challenge, since I had to be sure to shift the voice in each chapter as I moved through the story.

I decided to write in this way because I wanted to be sure that the novel’s plot was fast-paced, and that each scene propelled the reader into the next one. For me, this would be hard to do if I were skipping past scenes and then coming back to them. 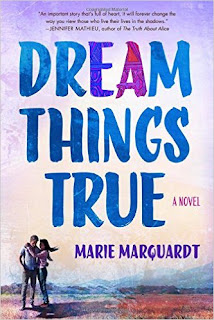 Q: What do you see looking ahead for people facing situations similar to that of Phoenix and his brother?

A: This is a hard question for me to answer right now — mostly emotionally hard. It’s clear that the United States is moving in a direction of closing our borders, of turning more people away who are seeking asylum in this country.

I am utterly heartbroken by this - for my many friends who are coming to the U.S. to seek protection, and who are so anxious to live and work here, to contribute to the life of this nation. I am also heartbroken for our country because we are moving so far from our most fundamental ideals and values.

Like many Americans, I can be critical of our country, focusing on what’s wrong rather than what’s right about it. But over almost two decades, I have been working with immigrants, refugees, and asylum-seekers who have shown me a different way to see this nation.

They made hard journeys here because they believed the United States is a place of refuge, a peaceful nation guided by such enduring values as fairness, equality, and the rule of law. Even in the face of clear injustices – blatant discrimination, inconsistent treatment in the courts – they have astounded me with their steadfast desire to participate in American life, to become American.

When the president’s first wave of immigration executive orders came out, I was struck by a strange thought. I realized that my immigrant and refugee friends are the people who have taught me to love this nation. They have shown me what’s best about it.

So it makes me a little angry when I hear that immigrants don’t share American values, or that they don’t want to become American. That’s just plain wrong.

A: Another love story, of course! And, of course, it also foregrounds immigration themes. The story is set inside the very contentious issue of access to healthcare for immigrants. Really, though, it’s a story about how healing it can be when we let ourselves be vulnerable, open ourselves to other people, and share each other’s burdens.