Bren McClain is the author of the new novel One Good Mama Bone. She has worked in media relations, radio, and television news. She is a communications confidence coach, and she was born and raised in Anderson, S.C.

Q: How did you come up with the idea for One Good Mama Bone?

A: Let’s go back to a hot summer’s night in 1994 in Atlanta, Georgia, when a neighbor called me over to his porch to tell me about a secret he’d been carrying around since he was 6 years old. He had turned 60 that day.

He proceeded to tell me about a night in Alabama when his mother woke him from sleep and summoned him to the kitchen, where he was made to witness an atrocity. He said he was telling me, knowing, “You’re a writer.” I carried that story around with me for years and then wrote a novel around it. A failed novel.

Then, in 2007, I was visiting my father’s farm in Anderson, S.C., only to be awakened in the night by sounds that drew me outside to a gathering of mama cows, huddled in the corner of a barbed wire fence.

I would come to know that their babies had been weaned from them the afternoon before. These mamas were calling for them, deep guttural calls, which seeped into my bones and made me think of my failed novel, what I had hoped to be a celebration of motherhood, but I had not pulled that off.

There, in front of me, with these mama cows, lay the missing piece. The mama cow in the center had her eyes cut hard at me. I told her I could not bring her baby back, but I could tell her story, about the way she and the other cows love their babies.

In fact, I made her that promise and named her Mama Red. I threw out 90 percent of the original novel and started completely over, making Mama Red as the change agent for my main character, Sarah Creamer. 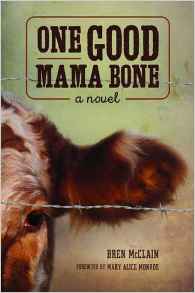 Q: What do you think the book says about motherhood?

A: From page 70 in my novel…featuring my main character, Sarah Creamer, a woman who feels woefully inadequate as a mother, and Emerson Bridge, Sarah’s husband’s illegitimate child that she is left to take care of.

"She pulled the bedspread up over him and got on her knees and called up in her mind the mother cow, how she had moved her mouth along the top of her calf’s back. She was saying, I love you, boy. She didn’t have to say, And I hope you know I want you. The calf already knew that. His mother had come for him."

Come for him. Sarah learns that mothers come for their children, go the distance, break through barriers. But, for Sarah, it’s not that simple, because doing so means a gut-wrenching decision.

Feeling inadequate as mothers is a feeling I am finding common among women I’ve talked to. I can’t tell the number of mothers who have told me, most of them whispering, “I felt just like Sarah.”

Q: And what do you think the book says about the lessons humans can learn from animals?

A: I think it says we have much to learn, and those things are elemental, things we know in our bones. But, first, we humans must be open to such learning, and I think that comes from valuing animals, seeing them as God’s special creatures, just as we humans are.

A: I had no idea the specifics of how it would end, but I knew in my gut that the story was Sarah Creamer’s journey to her “mama bone.” That’s what kept me going all the years it took – for that moment when she claimed it fully. That was worth every hour of butt glue I invested.

But there’s also a second ending, and this one involves the antagonist’s family, the Dobbins. I had no idea how this would end, and I was about halfway through writing the book when I saw in my mind what would happen.

A: A novel I am calling Took, which I am over-the-moon excited about it. Honestly, I didn’t know if I could fall in love with characters as deeply as I did with the ones in One Good Mama Bone.  But I did – and it was an easy love.

The novel is inspired by the real life Eula Bates, a woman who held a shotgun on a bulldozer that tried to come through her farm to build a road into the Savannah River Hydrogen Bomb Plant in 1951. The cops came and hauled her off to the S.C. Insane Asylum and kept her for 16 years.

Eula’s story is the prism through which I am telling the whole story. Eula’s story, in real life, didn’t turn out so well. This is why I’m writing it as a novel, to give Eula something good.

I love to approach material from a journalist’s perspective, so I conducted interviews with more than 30 people who were thrown off their land in South Carolina when the Savannah River Plant came in 1950. Six thousand people in seven small farming communities.

I had no idea what to do with the information, so I put it away for five years and wrote One Good Mama Bone. When I was ready to return to the material, I thought about reading through notebook after notebook of research, but my gut told me to just get quiet and see what information had stayed with me.

I knew immediately. It was Eula Bates, her story.

It feels like it has wings already. Took was just named the gold medal winner of the William Faulkner – William Wisdom award for Novel-in-Progress.

A: I’m a 27-year-overnight success. One Good Mama Bone is actually the third novel I’ve written (the other two in the proverbial drawer). I can see a theme running throughout all three books – and that is what I call the loading up of children.

By that I mean, the stuff parents load onto their children, their own undone, unfulfilled stuff – most of which is damaging. Luther Dobbins and his dream of continuing to be a bigshot, when inside him, he feels unworthy. Sarah’s mother, Teeniebelle, and her feelings about motherhood. What fuels me as a writer, is to try my best to free the child from this loading.