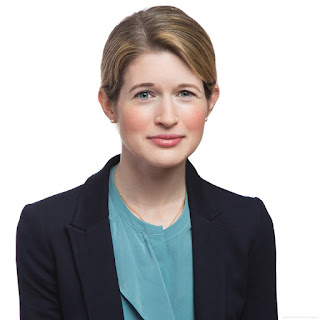 Katherine Zoepf is the author of the book Excellent Daughters: The Secret Lives of Young Women Who Are Transforming the Arab World. She is a fellow at New America, and her work has appeared in a variety of publications, including The New York Observer and The Chronicle of Higher Education. She is based in New York.

Q: You write, “Like a generation of young Americans, my interest in the Arab world was substantially shaped by the September 11th attacks.” How did you end up spending so much time in the Middle East after that, and focusing particularly on the region’s women?

A: I had been someone before that who followed the news pretty keenly but I wouldn’t say I had a particular regional interest. I was right out of college and was curious about a lot of things.

At the time of the Sept. 11 attacks, I had just moved to New York and one of my classmates was killed, and suddenly I became a little obsessed with getting to the region and learning as much as I could. I’ve always been someone who understands things better when I can try to go to the place and see how the world looks from there…

Q: And the focus on women?

A: That came a little bit later. It was a natural interest. I went initially to the region as a news reporter. I was just doing ordinary…Middle East coverage from Syria and Lebanon.

I came to feel in the aggregate the Middle East reporting Americans were getting didn’t convey an overall picture of the region that felt very true to me.

I would go home to the States every few months—my friends and family were reading things [I and others were writing] and the questions they were asking, don’t you think people are brainwashed?

I realized that looking at the Middle East from afar, there was a picture of a homogeneously violent and repressive place. Even in an active war, there’s a lot of ordinary life and social change that takes place. Wars don’t completely obliterate that. Much of the region was living in peace.

I wanted to take a step back and tell some of the more intimate stories, how people made decisions. That was the impulse for the book.

I also, when it comes to women, think reporting on the region tends to focus too much on rebels and activists—there’s nothing a reporter loves more than someone speaking truth to power. But the norm, a lot of activists you see quoted most frequently in the Western press are better known to Western newspaper readers than they are in their own country.

Most women [I met] are not activists, they’re just ordinary women. They saw themselves as good daughters, wives, part of their community. Nevertheless, they’re working for change in small ways—you look at how social change takes place.

Q: In the book, you report from five countries, Syria, Lebanon, Egypt, Saudi Arabia, and the United Arab Emirates. What are some of the similarities and differences you found among those countries when it came to the role of women?

A: I tried to differentiate between the countries pretty clearly in the way the chapters are organized. I tried to give background in each case. The countries I included in the book are predominately Muslim. 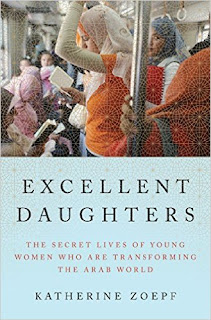 In all of them there are some form of guardianship laws. In Saudi Arabia they are quite extreme; even in those liberal countries you need permission as a woman to travel. [You’re] a bit less than a full citizen even if it’s only in regard to travel in the case of the more liberal countries.

The differences are pretty big—these are all countries were they tend to have pretty conservative values…In Syria and Iraq the Baathist ideology values full female participation in society. In Egypt under Mubarak in some ways women’s laws protected women, who suffered after the fall of Mubarak.

It is understood by many governments in the region that women’s views are important in Western countries, and it’s used as a political tool—say, Look, we are making changes, to impress human rights observers and Western governments. I think that’s very much seen by the people locally.

It’s easy to get a sense that women are pretty passive…on the eve of the Iraq War [people were] talking about liberating Iraqi’s women with no sense that Iraq was one of the most progressive countries in the region with regard to women, and no sense that women were part of society and actively believe in supporting many of the rules under which they live.

We accept that American women can have a diversity of political opinions; conservative American women can be pro-life or favor laws that don’t give women paid maternity leave. I could say, That doesn’t make sense, she must be brainwashed. We don’t take that leap. I wanted to write a character-narrative-driven work that would [express their] diversity and struggles.

Q: Have you been back to Syria recently, and how has the current situation affected some of the people you met there?

A: It’s very, very sad. I have young children now, and I would not go to Syria as it is now. I’m still in touch with many of my friends and people I worked with there. The people I’m closest to are living outside the country now. The more well-off ones are in Dubai or Paris and the less well-off ones are in Turkey and Lebanon.

The one good friend, actually two that are still there—both were journalists and they’re there for work—the man sent his family out for their safety. It’s a very sad situation.

Q: We’ve discussed this a little bit already, but is there more you would like to say about what you see as the most common perceptions and misperceptions about women in the region?

A: The point in general I hoped I would make with the book was to show the complexity and diversity of opinion and practice. I also wanted to show how different political systems and cultures create different kinds of people.

I am often asked, especially when speaking to young people, why don’t Saudi women just rise up? You have to take a step back and imagine yourself in the position of a woman who has grown up in that society--a 15-year-old girl doing well in school who wants to attend university and her family is not supportive.

There’s no way you can emancipate yourself at 18, get a scholarship, live independently. Your opportunities depend on the kind of person your father or guardian is and your relationship with him.

Maybe start wearing niqab, memorize the Koran, convince your family sincerely [that you are] a really good daughter and convince your father you’re someone he can trust, and you’re very modest and you’re going to leave the house to go to college and come right back—I saw lots of women doing this.

There’s a lot of misperception of men in the Middle East—the rules [can be] seen as love—my father wants to protect me and my reputation. Most parents love their children and want what’s best for them.

Saudi women by and large aren’t agitating for new rights. They think, My father allows me to travel and study. They see it as care.

We…have such strong traditions of individual rights here—adolescent rebellion is natural. It is natural in a society where [adults] vote and express opinions…We imagine it’s our character—we are able to start businesses, take risks.

We don’t understand that we take risks in a context where there’s no real personal risk attached. In a society where individual rights and freedom aren’t protected, you have to operate very differently. Everything depends on your relationship with your family. Most people try to work within that.

Activists in the most conservative societies—most of them had something go quite wrong in their lives—a divorce, a moment where they saw the system clearly for the first time.

I grew up in the ‘80s and ‘90s. I was told girls can do everything. It wasn’t until I was close to 30 that I felt opportunities were less open to me as a woman. You only see what you see.

A: It depends—it’s very individual. It varies depending on the country and the context. I write about young Saudi women going to work in retail for the first time—it was a story that I thought was probably not such a big deal—a few thousand women, but the sight of women working in the public sphere has made such an impact in these women’s lives.

They were women who really needed [these jobs]—an enormous number were divorcees or widows and they needed to support themselves. The impact on them was tremendous.

I heard again and again, Since my divorce I was returned to my parents’ house and haven’t seen my children in years. My family of birth makes it clear I’m a burden.

Suddenly they’re meeting women like themselves for the first time. They had never met another divorced woman. Suddenly they’re trading information, finding out out it’s possible to hire a lawyer and ask for access to their children.

When they called their ex-husband he knew they had a job and could afford to hire a lawyer, and they had a whole new status in their family. Younger women were coming to them [asking questions]. There was a lot of pride and a sense of accomplishment even though their salaries were much lower than men’s…

My reporting taught me to be a big believer in small changes and ways a bit more education and career opportunities, how things in aggregate, can change society pretty rapidly.

Now it is the fourth year women have held these jobs, and no one shouts at them in stores anymore, people are used to it. It’s the same way in the U.S.; over the course of a generation gay rights are widely accepted. It’s just knowing that person, liking them, you feel it’s something normal.

In the end, although the Arab Spring has been a step backward for women in certain ways, overall the trend line is good. Educational opportunities and work opportunities are not going to stop.