Stephen L. Moore is the author of the new book Texas Rising: The Epic True Story of the Lone Star Republic and the Rise of the Texas Rangers, 1836-1846. The book is a companion to the History Channel miniseries. Moore's other books include Eighteen Minutes and Pacific Payback. He lives in Lantana, Texas.

Q: How did the idea for this book come about, and how closely did you work with the History Channel on their companion miniseries?

A: History Channel's publishers, William Morrow/Harper Collins of New York, contacted me last summer. One of their senior editors had seen my previous books on the Texas Rangers and the San Jacinto campaign and felt that I was a good fit to write the non-fiction companion book for their new Texas Rising series. I was very interested.

Most of their filming work was complete, but I signed NDAs in order to review the complete script for the series. I was therefore able to write about the key elements contained in Texas Rising and also offer a broader view of the Texas Revolution and the events leading up to it. The production team at History/A&E reviewed and approved my writing as a solid, fact-based companion for their entertaining mini-series.

Q: What do you think are some of the most common perceptions and misperceptions about Texas history, particularly the period on which you focus in this book?

A: People probably think Texans were more well equipped and suited to handle the challenges that would confront them in the Texas Revolution than they were.

Truth be told, there were few trained soldiers who fought for the Texan cause. They were farmers, lawyers, merchants, preachers, businessmen, and teenagers, many of whom had lost loved ones at the Alamo or at Goliad. 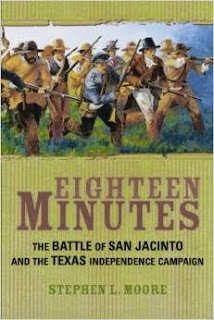 In Texas Rising, I also relate the evolution of the fabled Texas Rangers and how they came to play a critical role for the Texas Army during the Texas Revolution.

Another perception is that General Sam Houston was cowardly retreating all the way toward the United States throughout the San Jacinto campaign.

In fact, he had intelligence from the Texas Secretary of State that he might be able to rendezvous with U.S. troops to support his cause. In the end, he received intelligence that led him to the plains of San Jacinto, where he was able to achieve one of the most startling and decisive victories of American history against a numerically superior foe.

Q: Your ancestors were 19th century Texas Rangers. Were you always interested in family history, and did you hear many stories about your great-great-grandfathers when you were growing up? 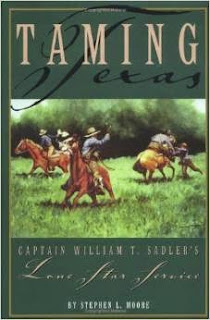 A: I heard many stories from my grandmother, Evaline Kolb, about her grandfather, Captain William Turner Sadler. She and her cousin, former Texas Land Commissioner Jerry Sadler, told me all about Captain Sadler when I was in seventh grade. I compiled a short biography about Sadler and many years later turned it into a full-length published biography.

One of my Moore ancestors also married a Cherokee woman, giving me bloodlines on both sides of the battlefields of the 1830s. So, I've always held a deep interest in Texas history.

Finding out more about my ancestors who served in the 1830s Rangers companies compelled me to research and write the Savage Frontier series about the Texas Rangers and the Texas Indian Wars.

Q: What are the legacies today of the events in Texas during the period you cover?

A: People today should remember the Texas Revolution as being a rebellion against a tyrant. The people who fought for Texas included not just Caucasians, but people born in Europe, freed blacks, and dozens of Tejanos--people of Mexican birth who were loyal to the Texas cause. Just like in the American Revolution, oppressed people have a tendency to rise up against those who are unjust.

A: My next book is due out in November from NAL Caliber/Penguin Books. It's called The Battle for Hell's Island, and it covers U.S. Navy dive bomber pilots in the carrier wars of 1942. The main thrust of the book is a small group of aviators who came to fly with the Cactus Air Force on Guadalcanal to help defeat the Japanese Navy during the height of that campaign.

A: My prequel to Hell's Island was a book published by NAL last year called Pacific Payback. It tells of the incredible victory achieved by the U.S. Navy at the Battle of Midway, and it is being reprinted in paperback for the first time in early June 2015.