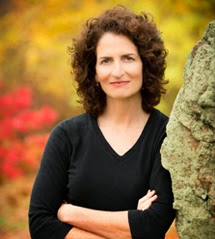 Charlotte Gordon is the author of the new book Romantic Outlaws: The Extraordinary Lives of Mary Wollstonecraft and Her Daughter, Mary Shelley. Her other books include Mistress Bradstreet and The Woman Who Named God. She is an associate professor of English at Endicott College, and she lives in Gloucester, Massachusetts.

Q: Why did you decide to write a joint biography of Mary Wollstonecraft and her daughter Mary Shelley?

A: I only recently learned to call it a joint biography--I thought of it as one story. I knew of Mary Wollstonecraft and Mary Shelley; I never registered that they were mother and daughter. Then, I [thought,] Of course, this cool woman gave birth to Mary Shelley! I saw she died 10 days afterwards. [Mary Shelley] kept Wollstonecraft’s torch alive.

I didn’t understand why Wollstonecraft was an introduction to Shelley’s biographies and Shelley was just an epilogue [in Wollstonecraft’s]—it felt like a continuous story. Looking back, I realize this was a large insight; I brought fresh eyes to the field.

At no point do I think they were the same person [but] I do adhere to the contention that Mary Shelley wanted to live by her mother’s philosophy.

Q: You write, “How could a mother who died ten days after she gave birth have had such an inordinate impact on her daughter?” Why did Mary Wollstonecraft have such an impact on Mary Shelley, and what was that impact?

A: To begin with, Mary Shelley was raised to believe in her mother as an iconic person—[there was] her dad’s adoration of her mother, going to the gravestone every day…Also, Shelley was a reader. If Wollstonecraft hadn’t been so prolific—her mother left behind all these words, and [she] read them over and over… 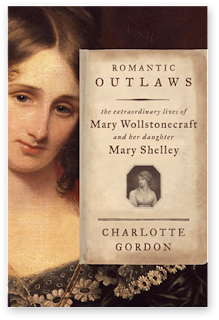 Q: What do you see as the main ways in which Mary Wollstonecraft influenced her daughter?

A: Wollstonecraft’s impatience with conventions, her emphasis on courage, on standing up for what you believe in…that women have brains and that there should be a deep-rooted sense of women’s education.

I don’t think Mary Godwin would run away with Percy Shelley [without Wollstonecraft as a mother. Mary Shelley's] novels after Frankenstein are exploring dimensions of proto-feminism, exploring the fate of young women in the world.

One of my favorite things is Mary Shelley’s nonfiction—she wrote for [an early] encyclopedia, and she was the only woman. She was more learned than most of the men. She proposed doing an encyclopedia of great women, and the guy scoffed. She embedded the lives of women in the men. The embedded narrative interests me. In the Montaigne entry, she does an exegesis on his niece, Marie.

Q: So she slipped the information in.

A: That’s one of the huge differences from Wollstonecraft. Shelley was such a skillful infiltrator. She lived in dangerous times. 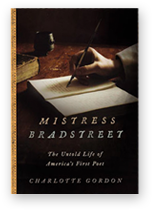 Q: How would you describe the differences in the times the two women lived in?

A: Wollstonecraft came of age in the optimistic Enlightenment. There was obvious poverty that outraged Wollstonecraft, but she was surrounded by Enlightenment figures. [Reading] John Locke—every human being is born with a blank slate. Then to spend her 30s in Paris in the Revolution—it was beyond Haight-Ashbury. I did feel like it was analogous.

Shelley comes of age in the conservative backlash.  She has to learn much more subterfuge. She suffered social exile. Her mother had managed largely to escape [that].

Q: The book goes back and forth between the lives of Wollstonecraft and Shelley. How did you come up with the structure of the book, and did you initially write it in the way it appears in the book?

A: From the very first draft, I wrote it back and forth. It happened very organically. I thought of it as one story. It was Young Mary 1, Young Mary 2—a comparative study throughout in my mind. When I think back, I think, Wow! At some point I looked at each individually. It was very organic, and it had something to do with my abiding interest in women’s history.

Q: What would you say are the legacies today of both writers?

A: Even if people haven’t heard of Wollstonecraft, the fact that we’re speaking on the phone about ideas is one of her legacies. She articulated and demonstrated how capable women intellectuals could be. She was fearless. I’m reverential and grateful to her.

Mary Shelley’s legacy is comparable—assuming people know the true Wollstonecraft and the true Shelley; their legacy was so complicated in the 19th and 20th centuries. When people thought of Wollstonecraft [they thought of] promiscuity…there was a troubling link between feminism and promiscuity that exists today.

For Mary Shelley, though she was called a whore, the Victorians had whitewashed her into the demure wife of Shelley. It took 150 years [for the true picture] to emerge.

Wollstonecraft was depicted as promiscuous, a degrader of young women, Shelley as a devoted Victorian wife. It’s tragic. What we can learn today is that their bravery cost so much; they had to fight for the lives they lived…

A: I’m not making good progress! I’ve lived with these women for so long. I find myself daydreaming about them. I say, “No, no, you’re done!” I really loved them, the whole cast of characters. I immersed myself in them. I went to Italy, London, France.

A: Maybe what I understand now is what’s new about the book is seeing Shelley through the lens of Wollstonecraft. Seeing them as mother and daughter changes how you read both of them.