Mary C. Bounds is the author of the new book A Light Shines in Harlem: New York's First Charter School and the Movement It Led. She lives in Chappaqua, New York.

Q: Why did you decide to write a book about the Sisulu-Walker Charter School?

A: I’ve long been interested in education-related issues, having written about education for various publications, including The New York Times, the Dallas Morning News and others.

I’ve also watched my own children travel through two very different school systems—one a gem of a public school in Atlanta that succeeded despite being part of a troubled, unwieldy urban school system, and the other in a high-achieving, resource-rich suburban school district outside of New York City.
As I watched their educations unfold, I came to believe that there’s no one way to deliver a high-quality education. So when an opportunity arose to write a book about New York’s first charter school, the Sisulu-Walker Charter School, and the early days of the charter movement, I jumped in headfirst.
When I was first approached about writing the book, I thought I’d be writing a simple story about a feisty little school in Harlem. What I quickly realized, though, was that the story was much more complex than what I had initially thought. It’s a story about civil rights and how that played out at Sisulu-Walker and the charter movement.

It’s as one of Sisulu-Walker’s co-founders, Dr. Wyatt Tee Walker, who was Dr. Martin Luther King’s former chief of staff, has long said: Equal educational opportunity for all children “is the civil rights issue of the 21st century.”

That was a story I wanted to tell. At the same time, I was intrigued about how an icon of the civil rights movement like Dr. Walker, a Wall Street star and inner-city families, many of whom had spent their entire lives in Harlem, put whatever differences they might have had aside to create something larger than themselves.

Like most people, I didn’t know a lot about charter schools when I first began writing the book, but I wanted to know more. I wanted to look at education reform through a broader lens and examine the most important issues facing them, and I wanted to learn what the most recent research was telling us about them.

I also sensed that there were lessons that could be learned about why the Sisulu-Walker school survived when New York’s other two inaugural charter schools failed.

But mostly, I wanted to know: What is it about charter schools that would attract more than two million students today? 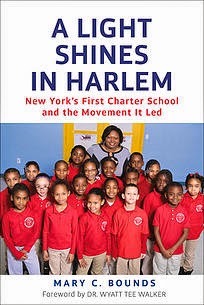 Q: What were the key factors that came together to create the school, and how was it initially received?

A: In the summer of 1999, barely six months after passing a charter school law, New York State awarded its first three charters. Those three schools, including Sisulu-Walker, had just 12 weeks to open, and the obstacles they faced were daunting.

Sisulu-Walker had no teachers, no staff, no books. It didn’t even have students. Making matters even more difficult, it would have to operate with less money than traditional public schools.

What it had, though, was an improbable mix of people who were determined to break the cycle of failing schools that had existed in places like Harlem for generations.
One of them, Steve Klinsky, had recently walked away from a high-powered Wall Street job, in part, to launch a charter school. Meanwhile, Dr. Walker’s church had just finished building a magnificent building that it was still figuring out how to use. A handful of teachers, too, were intrigued by the idea of teaching at a charter school.

Most remarkably, though, inner-city families took amazing leaps of faith and signed up their children for this new kind of school that was short on promises, but long on hope. Many of them had gone to failing schools themselves in inner-city neighborhoods that a recent study had labeled educational “dead zones.” They weren’t necessarily focused on the theoretical discussions swirling around education reform back then. They simply wanted something better for their children.
Equally passionate, though, were the forces lined up against charter schools. The state’s charter law was controversial, and some harbored hopes that they would become just another flawed educational trend that failed. Opponents threatened lawsuits. Traditional schools all too often viewed them as unwelcome competition. If the early charter schools failed, many believed, the state’s entire movement would’ve gone down with them.

Q: “This book seeks to tell the history of one notable charter school as a way of telling the broader story of all of these schools.” What are some of the ways in which it tells that broader story, and how does it stand out?

A: The nation’s charter movement has been around for more than two decades now, and studies—particularly those in cities like New York City and New Orleans where charter schools are ubiquitous—are increasingly showing that charter schools outperform traditional public schools.

Yet all these years later, the nation’s charter movement still faces some of the same hurdles that made it difficult for Sisulu-Walker to succeed—unequal school funding, no money for school buildings, political opposition and a misunderstanding about what charter schools really are.
As the Sisulu-Walker story shows, schools are never easy to open. But what makes the Sisulu-Walker school stand out is how it was able to overcome those hurdles, thanks in large part to the flexibility that charter schools have.

When problems arose after the school expanded to two buildings, its leaders quickly scaled back to one unified location. When its curriculum met resistance from some teachers, they changed it. When they needed to make personnel changes, they could.

At times early on, it looked like the school might not make it. It did, though, because, as happens every day at schools across the country, a disparate community of people was determined to do right by the kids, and they persevered.

Q: Do you see the role of teachers at charter schools as being fairly similar to that of their counterparts in traditional public schools?
A: I do. Teacher quality and staff development are the keys to any school’s success and outstanding teaching is outstanding teaching no matter where and how it takes place.

During Sisulu-Walker’s early years, one of Sisulu’s classrooms was filled with the so-called “bad,” hard-to-control kids whose academic work was weak. Next door were the so-called “good” kids, achieving at high levels.

After a while, school leaders swapped the two teachers and soon the classroom with the “bad” kids had become the well-behaved, high-performing class. Discipline and test scores in the formerly high-performing classroom declined. “If you want to predict results, don’t tell me the names of the kids,” Klinsky concluded. “Tell me the name of the teacher.”

A: Right now, I’m working on promoting A Light Shines in traditional ways, and I’m working on tapping into new audiences through social media. I hope, though, to write another book in the near future. There’s the adage that writers should write about what they know, so I wouldn’t be surprised if my next book is education-related.

I’m always surprised by how many people still don’t realize that charter schools are public schools. Their leaders are given more flexibility in creating and running their schools, but they are still required to deliver the educational results they promise when they were awarded their charters.

A Light Shines in Harlem has been favorably reviewed in a diverse range of publications and online sites, including The New York Times, the Harvard Kennedy School’s Education Next journal, the Center for Education Reform, the Manhattan Institute, the Journal of Blacks in Higher Education, Scholastic Administrator magazine, and others.

It has also been listed on numerous must-read lists, including those of Publishers Weekly, the Harvard Kennedy School’s Education Next journal, Real Clear Education, the Center for Education Reform, DropOut Nation, and others.

To read some of those reviews and learn more about the book, visit www.alightshinesinharlem.com and the book’s Facebook page. Or go to Twitter @lightinharlem.