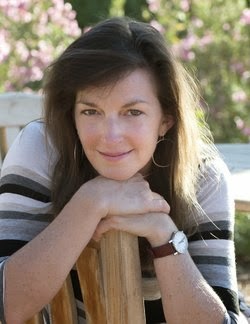 Karen Deans is the author of the new children's book Swing Sisters: The Story of the International Sweethearts of Rhythm. She has written another book for young readers, Playing to Win: The Story of Althea Gibson. Also an illustrator and painter, she lives in the Washington, D.C., area.

Q: How did you come to write about the International Sweethearts of Rhythm?

A: A funny thing happened on the way to… a children’s book conference at Hofstra University. My book Playing to Win had just come out, and I was on a train passing through Forest Hills, where Althea Gibson had competed in what is now known as the US Open Tennis Championships.

I was in conversation with the woman sitting next to me, Rita Gray, who is also a children’s book writer. I shared my interest in writing about women in history and she told me the remarkable story of the International Sweethearts of Rhythm, which totally captured my imagination.

I went back to New York and pitched the idea to my then-editor, Mary Cash, who thought it had great potential. Next I called my dad, who was a jazz pianist, to see if he knew anything about them. He happened to own a record album of their music, as well as a book that featured their story.

During my research, I was inspired by the Sweethearts’ determination, despite the challenges they faced dealing with racism and sexism, as well as their ability to transcend discrimination through friendship and music. 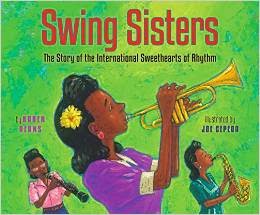 Q: You're an artist as well as an author. How do the two skills complement each other in your work?

A: Since I was a child, I have always loved to draw and write. It’s funny how some things never change. I started my writing career as a journalist, while also working on a novel. I tried to get the novel published, but after many failed attempts and lots of frustration, I put it on a shelf.

I needed a break from writing, so I turned to painting as a fun distraction. Before long, I was getting hired to illustrate educational curricula and also paint murals. And yes, I was getting paid to do it!

Sometimes doors open and it would be foolish not to walk on through. That’s when I thought, “Oh, I guess I’m not a writer, after all. I’m a painter!” But the desire to write never left me. I have always kept journals. And I had acquired quite a large collection of picture books—out of sheer appreciation for the art form—with no intention of ever writing one.

And then, one day I discovered an important story (Althea Gibson’s life) had yet to be written for children, and I became a writer again. At around that same time I started my art business, Wooden Tile. So I’m still painting for the business, as well as painting sets for a local children’s theater.

Q: Can you tell us more about how you chose Althea Gibson as the subject of one of your books?

A: I was a big tennis player as a kid growing up in Atlanta, Georgia. My father was my coach, and he was also very involved in the tennis community there. In the 1950s he had seen Althea Gibson play at Forest Hills and told me stories about it, so I was aware of her from a very early age.

Fast forward many years, to when my youngest daughter Maisy—now in her first year of college— was a first grader. We went to the library for biographies, because she was a biography hound at the time. 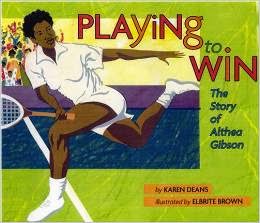 She happened upon a book about the tennis player Arthur Ashe and, since I was a tennis player, suggested we check it out. At that moment, my girl power antenna went up, and I went to look for a book about Althea Gibson, the very first African American to win a national tennis championship. Many people wrongly think it was Arthur Ashe. This mistake is partly due to the fact that she was a woman and has often been overlooked.

Well, as suspected, we found no book about Althea on the shelf. And after some research, I discovered that no book about her for young children existed. So I set about writing one.

Q: Can you say more about why you decided to write for children, and who are some of your own favorite children's book authors?

A: Writing for children has parallels to writing poetry. Not that I’m much of a poetry writer, mind you, but you have to get to the essence and you have to touch the heart and mind fairly quickly or else you will lose your audience, whatever the age.

Children are intuitive. They need to be moved emotionally and their patience is limited. So, keep it concise, and make it matter. I find this challenge to be a real motivator, as well as a simple guideline for thinking, writing and even painting.

Plus, I just love the playfulness of writing for children. It’s wide open. Like painting sets for children’s theater, where I am constantly delighted by the endless creativity and playfulness that is allowed. It’s good to keep in touch with that part of ourselves and share it with the world whenever we can.

Favorite authors? Such a difficult question! I loved Judy Blume growing up. Ludwig Bemelmans. Beverly Cleary. Currently I am really into graphic novels/memoirs, such as This One Summer by Jillian and Mariko Tamaki or Relish by Lucy Knisley. Talk about the power of pictures and words!

A: Both writing and illustrating my own picture book. I am hard at work developing story ideas that continue to mine the rich field of women in history.

The challenge of creating a visual world that complements the written word is a satisfying left brain/right brain experience. A fulsome experience, like creating theater, which I have been a part of, too.

And, not surprisingly, picture books—especially when read aloud—are like theater. They create a dramatic world to get lost in, and I love getting lost in this way. It’s something I live for!

A: I always stress to kids how important it is to make time to write. And draw or paint, if you have a mind to. Keeping a journal or sketchbook handy and adding to it everyday is a really good idea and a fairly simple practice. Nothing fancy.

Look at the world around you. Listen to what people say. Remember things that attract your attention. Take notes, otherwise you might forget your experiences. These ideas add up and always tell stories about who you are and what matters most to you.

And, this ultimately shapes what we, as creators, bring into the world. We are all creators. And we all have something to bring. So don’t be shy: bring it!