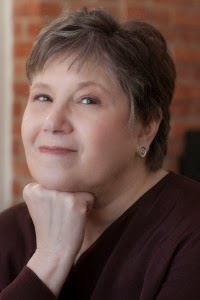 Judith Claire Mitchell is the author of the new novel A Reunion of Ghosts. An English professor at the University of Wisconsin-Madison, she also has written the novel The Last Day of the War. She lives in Madison.

Q: Some of your characters are based on historical figures. Why did you decide to write a fictionalized version of their lives, and what did you see as the right balance of fiction and history in the novel?

A: When I began imagining this novel, I thought I’d be writing a roman à clef about the German-Jewish chemists Fritz and Clara Haber, hewing fairly closely to the actual events of their lives.

For those who don’t know the Habers, he synthesized the first man-made fertilizers, which saved the world from global famine, but also developed the first poison gas used in warfare, while she, sadly, is probably best known for her suicide in 1915, which is generally considered her attempt to protest his chlorine gas work.

But when I sat down to write the book, try as I might, I couldn’t make the Habers come alive on the page. It turned out that the roman à clef with its adherence to the true story was too proscribed a format for me.

I needed the reader to understand why she should be intrigued by a pair of scientists who lived so long ago, and I needed to show how their choices and their work—his especially—continue to impact us today. In short, I needed to look at their story through the eyes of relatively contemporary characters.

That’s when the fictional characters began showing up. There were my three narrators, Lady, Vee, and Delph, who are able to tell the entire story, from past to present. And there are other characters who are complete inventions rather than thinly-disguised historical figures.

Early on in the process I also changed the names of the main characters from Haber to Alter, which was freeing. Eventually the imagined characters outweighed the fact-based story, and I do think that’s the right balance for this novel. 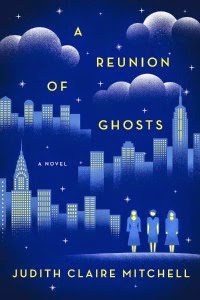 Q: The idea of a family curse is central to the novel. What intrigued you about that, and how did you create your three “cursed” sisters, Lady, Vee, and Delph?

A: Often in fiction you want your characters to be a bit larger than life. For example, I’ve corresponded a bit with a great-granddaughter of Fritz Haber, and she seems to be a kind, thoughtful, and rational person who is curious about her ancestors, yes, but isn’t obsessed with them. This is a good thing. No one wants to live a life that’s fodder for a novel!

But Lady, Vee, and Delph Alter are novel fodder. They were created for the express purpose of propelling the novel along. If I’d written them as three ordinary women with nothing more than a hobbyist’s interest in genealogy, they would not sustain 400 pages of narrative.

Their interest in their lineage had to emerge not from reasonable and rational curiosity, but from a terrible and somewhat irrational sense that they carried an inherited burden of guilt and shame.

The weight of our pasts, how difficult it is to break free: that’s something the book explores. And to write about that weight in a compelling and dramatic way, I needed it to hobble my characters.

A mere genetic proclivity toward depression or even suicidal ideation, possibly treatable by some Zoloft and talk therapy, was not going to do the trick, not if I wanted the novel to be compelling and to address complex and intractable issues. There needed to be something cosmic about the sisters’ burdens.

When I did the math and realized they were the fourth generation of my Alter family, that’s when I remembered the Biblical injunction—the curse!—and that’s when I wrote the first paragraph.

As to how I created Lady, Vee, and Delph, I need to confess that while I’ve been making it sound as if every step of my process is carefully thought-out, a series of realizations and understandings, that’s really just a convenient way of talking about the process.

The more complicated truth is that my intellectual understanding of what I’ve done on the page almost always comes after I’ve done it—sometimes long after. Sometimes I don’t think it through until I’m asked questions like these!

In short, while I’m perfectly aware that I created Lady, Vee, and Delph for the purposes I’ve been describing, I’m not sure at all how I did it. It honestly feels as though they just showed up one day, pushed me out of my chair, sat down at my computer, and took over.

Or to put it another way, I believe that much of my work takes place in my unconscious. While I’m consciously struggling with point of view and doing research and writing bad sentences, my unconscious is doing a lot of the more difficult work.

In the case of Lady, Vee, and Delph, by the time they made their way to my conscious mind, they were pretty much fully formed. My job then was to get them to come to life on the page via the most difficult and important part of writing a novel—the part Hemingway called “getting the words right.” Q: This novel covers more than a century’s worth of history. How did you conduct your research?

A: To steal a joke from the novel, I conducted it the same way a porcupine makes love: slowly and carefully.

Actually, I had little choice in the slowly part. When I first became interested in Fritz and Clara Haber, there was very little information about them out there. This was especially true if you didn’t read German, which I didn’t and don’t.

Over time, though, the world seemed to become as fascinated by the Habers as I was, and eventually there were so many books and articles about them—there were even plays and a movie—that I had to stop the research process or I’d never have gotten around to the novel.

But along the way I read biographies and memoirs, worked with a translator, searched old newspapers, corresponded ever-so-briefly with the aforementioned great-granddaughter of Fritz and Clara Haber, traveled to places that appear in the book, and Googled the hell out of everything.

I had to research the more contemporary sections, too. Sometimes the facts you get wrong are the ones you are positive you remember from childhood.

A: I make many, many, oh so many changes as I write. Because I don’t outline or know where I’m going, I’m always hitting dead ends or getting entangled in contradictions, and then I have to go back to the beginning of the scene or the section or the chapter and start all over. It’s not an ideal way of tackling a large, unwieldy project like the novel, but it’s the way I seem to do it.

For instance, the sisters narrating A Reunion of Ghosts say almost immediately that they’re going to kill themselves on December 31, 1999. But I didn’t know if they’d really go through with it until I got to the part of the book where their final decision had to be made.

There was literally a writing session when I thought, Okay, today’s the day. What happens to the girls? Up until that day, though, I’d considered every permutation under the sun.

But my conscious mind is better at perfecting the sentences and organizing the story and weeding out inconsistencies and making the book readable. And it’s the conscious mind that rereads and revises the entire thing one or two or five hundred times. You need them both. Teamwork.

A: My first novel was about genocide and this novel is about suicide, so in a rather bloody-minded way, I decided the next one will involve homicide. (How’s that for a trilogy!) Like the two books I’ve written so far, I’ll use an actual historical event as a jumping off point.

Of course, this is only a plan. Anything can happen. The biggest mistake in writing a novel, at least in my experience, is thinking you’re the boss of it.

A: I was a writing major in college, but stopped writing fiction upon graduating. When I came back to it I was in my mid-forties. I wound up quitting my job and going off to grad school for an MFA.

It was a scary thing to do. I thought I’d never have health insurance again. But next thing you know, here I am, publishing novels and working as a professor of creative writing. Real dream-come-true stuff.

So, whenever I have the chance, I like to remind people, especially women, who may have back-burnered a few of their goals and dreams along the way, that reinvention is possible.

Yes, you need a few things like drive and talent and the ability to keep going in the face of both criticism and disinterest and also a nest egg doesn’t hurt.

But I hate the way our society dismisses people who’ve reached a certain age. Yogi Berra had it right. It ain’t over til it’s over. And while I’m quoting sports figures, let me throw in some brilliance from Satchel Paige who asked: How old would you be if you didn’t know how old you were?