Tania Malik is the author of the new novel Three Bargains. Born in New Delhi, she grew up in India, Africa, and the Middle East, and now lives in Northern California.

Q: How did you come up with your characters Madan and Avtaar Singh?

A: The idea for Three Bargains came to me 10 years before I sat down to write it. While my story percolated over those years, I realized that there were several stories written about children searching for their birth parents, or mothers searching for their children, but I had yet to come across a story where a father searches for his lost child.

When I began to write the story I felt I had to know who this man is, this father, to know who he is as a young boy, to follow the events in his life as he grows and matures, and to discover the circumstances under which he loses his child. This is how I came to create Madan, whom we meet when he is 12 years old when he arrives in the fictional town of Gorapur, where his father works for Avtaar Singh, the most powerful man in town.

To give Madan the hope and the possibility of a future, he needed what any child needs – someone to acknowledge that he matters, and to show him how to successfully navigate through life. Avtaar Singh instantly recognizes Madan’s intelligence and a connection grows between them that is as close as father and son. Avtaar Singh arranges an education for Madan, providing him a way out of his impoverished background while at the same time bestowing on Madan his questionable moral code. 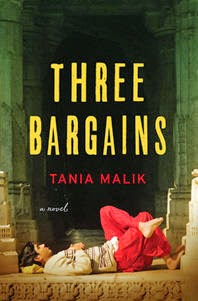 Q: Can you discuss more about the impact of the story's taking place over several decades?

A: To allow for all the events in Madan’s life to unfold in a way that would do justice to his journey from boy to man, I felt that the story would have to encompass most of Madan’s life. I wanted the reader to understand Madan as a child, to experience intimately the world he comes from, and what he makes of himself in spite of the hand he is dealt.

The story begins in 1980s India, and Madan grows and changes as India grows and changes. This is a reflection of my own life. I grew up in the ‘80s, in socialist India. As an adult I lived in modern India. It was unsettling and wonderful at the same time to watch how things have changed yet remained the same in many ways.

Q: Can you say more about the father-son theme that plays such a big role in the novel?

A: There are a number of father-figures in the novel, from Avtaar Singh to Madan himself. The father-child relationship can be just as complex as those with our mothers.

I was thinking of my father when I came up with the idea of the novel. My father was a man who would go to any lengths for his children – and I did want to bring that into Madan’s quest when he realizes what holds true value to him.

I also thought a lot about what it would mean not to have a father like the one I have. How different my life would be. A father’s relationship to the family unit always seems more tenuous than a mother’s, and I wanted to explore the many ways this could play out.

Q: Did you know how the story would end before you began writing, or did you make many changes along the way?

A: There were only a few things I knew before I began: the way Madan would have his illegitimate child, and the clash of class and culture that would eventually tear him away from the people he loves most. I also had an idea of why he would feel the need to return to look for his lost child. The rest came about organically as I worked on the novel.

A: A couple of ideas are taking shape in my mind and I hope to be working on something new soon.

A: Check out www.taniamalik.com for a short video on Three Bargains. Many pictures in the video are from the places that inspired the town of Gorapur. Also you can follow me on Facebook and Instagram as well as on Pinterest where I pin pictures and information on India.