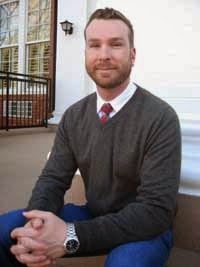 Eric Allen Hall is the author of the new book Arthur Ashe: Tennis and Justice in the Civil Rights Era. He is an assistant professor in the history department at Georgia Southern University, Statesboro.

Q: Why did you decide to write about Arthur Ashe?

A: I’ve always been interested in sports. I grew up in a suburb bordering the South Side of Chicago; it was racially diverse. I knew I always wanted to do something about sports….At Purdue, I was working under Randy Roberts, who’s written on the boxer Jack Johnson and Joe Louis, and I figured I’d do a topic involving sports.

My wife is a professor in the department as well; she was in graduate school at the University of Michigan, and we were walking the streets, thinking of a topic [for my graduate seminar paper] on African Americans in popular culture, and she suggested, What about Arthur Ashe? Has anybody written on him?

At the time, my reaction was, of course--but in the academic sense, nobody really had. The more work I did on him, I realized what a multi-layered, nuanced character he was. He didn’t fit the traditional mold of an African-American athlete. It went from a seminar paper to a dissertation to the book. It grew out of my love of sports, and I grew up around issues of race, around people who weren’t like me.

A: I was really surprised at how much of an intellectual he was. You get athletes, entertainers, celebrities who have a machine behind them [producing an image]. With Ashe, this was someone who really thought and felt deeply about the issues of the day. He was reading government reports, scholarly monographs. When he did finally speak out on these issues, he brought a tool kit from all his reading. He was able to go toe-to-toe with academics. 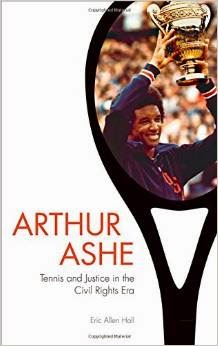 Q: As you describe in the book, Ashe was criticized for his civil rights activism by opponents of the civil rights movement, as well as on the other side, by those who thought he wasn’t doing enough for the movement. Why did he choose the middle course he did?

A: It was kind of a long journey for him. Ashe shows that people aren’t static. You need to locate them at different points in their growth. He grew up in a segregated city, Richmond, and was told, Don’t challenge the status quo; it’s the best way to survive.

Then he went off to Los Angeles, and it was different. He started to talk to people in the movement—the civil rights movement, the Free Speech movement. He became a bit more radicalized by being at UCLA. He also spent some time in the Army, which had a strict code prohibiting him from speaking out. He came to the position he did—he believed you should always talk to people even if they are saying things you disagree with.

People ask me a lot recently, with LeBron James and Derrick Rose and other athletes making political statements now—he wasn’t one to make political statements on the court. On the court, he just played tennis. It’s a conflation of all these different forces. He took a path that was a little more conservative than Martin Luther King’s, more gradual.

Q: Why did Ashe settle on South African apartheid as a place to take a strong stand, and what was his impact?

A: He settled on it for a couple of reasons. There was the decision made by the South African government to deny him a visa, that directly affected him….in this case, he was one of the top players in the world, and he was denied entry to play in the South African Open, a very lucrative [event]—it wasn’t a rinky-dink tournament. It drew him in, because it directly affected him.

Secondly, he saw the plight of South Africans as being worse than any conditions African Americans were suffering from in the U.S. In the townships, he saw utter poverty and hopelessness that he saw in the U.S., but so much worse. He wore a T-shirt from time to time that said Citizen of the World. He thought of people of color in an international sense.

His impact was fairly significant in South Africa, a sports-crazed society….He didn’t just go play there, he toured Soweto, he met with black journalists. Mark Mathabane, who wrote Kaffir Boy, remembers going to see Ashe play in Ellis Park. To him, it made a big difference that an African-American man was not only in South Africa, but was paying attention to the local population.

Q: I wanted to ask you about Ashe’s feelings about women tennis players—it seems from the book that he didn’t have positive feelings about their equal rights.

A: That’s the one blot on his record. It’s tough to understand why, but tennis was a very sexist sport at the time, and it was compounded by the fact that the men and women [players] were around each other a lot more than many other sports. At the time, the idea was that the men tennis players were out there supporting families, and the women were already supported, and were taking money away from the men …

The figures surrounding him when he was young were all men; his mother died when he was very young. His mentors were all men…. Ella Baker, a major leader in the civil rights movement, accused Martin Luther King of being a sexist. There was a level of sexism in the culture as a whole. It doesn’t excuse him—if you’re advocating for human rights, why doesn’t it apply to gender? Before he died, he realized that was an inappropriate position to take.

Q: How did his early death from AIDS affect his legacy and how people think of his life?

A: There’s the one year after he announced he had AIDS [until his death], and then from 1993 to the present. Sadly, his AIDS diagnosis and death from AIDS has overshadowed a lot of his civil rights activism. If you ask people on the street, they’ll say he was a good tennis player and he died of AIDS. When certain anniversaries come up, they highlight AIDS and tennis, but don’t look so much at civil rights.

He knew in 1988 that he had AIDS, but he waited [to reveal it]; he said he wanted to protect his daughter. It was in part to protect his family, [but also] he was so involved in giving speeches and traveling to South Africa. He would not have been able to enter the country if it had been disclosed. To a large extent, AIDS has overshadowed [other issues]. He said his biggest burden was race, not AIDS.

Especially with the demonstrations by athletes about Ferguson and Eric Garner, people are looking at him as an athlete who stood up to injustice way back when. It’s unfair that AIDS came to define him.

A: I’m going to write a shorter book, half as long, on the history of the Black Sox scandal, the Chicago White Sox in 1919, and use the Black Sox as a window into America in 1919 to talk about strikes, race riots, the rise of tabloid journalism, and postwar disillusionment: If baseball can be corrupted, what can’t?

Q: Anything else we should know about the Arthur Ashe book?

A: Relating it to the activism we’ve seen in the past month or so, [some of the coverage] drives me nuts because all these athletes-- the six St. Louis Rams’ raised hands--somehow this is new and sports and politics haven’t been intertwined, when there’s the history of sports and politics together through the 20th century—the 1936 Olympics in Berlin, Muhammad Ali and Bill Russell. This isn’t anything new, and we shouldn’t be surprised that athletes [use their] platform to talk about something more than their performance on the court and the field….

Had Ashe been around today, he would be talking about poverty, inadequate housing, the lack of communications between the police and communities of color. People are focusing on the minutiae and not on the bigger context. He would have added to the conversation. But I’m not sure he would have been on Twitter.