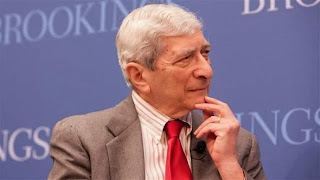 Marvin Kalb is the author of the new book The Road to War: Presidential Commitments Honored and Betrayed. He spent many years as a correspondent for CBS News and NBC News, and is the Edward R. Murrow Professor Emeritus at Harvard's Kennedy School. He currently is a senior adviser at the Pulitzer Center on Crisis Reporting, and a nonresident senior fellow at the Brookings Institution. His 12 books include One Scandalous Story and The Nixon Memo. Last but not least, I'm very proud to say that he is my father and my Haunting Legacy co-author!

Q: Why did you choose to focus in The Road to War on U.S. involvement in Vietnam, Korea, and Israel?
A: Each has something important to say about the rising power of the president to decide when and how the United States goes to war.  This is a subject that has long fascinated me.

The book's subtitle is "Presidential Commitments Honored and Betrayed."  In Korea, the U.S. has honored its commitments to defend South Korea with a treaty, ratified by Congress. 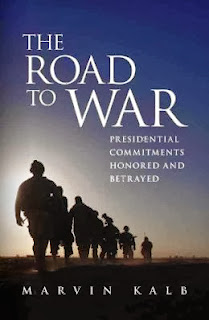 With Israel, the extraordinary relationship with the U.S. is based on private presidential letters. Each letter is seen by the Israelis as a national commitment. The Israelis assume if a president makes a commitment, that applies to the nation; but this is not always so, planting the seeds of a possible betrayal.

The White House says he still has such power, and technically he does, but his political ability to use that power has been sharply cut back. If he feels he must use American might to stop Iran from developing a nuclear bomb, which is his stated policy, will he have to go to Congress for permission? What remains of his role and power as commander-in-chief?

Q: What has the reaction been to The Road to War?
A: The reaction has been fascinating, in part because the book was published just before the Syrian crisis. I'm told the White House has considered the book's theme and that that might have had something to do with Obama's decision to go to Congress for authority to attack Syria.

Informed people now want to know more about the president's powers to take the country from once war to another. What are his powers? Does he need Congress? Are there no written constraints? The U.S. now has no agreed-upon, broadly accepted guidelines for going to war. Are such guidelines even possible today? 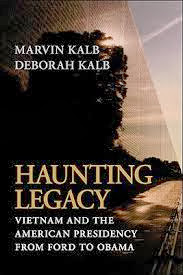 Q: You write, "The time has come to institutionalize the U.S.-Israeli relationship so that everything does not rest any longer on the decisions of one person." Is this change likely to happen?
A: Likely to happen? In the Middle East, everything is possible, and nothing is possible. A relationship so strong and yet so tender and vulnerable needs more than a series of presidential letters. I think it needs a treaty, something clear, firm and not dependent on the belief or whim of one man, even though that man be president.

A: I am fiddling with the idea of writing a book about the major stories I have covered in my life as a reporter and writer. Stories such as City College's unprecedented basketball triumphs in 1950, such as the Cuban missile crisis (I was in Moscow then as CBS News bureau chief), such as the Vietnam War, such as Kissinger's shuttle diplomacy in the Middle East, which I was privileged to cover, such as the almost successful attempt to kill Pope John Paul II, such as the technological revolution that has transformed journalism, the love of my professional life, etc. I am fiddling, and maybe one day soon I'll stop fiddling and begin writing.

--Interview with Deborah Kalb. This interview was conducted in conjunction with The Lessans Family Annual Book Festival at The JCC of Greater Washington. Marvin Kalb will be speaking at the book festival on Sunday, November 17, at 9:30am.