Peter Savodnik is the author of the new book The Interloper: Lee Harvey Oswald Inside the Soviet Union. A former Moscow-based journalist, he has written for publications including Harper's, Time, and The Washington Post. He now lives in Washington, D.C.

A: I spent a few years in the former Soviet Union, and while I was there I spent a lot of time thinking about why Americans would have moved to Russia. I was fascinated by the idea of [someone who becomes] alienated from America and tries to find a purpose far away. Russia has a special allure; Oswald was the most notorious of the Americans who moved to Russia.

What really captivated me was the hopelessness, the despair of an American who, in my view, mystifyingly thinks that in Russia he will find not only solace but meaning.

When you read Oswald’s early diary entries and his letters home right after he arrived in Moscow, and you look at his state of mind before his departure, there’s a real fervor, and a sense that he’s going to join the revolution. This seemed absurd to the Russians. But what comes through is Oswald’s desperation, a deep desire to belong to something all-consuming that will provide him with a direction.

Q: Why the title “The Interloper”?

A: I look at the Soviet chapter not as a discrete chapter in [Oswald’s] life, but as the most important episode in his truncated life. In the sweep of his life, the Soviet period was the penultimate move.

Oswald’s life was defined by a series of moves…constant movement, rootlessness. He attempted in Russia to transcend this. In all instances, the moves were trespasses—he was in the position of trying to break into someplace new. “The Interloper” is getting at that sense of permanent alienation.

Q: How did your sense of Oswald’s time in the Soviet Union change as you worked on the book?

A: I didn’t appreciate before I started…how little Oswald knew of where he was going and what he was getting into, and how closely he was monitored by the KGB…. 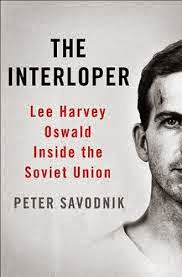 [While in Minsk, where Oswald lived], it became clear to me that everything was very compact; you could see almost everything central to Oswald’s life from his apartment.

Q: How long did you spend in Minsk?

A: Off and on, close to six months. I had made trips there before, but I lived there for the first half of 2010. Then I went back for quick reporting trips.

Q: How difficult was it to find people who had known Oswald, and to get them to talk to you?

A: It was not that hard to find the people; they’re kind of known in Minsk. In Russia, Belarus, Ukraine, there are social media networks, and those are good ways to find people.

The real challenge was not finding the people, it was getting them to move beyond the party line. It’s probably the most heavily covered story ever, and getting people to think about it in a more nuanced way was difficult; it involved coming back to the same questions over and over.

The people in Minsk today who knew Oswald are now in their 70s. When they knew him, it was a convoluted impression—they didn’t know much about his background, and they didn’t know English. When he left, they didn’t know they were going to have to remember. There’s a lot of forgetting.

Then after the assassination, they were told by the KGB not to talk about him. For the next three decades, they were stripped of their mementoes; they moved on with their lives. Then, around 1991-1992, people started asking them about Lee Harvey Oswald. They were thinking back 30 years. Now it’s 20 years from that.

Q: Have the people you interviewed for the book read it?

A: I have not heard from any of them [about it]. I don’t know if it will be available in Russian.

Q: Fifty years since John F. Kennedy’s assassination, do you think most people still believe in a conspiracy theory?

A: Sadly, I think yes—most people think there was some kind of dark clandestine operation, that Oswald was at the most an instrument. In all the conversations about the assassination, one almost never encounters a serious discussion of Oswald’s personality, of his background. That gaping hole made me want to explore further.

With other mysteries, we take into account the motive, the relationship between the suspect and the [victim], the complicated psychological forces. With Oswald, it’s as if we insist on his one-dimensionality, as if he’s somebody we can’t really know. The truth is, we can know more about him. If we take into account his biography, the Soviet period, psychological forces, the mystery is no longer as mysterious.

A: I’m looking at possibilities, but nothing concrete. Right now, my whole life is focused on Oswald.