Jennifer Miller is the author of the novel The Year of the Gadfly, the paperback version of which will be released later this month. She also wrote Inheriting the Holy Land: An American's Search for Hope in the Middle East. She lives in Brooklyn, N.Y.

Q: Why did you decide to write a novel set at a prep school, and do you have any favorite prep-school or high-school novels?

A: I grew up in D.C., and went to GDS [Georgetown Day School], and my brother went to Landon. The book was kind of inspired by a variety of events that happened to both of us. GDS especially is very different from the type of prep school I’ve written about in the novel. Ever since I read Catcher in the Rye when I was 13 or 14, I’ve been fascinated by that culture. There’s something about that rarefied environment, the crucible of…intense emotion; I’ve always found it very compelling.

I have a bookshelf in my apartment that’s dedicated just to prep-school novels. My favorites: Catcher in the Rye; I’m a big fan of the novel Skippy Dies, by Paul Murray; and A Separate Peace had a big impact on me.

Q: How did you choose The Year of the Gadfly for your title?

A: Initially, the title was Extremophile. One of the protagonists is a microbiologist who studies organisms in extreme environments; they’re known as extremophiles. He goes back to his hometown to teach high-school biology, and he can’t help but think of everything he sees around him in the context of extremophiles. Adolescence is the most extreme time of our lives.

The publisher thought it sounded too much like a science-fiction novel, so we went back to the drawing board…and we came up with The Year of the Gadfly. There are many gadflies in the novel. Iris Dupont is an aspiring journalist who takes her moral and ethical direction from the writings of Edward R. Murrow. As a journalist, she is really the primary gadfly of the novel.

Q: Speaking of your character Iris, how did you come up with her, and her fascination with Murrow? 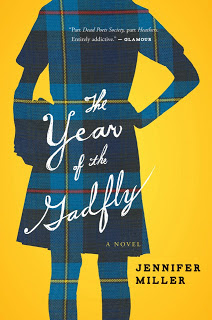 A: I don’t really know where she came from; her voice just came to me and I ran with it. After I started developing her character, I knew she would have a journalist obsession. Murrow seemed like a great choice. First, I needed someone who was no longer living. Iris is the kind of person who would track down her hero, and that would take the book in a different direction. [Also], there’s Murrow’s work in combatting [Sen. Joseph] McCarthy. A teenager has an inflated view of right vs. wrong. When we’re teenagers, we idealize certain figures in our lives.

I also really liked the idea of a 14-year-old girl in conversation with a dapper, brooding, chain-smoking journalist.

Q: You wrote recently in The Washington Post,“I never anticipated that, when I became a professional writer, I’d also become a marketing strategist, publicist and entrepreneur.” You’ve become known for your energetic efforts to publicize your novel. Do you think you’ve done more than most other novelists in this regard?

A: I think a lot of writers are doing it to a certain extent. From what I’ve seen, I’m probably working more energetically at it than a lot of people. I enjoy doing it. A lot of writers just want to write.

I don’t want to say that it’s a shame we have to do this, but if a book doesn’t hit right away, you have to fight for it. I’m an overachiever; I’m kind of neurotic. I like to be out there connecting [with people]. A lot of writers say they didn’t sign up for that, and that’s something I totally respect. It depends on your personalities.

I’m really looking at my career in the long term, and whatever I put in now will have returns down the road, or it will show my publisher that I’m really committed.

Q: You produced a trailer featuring various well-known journalists such as Brian Williams, Dan Rather, and Christiane Amanpour, as well as high-school journalists, reading from your book. How did that effort come about?

A: Initially, it came out of discussions with my husband [Jason Feifer], who’s also a journalist, a magazine editor. I wanted a book trailer that people would feel compelled to forward around. A lot of book trailers don’t make it past the author’s personal network. We wanted to collect a cast of readers who thematically connected to the book. It helps that we have access to journalists, that that’s our profession.

Q: How did the trailer do?

A: It did well; it did not go viral, and that’s the hope of everyone who makes a movie. But it got a lot of press, and it got me into the Washington Post gossip column, and book blogs. [It’s a question of] getting [your] name out there. Journalists are always looking for a hook.

Q: You have launched an effort to set a record by meeting with 100 book clubs in one month. How is that project going, and how did you get the idea for it?

A: It’s going really well. We now have 55 book clubs signed up so far….It’s hard to get publicity for a paperback, because it’s not news. I was trying to figure out a way to create a news hook around the release of the paperback. Book clubs—it amplifies the reach of a book. Also, there’s the ridiculousness of it. During the month of July, I will be on Skype. Even setting up the project has been a full-time job. I felt I needed to do something big.

A: I am working on another book. It’s a novel, based on reporting I did for The New York Times on Rolling Thunder, [the motorcyclists who] come to D.C. for Memorial Day. It’s about a young woman whose father is a Vietnam vet and her fiancé comes back from Iraq with [post-traumatic stress disorder].

A: I definitely am still accepting applications for book clubs! Every group that signs up gets a free book.