Laurie Frankel is the author of two novels, The Atlas of Love and, more recently, Goodbye For Now. She lives in Seattle.

Q: How did you come up with the idea of a character who invents a computer program to communicate with the dead?
A: It came from an idea I had when my grandmother died. She and I emailed each other a lot, and when she died, I had this idea that a good programmer could write software that could fake emails from her. I knew I couldn’t have her back, but I thought her emails in my inbox would comfort me and help me miss her less, and that just seemed so doable to me.

I sat with that idea for years, convinced it was a great idea for a product, before I realized that I’m not a software engineer nor an inventor nor a developer, and plus, the more I thought about it and the deeper I explored, the more I realized what a complicated idea it was and what its enormous downsides and dark sides would be.

Finally -- and it took far longer than it should have -- I realized this was a good idea, not in real life, but for a novel.

The idea also came from my frustration with Facebook and all the time we all spend online these days. I kept having the sense that the time and energy I was spending keeping in virtual touch with old classmates and ex-work-colleagues was time and energy I was taking away from keeping in actual touch with my close friends and family. That’s not what Goodbye For Now is about, but it is one of the questions it asks. 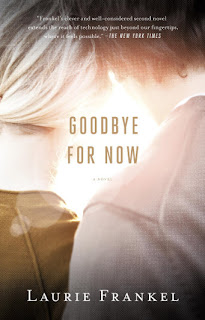 Q: You are able to blend humor into a book that deals with some very sad topics. What do you see as a good balance between the humor and the sadness?

A: Thank you for seeing the funny bits too! The book turned out sadder than I thought it would, and I worry that the funny parts -- my favorites -- get a little lost. I think “balance” is exactly the right word, and it’s what I strive for: a little bit of both.

I try also to intermingle them so that it’s not a book where half is funny and half is sad but rather a book where the funny parts have tinges of sadness and real life and bittersweet and where the sad parts are also lightened and made more real by humor and love.

Q: Your website describes Goodbye For Now as being "in the spirit of One Day," the bestselling novel. How would you compare the two?

A: Publishers and reviewers have loved this comparison though I worry it focuses on only one aspect of Goodbye For Now. I think, and I think they think, that both are, simply, good love stories. In some ways, all stories are love stories, and certainly there’s no shortage of romance and relationships in novels, but what early readers told me over and over is that, like One Day, Goodbye For Now is the kind of deep love story with characters you love too and alongside and whose relationship feels full. And I hope very much that that’s true.

Q: Goodbye For Now has been optioned for film. How involved do you expect to be in the screenplay? 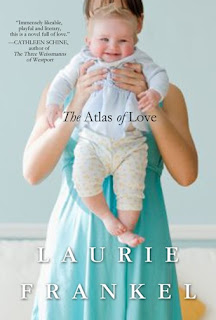 It’s wonderful! It’s wonderful because it’s not my responsibility but also because it’s remarkable to watch other people tackle the same narrative problems that occupied me for so long. It’s exciting to see the story change mediums.

The people working on the film are just great. The first time I spoke to them on the phone, they wondered very tentatively and gently and hesitatingly how I might feel about very minor changes to the text. I think they thought I’d be horrified, but in fact the notion that a story changes as it shifts mediums seems absolutely right to me. The possibilities and challenges of film are entirely different from those of print, so it should be a different story.

When I started writing Goodbye For Now, I began it as a play, and it was very, very different. I think because it made that shift for me -- and I saw what a significant shift it was -- the notion of that transformation is exciting rather than frightening to me.

Novel #3. Very under wraps at the moment I’m afraid. I’d tell you what it’s about, but I’m not entirely certain myself. I keep going back and forth between two completely different book ideas. I imagine that eventually I’ll write them both, but I don’t think I can do them at the same time, so I have to decide which first.