TaraShea Nesbit is the author of the new historical novel Beheld. She also has written The Wives of Los Alamos, and her work has appeared in a variety of publications, including Granta and Salon. She is an assistant professor at Miami University, and she lives in Oxford, Ohio.

Q: You write, "In telling this story, I wanted to add more possibilities to our collective imagination about 'the pilgrims.'" What possibilities did the novel add?

A: First, thanks so much for the interview, Deborah, and for spending time with Beheld and me!

I was taught in K-12 that the Mayflower passengers were a unified group seeking freedom from religious persecution and after five years of research, I came to see that a lot was left out of that version of the story.

For instance, about 20 to 25 percent of the Mayflower passengers were servants to the separatist puritans. One thing I wanted to explore was the class conflict that might have emerged from these inequalities, as well as religious differences between the indentured servants and their masters.

The class and gender differences within the colony were on my mind, as well as the settlers’ culpability in inflicting violence upon the communities of people who had lived in the northeastern woodlands for thousands of years, and are still living here.

In some ways, the most imaginative leap I took was imagining that the settlers, especially the women colonists, existed as humans—with faults, reflections, weaknesses, complicated desires, and love.

Q: How would you describe life for women in Plymouth, and how did you conduct your research for the book? 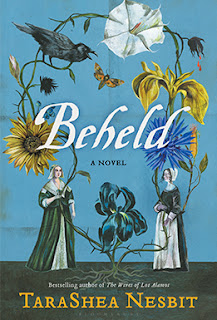 A: I imagine they did many of the same kinds of things many women do now, and particularly familiar to anyone who has tried subsistence living: cared for children, cooked meals, cleaned, gardened, milked cows, supported their husbands, communed with their friends, responded to crises--like infants’ deaths, the mortality rate being what it was, theft and unsavory new arrivals to their community--although with the undertone, always, of reflecting on one’s relationship to God.

As a group, separatist puritans were large journal writers. They were quite reflective and supportive of reading, but no journals of women in Plymouth from 1630 exist that I know of. I imagine them as a mostly physically healthy group—all that fresh air, as opposed to their former city lives in Leiden, Amsterdam, and London.

I imagine they had economic concerns—worrying about how well the trading posts were doing, for instance, and trying to pay off debts to financial backers. Maybe their husbands were the ones doing this worry work, but like many families, the women were taking on the emotional burden of their husbands’ concerns as well as of living a life in a community.

To write the book, I researched for five years. For the women, we basically have nothing. The signature Dorothy Bradford made on her wedding day. The court record written by a man about Eleanor Billington, a former indentured servant. Alice Bradford’s last will and testament. The accounts of the women are penned by men in positions of authority.

When I learned that Plymouth Governor William Bradford didn’t write about how his first wife, Dorothy, perished, though he mentions the cause of death of the many others that passed away that first winter in the northeastern woodlands, I could not stop thinking about her.

I took several trips to Plymouth and Provincetown and visited museums in both places. I walked the lands, took ferries, and sat on beaches. I spent a summer in England. I took my husband, newborn, and 3-year-old with me for a summer in Massachusetts while I was on a fellowship at the American Antiquarian Society.

I studied maps and reviewed court records from Amsterdam and Plymouth. I birthed three children. I had many conversations over five years with historians, scholars, knowledge holders, novelists, friends, and translators. When I began to see conflicting evidence in the research—when two or more narrative accounts of the same events reached vastly different conclusions—I wrote. A: I liked how “beheld” has multiple connotations. I like how it evokes both “seeing” and “holding” as well as the word’s origins, from the Old English bihaldan, bi- “thoroughly” and haldan “to hold”.

I thought of “beheld” as a word that suggests an attempt to thoroughly hold—people, history, truth, belief, another—and how it also suggests a gathering towards knowledge. Plus the frequency of usage in the Bible might evoke the religious aspects of the story.

Q: The book includes a variety of historical figures. What did you see as the right blend between the historical and the fictional versions of these people?

A: Very little is known about most of the women and not much about the interiority of many of the men, either, excepting William Bradford, who wrote a third person plural narrative of the colony and its people.

But anyone who tells stories to their friends and family knows that even a primary document like Bradford’s is a slanted document: what one person would write down “for the historical record” might be quite different than what we might feel in our hearts, late at night, or what we might tell our partner, and all renditions hold something true.

I think different projects require different strategies and balances of the verifiable with the non-verifiable. This in part depends upon what stories emerge in the conversation among the archive, gaps in the archive, historical traces counter to the archive, the muses, and the writer’s imagination, as well as the overall project of the book.

Margaret Atwood aptly said, reflecting on her historical novel, Alias Grace: “A different writer, with access to exactly the same historical records could have—and no doubt would have—written a very different sort of novel.”

If a person has never spoken in the historical record, as Alice Bradford, Eleanor Billington, and Dorothy Bradford have not, it is hard to draw conclusions about the historical version of their interior lives. Fiction was both freeing and terrifying—nothing they ever said or felt is verifiable.

A: A multi-generational family saga of the matrilineal line that explores the lives of working-class and working-poor women and their children, set in the Ohio valley of my youth.

A: On Twitter, I post writing exercises from the creative writing classes I teach and celebrate good news so if either of those things appeal to you, feel free to follow along. I’m at @t_nesbit.