Esther Yin-ling Spodek is the author of the new novel We Have Everything Before Us. She lives in Evanston, Illinois.

Q: How did you come up with the idea for your novel, and for your cast of characters?

A: Like many writers, I am inspired by my life and the people and places around me. I have always written emails about raising my kids to people who thought they were funny.

The lives of the educated mothers of my sons’ schools were also an inspiration, who took time off from their careers to raise their children and turned PTA into something formidable. There was a lot for me to observe.

A: I did not know how it would end when I started to write. I made up the stories and they turned into chapters. I moved chapters around, and cut, cut, cut. 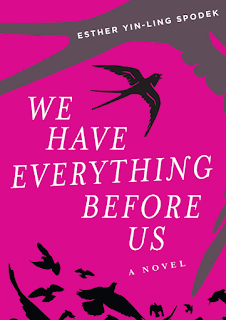 Usually I avoid trying to read subjects close to what I am writing, so I was reading works from the canon, things I studied in college and grad school. I love Shakespeare and I was thinking about King Lear and the storm. That was when the ending came together. But it took a long time to see where these characters were going.

A: I had a working title, “Cocktail Girls,” but that title didn’t apply to all of the characters. I was rereading A Tale of Two Cities, and there it was. On the first page, “we had everything before us, we had nothing before us…”.

In my novel, the characters have so much, and they can lose it all. They have everything…and it can mean nothing if they don’t take care of it.

Q: Can you say more about how you wrote the novel?

A: As I said in answer to the question about the novel’s ending, I wrote vignettes, pieces about the characters.

I am inspired by novels with different points of view, for example, Margaret Drabble does this, and John Lanchester’s Capital, which is about a city block in transition in London. He tells the story from each character’s point of view. I love that approach and it seemed to work for me.

A: I am working on something. But I am very superstitious about talking to anyone about it until I have a draft that makes some sense!

A: I am on my second career, or rather picking up writing again after raising my sons. I was the world’s laziest writer when they were growing up, and never even sent anything out to be published. Wow, things changed!