Natalie Starkey is the author of the new book Catching Stardust: Comets, Asteroids and the Birth of the Solar System. A science writer and teacher, she lives in California.

Q: In your new book, you ask whether comets and asteroids should be feared or revered. How would you answer that, and are there reasons that both might be true?

A: As someone who has studied comets and asteroids for much of my career I truly believe that they should be revered.

While these small space objects have the potential to wreak havoc on Earth if they collide with our precious planet in the future, the more we learn about them now – about what they are made of and how they behave – will better prepare us to deal with one if it’s headed our way.

Comets and asteroids are ancient explorers of the Solar System, born at a time before the planets existed and as such they hold a wealth of information about the early Solar System. If we want to discover how life and water arrived on Earth, then we need to study these small enigmatic cosmic voyagers to see if they’ll reveal their 4.6-billion-year-old secrets.

Q: What first intrigued you about comets and asteroids, and what do you see as some of the most common perceptions and misperceptions about them?

A: For many years I’ve been fascinated by what comets and asteroids can tell us about the formation of our Solar System, and in turn the start of life on Earth. They hold a rich 4.6-billion-year-old history of the Solar System, having formed before the planets even came into existence.

By studying them, we can try to tease out their long-held secrets to find out where we came from and how the planets around us were formed.

The public are often confused about the difference between comets and asteroids and I can let you in on a little secret: the scientific community is also a little confused.

The classic view of these objects tells us that asteroids formed in the relatively hot inner Solar System and that they are essentially the leftover building rubble of the planets. The comet, on the other hand, formed in the cold outer Solar System, collecting together ice, dust and organic material.

However, recent space missions that have visited comets and asteroids up-close have found a different story. Comets seem to contain components that look like materials commonly found in asteroids, and some asteroids have even been found to contain ice, producing a “cometary” tail as they travel through the Solar System.

Such objects have blurred the lines of distinction between comets and asteroids. The general classical view still holds, but the detail about these objects is clearly a bit more complicated.

This may seem confusing, but it’s opened wide the field of research looking at understanding the formation and composition of comets and asteroids. We are still learning so much about our Solar System, how it and all the objects such as the planets and moons within it formed.

It is an exciting time for space science research and we are set to learn a lot more in the coming decades with future missions to visit and sample some of these objects in space. 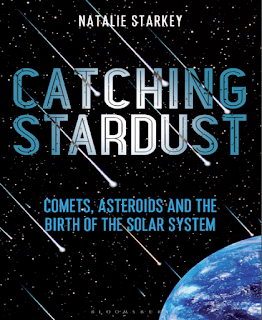 Q: In the book, you discuss what could happen if a large comet hit the earth. What are some of the possible impacts, and what's being done to address them?

A: Fortunately, scientists predict that we are safe for the next 100 years, there are no asteroids and comets with their sights set on Earth during that time. However, after that scientists can’t be sure whether a small space object is choosing to make its way towards Earth.

If scientists can spot it in time, then they have a chance to launch a mission to meet it in space and either divert or destroy it before it hits our planet. However, we would need advance notice of about a decade in order to deal with it effectively.

There is a small chance that a very fast object is headed for us that we won’t spot until it’s too late. If we can’t prevent it colliding with Earth, then it’s really anyone’s guess what the effects will be. The Earth itself has been hit and survived impacts many times in its past. Whatever happens, it’ll continue its journey around the Sun.

But it’s a different story for life on Earth, which could be completely killed off. After all, the extinction of the dinosaurs was almost certainly because of the aftereffects of a large impact from a comet or asteroid.

We shouldn’t be complacent about the risks of an impact on Earth even if it won’t affect anyone currently on the planet. An investment in the research and technology to detect and potentially deflect comets and asteroids will pay off in the future, and possibly save our descendants from extinction.

Q: What do you see looking ahead when it comes to the study of comets and asteroids?

A: There are great leaps forward being made in the space sector at the moment, especially with the competition between private companies to improve the cost and efficiency of multi-use rockets. These developments help pave the way for faster and cheaper space science research alongside the commercial side of space exploration. Researchers get a chance for their scientific instruments to hitch a lift on these launches.

For many, the idea of space mining sounds like science fiction but recent developments mean that it could likely become a reality. Whether it be on comets, asteroids or on the Moon is unknown.

Asteroids, in particular, offer many advantages. They are small and easy to get to, and they have the potential to be worth multi-billions of dollars in precious metals.

If humans want to explore further into deep space, then they are going to have to learn how to utilise the resources that exist out there. Reason being, it is an expensive burden to launch heavy resources from our own planet to take along for the ride.

Comets and asteroids can even contain large amounts of water that could be used as fuel in space. All space mining companies have to do now is learn how to capture one of these objects and start breaking it apart for its precious resources. At the rate things are going, this could possibly happen in the next few decades.

A: I’m currently working on my second book, Fire & Ice, which is about space volcanoes. I’m so excited to share the story of the discovery of extraterrestrial volcanoes and about the many weird and wonderful types that exist out there.

Not all volcanoes look and behave like the ones on Earth. For example, there are volcanoes made of ice out in space! By studying these alien volcanic worlds we can learn about the planets and moons that host them; how they formed and whether they are still active today.

We can also ponder over whether these cosmic volcanoes might have the potential to host the right conditions for life to exist. I’d love for scientists to find life on another planet and know that we aren’t alone in the universe.

A: I also work with Neil deGrasse Tyson’s popular StarTalk Radio as an All-Stars science host, so you can follow my shows with them where I get to indulge my love of talking about space science. Having been based in California for the past three years, I move back to my home country of the UK in the fall of 2018 to continue writing…and talking about space.