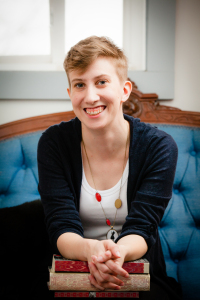 Katherine Locke is the author of the new young adult novel The Girl with the Red Balloon, a winner of the Sydney Taylor Honor Award in the Teen Readers category, presented by the Association of Jewish Libraries. Her other books include the novels Finding Center and Turning Pointe. She lives in a small town near Philadelphia.

Q: How did you come up with the idea for The Girl with the Red Balloon, and why did you decide to set a large part of the book in East Berlin in 1988?

A: I came up with the idea while driving to work one day and "99 Red Balloons" came on the radio. No, I'm not joking! I instantly had this mental image of a girl going over a wall holding onto a red balloon. I thought, Oh, that's interesting and chased my mind down that rabbit hole.

By the time I got to work, I knew that it was the Berlin Wall, and that she hadn't wanted to be there. I wrote a first draft that wasn't very good, but all of the elements were there: her grandfather, time-travel, the questions about whether or not we should or could change history.

And when I rewrote it a year after first having the idea, The Girl with the Red Balloon turned into the book readers now have. It took me that whole year of brainstorming and chatting with writer friends and experimenting to realize I needed to tell it in three timelines--present day, 1988 East Berlin, and 1941-1942 Łódź Ghetto.

I picked 1988 for a few logistical reasons: I wanted it to be before the Wall came down (November 1989) but I also wanted it to be close to the Wall's demise. I wanted East Berlin to feel like it was on the cusp of change. Stories are about change, after all, and I wanted the setting to be acting on the characters as much as the magic and Ellie's accidental time travel did.

The "for fun" reason to set it in 1988 was I really wanted to include Bruce Springsteen's East Berlin concert in July 1988. I kept waiting for someone to tell me to delete that chapter, but no one did! I'm really glad. That concert was a huge deal back then, and I am really glad that I was able to include it. 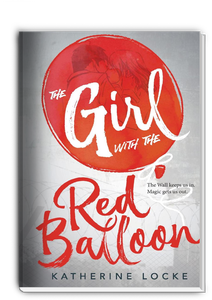 Q: You tell the story from several characters' perspectives. Did you write the novel in the order in which it appears, or did you move things around as you wrote?

A: Such a good question! I wrote the present day and 1988 chapters as they appear, but I wrote all of Benno (Ellie's grandfather)'s chapters separately in another Word document. I copy-pasted them into the novel where I thought they should go, and those moved around a few times with feedback from my agent and editor.

I wrote those separately first because they were emotionally more difficult for me to write and I needed that break and secondly because I knew we'd move them around to create the emotional resonance that we wanted.

A: I did a lot of research for this book. Research has turned into one of my favorite things about writing historical fiction. I read books, listened to interviews, watched news reels from 1988 and the Fall of the Wall, found sites that archived photographs from East Germany, read about Stasi files, watched movies, and used Google Maps to make sure my streets and neighborhoods were accurate.

The most surprising thing I found was pretty early in the process. The ghost stations! I was immediately fascinated by the idea of these empty subway stations beneath the Berlin Wall and the Death Zone (East side of the Wall). I've never added something to a book so quickly.

Q: I see you have another Red Balloon book coming out later this year. Can you say anything about the relationship between the two novels?

A: Yes! The Spy with the Red Balloon comes out on October 2, 2018. It's set in 1943 and it's the story of two Jewish-American siblings, Wolf and Ilse Klein, who are recruited to use magic on the Manhattan Project and thwart Hitler's attempts to build the world's first atom bomb. But when they uncover a spy in their midst, their mission is in jeopardy.

It takes place in the same universe (my friend Paul Krueger, author of Last Call at the Nightshade Lounge, calls it my Ballooniverse) but much earlier with only one minor overlapping character. Otherwise it's new characters and new adventures. They're inventing the magic that you see in The Girl with the Red Balloon!

A: I'm writing a middle grade fantasy book right now that I dearly love, and I'm brainstorming another YA book and a YA non-fic, but everything's under wraps for now!

A: I do free Skype visits for libraries and classrooms! Teachers and librarians can reach out to me through my website.

--Interview with Deborah Kalb. This interview is part of the Sydney Taylor Blog Tour. The full schedule can be found here.
Posted by Deborah Kalb at 7:45 AM