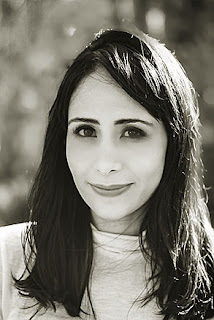 Cate Holahan is the author of the new psychological suspense novel Lies She Told. She also has written The Widower's Wife and Dark Turns. She is a journalist and former television producer, and she lives in New Jersey.

Q: How did you come up with the idea for Lies She Told, and why did you decide to make your main character, Liza, a writer?

A: I had been thinking a lot about the concepts of memesis and anti-memesis. Is art a reflection of the world around us, or does life imitate art? Where are my own ideas coming from? How much am I abstracting from the reality that I see vs. inventing?

I thought these questions could be explored in an interesting psychological thriller. The main character needed to be a writer to properly play with the idea. 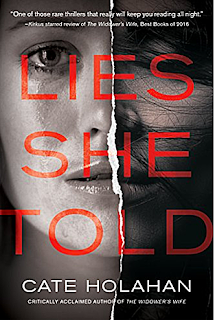 Q: What was it like to write the novel-within-a-novel in the book? Did you try to make the writing different from your own?

A: I had to do a lot of plotting for this novel. The book that Liza is writing has to work as its own story as well as interact with Liza’s “real life,” so there are a lot of moving and interlocking parts.

I did try to vary the writing style. I tried to make Liza’s writing in the novel more showy (lots of metaphors, similes, etc.) The parts about Liza’s life are more journalistic and direct.

Q: The novel switches between the chapters told from Liza's perspectives and the chapters of her novel. Did you write the novel in the order in which it appears? 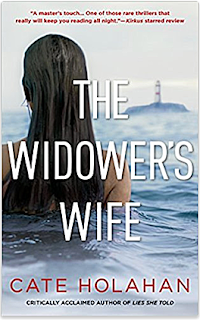 A: I did write it that way. But then, when I edited it, I edited each story separately and then, again, as a whole to make sure that the two tales stood on their own.

Q: What do you think the novel says about the creation of fiction?

A: That writers/ artists are some messed up people. Kidding. I think it says that every story is influenced by the psychological life of the storyteller-- both their conscious life and their unconscious one. 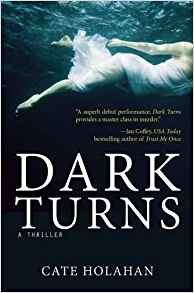 A: I am working on a locked room mystery tentatively titled Shallow Ends. Three couples/neighbors rent a beach house in The Hamptons for a week. One doesn’t make it. One of the others did it. Everyone has a motive. How well do you know those closest to you?

It should be out later this year.

A: Reviews are a writer’s best friend. Thank you to all the bloggers and readers who take the time to review after reading a book that they enjoy. I appreciate it, and I appreciate you taking the time for this interview, Deborah!

--Interview with Deborah Kalb. Here's a previous Q&A with Cate Holahan.
Posted by Deborah Kalb at 7:52 AM