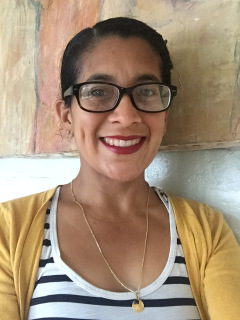 Celia C. Pérez is the author of The First Rule of Punk, a new novel for kids. Her work has appeared in a variety of publications, including The Horn Book Magazine and Latina. A community college librarian, she lives in Chicago.

Q: How did you come up with the idea for The First Rule of Punk, and for your character Malú?

A: The idea and the character came, in part, from my own experiences growing up as a child of immigrants and as a reader. Growing up, I often felt like I didn't quite fit in. My dad is Cuban and my mom is Mexican so there was always a feeling of being in between cultures. Being bicultural in the U.S. added another element of being neither one nor the other.

Growing up as a reader, I didn't see a character or story that closely resembled my own until I was in college. I got into punk and making zines, which are a great way to express yourself and your interests, a long time ago.

So when I started writing this character it just felt natural to make her a little punk who not only didn't fit in with her mom's expectation of what it was like to be a girl and Mexican American, but who also didn't really fit in at her school.

Q: Did you plot out the book before you started writing, or did you make many changes along the way?

A: Unlike in my life where I like to know exactly how things are going to play out and control everything, I did not plot the book. Which seems kind of strange when I think about it because that's a work I can actually control! I just sat down and wrote in a pretty linear fashion. 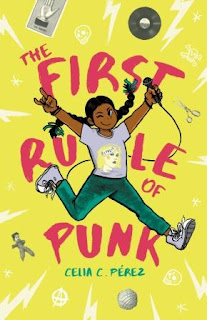 I know some writers will jump around and write the end first or later chapters before earlier chapters. There were certainly changes that happened along the way, and once it got to the later revisions I was working out of order.

I think one of the biggest changes that happened was that the original first chapter was completely cut and rewritten. There were also a few minor characters that weren't serving any purpose who ended up getting the ax.

Q: You also incorporate your own zines into the book. Did you work on those at the same time as the book's text?

A: I did most of the zine work after the book was already far along in the revision process. So I wasn't working on each zine as it came up in the story.

While I was writing I developed, with the help of my editor, a list of the zines I wanted to include and where they would fit in the book. The idea was that the zines would follow their own arc where you see how Malú's feelings about moving and about her mom, her culture, and herself evolve.

The zines also went through an editing process both for text from my editor and for visuals from the art director working on the book.

Q: What do you think the book says about the importance of music (or other creative arts)?

A: I was reading an article recently about the strengths of introverts, something I identify with completely. One of the items listed said introverts are better at expressing themselves through writing than through speaking.

I agree with this, and I think it's one of the reasons why the creative arts are so important. They give individuals who might otherwise fells like they can't easily express themselves for whatever reason, whether it's because they're introverts or because they're isolated in some sense, a way to speak.

I remember being really shy when I was a child and realizing early on how much power writing gave me. I was a brown kid, growing up poor in an urban area, but writing made me feel like I had a voice.

The great thing about the arts, whether it's music or writing or visual arts, is that they give us all access to self-expression that is only limited by our own imaginations.

A: I am working on my second book, another middle grade novel. I'm really excited about it. There's no punk rock music, but I think it contains that same punk philosophy of being yourself, taking control and making things happen in your world.

A: Thank you for the opportunity to answer these questions for your blog! I hope anyone who read The First Rule of Punk gets what they need from it as an individual, whether it's a mirror in which they see themselves or a new way of thinking and expressing themselves. It's been such an honor to see it out in the world and to hear how people connect to Malú's story.