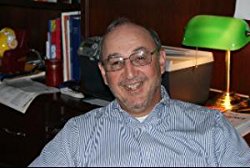 Syl Sobel is the author of How the U.S. Government Works, a book for kids. His other books for younger readers include Presidential Elections and Other Cool Facts, and The U.S. Constitution and You. He is an attorney and also has been a reporter, and he is based in the Washington, D.C., area.

Q: Why did you decide to write How the U.S. Government Works, and what updates do you have planned for the next edition?

A: I loved reading to my daughters when they were little. One night my 7-year-old and I were reading The Kids Page in The Washington Post and the topic was “How the U.S. Government Works.”

I figured I could do that. So I wrote about 12 pages on the three branches of government and what each one does, put it in language I thought a child in elementary school could understand, put a plastic cover on it, and gave it to her. She was delighted.

A few weeks later I told a colleague at work about it, and he suggested I try to get it published. So I wrote query letters to about 50 children’s publishers and finally heard from Barron’s, who said they wanted to publish it. We were all excited, worked on it together as a family, and had a little party when it came out.

Then, of course, my younger daughter asked me the obvious question: “When are you going to write a book for me?” So I asked her what she wanted me to write about, and she said “cool things about presidents.” I thought that was a good idea, so I went to work on it and a few months later had written Presidential Elections and Other Cool Facts.

Well, a few months after that my editor at Barron’s called and asked me if I had any other book ideas. I had to be honest and told her that my first book was my older daughter’s idea and my second book was my younger daughter’s idea. And she said: “That’s your problem, Mr. Sobel. You should have had more kids!”

But she proposed that I write something on the Constitution, which was a great idea and became my third book, and then the Bill of Rights and Declaration of Independence were next. I’ve always loved civics and reading and studying about government, history, law, and politics, and I’ve always wanted to write about them. Thanks to my kids, I did! 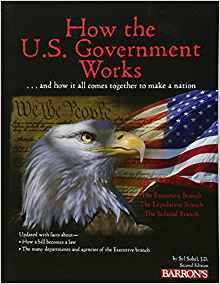 I am a big proponent of the idea that the best writing occurs during rewriting. So this new edition of How the U.S. Government Works gives me an opportunity to tighten text and clarify some of the language that I know I can improve. One topic in particular that I’m clarifying is my discussion of “democracy.”

I said in the earlier edition that the U.S. is a democracy, which is partially true, but really the form of government is a “republic,” and the system we use to elect the leaders is democracy. I am going to flesh that out.

I also want to improve and update some of the illustrations, for example, by making sure there is sufficient diversity in drawings of groups of people and by adding the Native American and African-American museums to the illustration of D.C. that shows where important buildings are located.

Q: What age group has benefited most from the book?

A: It’s marketed for children in grades 3-5 and I think that’s about right. Depending on their reading levels children in slightly younger and slightly older classes could benefit from it. I know it’s become popular also with home schooling parents and has been recommended on several home school websites.

Interestingly, one audience that I had not thought about when I wrote the book is people from other countries who would like to learn about the U.S. government, especially immigrants studying for citizenship exams. I gather that it’s been recommended on several sites that offer resources for immigrants. I am even thinking about volunteering to teach some citizenship classes locally and to use this and my book on the Constitution as textbooks. 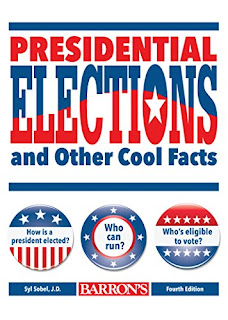 Q: As you mentioned, you've written various other books about the government, including one on presidential elections. What have you focused on in that book, and are you planning a new edition?

A: Presidential Elections and Other Cool Facts is like two books in one. The main text explains the presidential election process, from the primaries and caucuses to the conventions, to the election, and inauguration. Children like to know how things work, or what the rules are. So I like to explain things like how the government works, and how the election process works. It’s a common theme in all of my books.

The second part of the book is the kinds of “cool things about presidents” that my daughter asked for. It has lots of fun facts about different presidents, like who the youngest and oldest presidents were, which states have been the birthplaces of the most presidents, and which sets of presidents are related (hint: there are five of them). I also have a section about several First Ladies, and then there’s a listing at the end of all of the presidents, when they were elected, and which party they belonged to.

The book is in its fourth edition now and I update it in advance of each presidential election, so the fifth edition will come out in early 2020. Should be an interesting one to update. 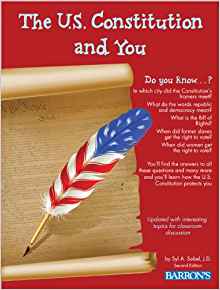 Q: How do you research your books, and what have you learned that especially surprised you?

A: I’m lucky. Most of my research comes directly from the primary sources: The Constitution, the Bill of Rights, and various statutes. I also read reference materials including encyclopedias to come up with the “fun facts” about presidents. I use David Stewart’s book, The Summer of 1787: The Men Who Invented the Constitution, as my go to source about the writing of the Constitution.

The thing that surprised me most was that there are five sets of presidents who were related. Like most people, I can easily name four. But after the first edition of Presidential Elections came out I got an email from a reader who told me about the fifth set of relatives, albeit distant cousins. I did some research and verified it. So I can always learn something, especially from people who read my writing!

A: I still have a couple more children’s books in me. I’m working now on one about how the courts work, then after that I may try to write something on the legislative process (though it’s hard to top the Schoolhouse Rock classic on how a bill becomes a law).

But hey, my kids are grown, they’re 25 and 27 now, so it’s time for me to move on to different audiences, too. I’ve got a few books for general audiences in mind. One has to do with the Founding Generation, about whom I love reading and can’t learn enough. I think they were the most extraordinary collection of great people our country has ever seen at one time, and I love reading stories that tell us more about them as people and about how they got along – or didn’t.

I’ve also started working on a sports-related book. I am a big sports fan. I spend a growing amount of my time covering high school sports for my local community newspaper. I really enjoy it. My kids can’t figure out why I continue to go to high school sports events when they haven’t gone to that school for like 10 years. But I just love telling stories, and writing about kids at that age playing sports provides a never-ending variety of good, meaningful stories to tell.

A: Yes. I spent 30 years of my professional career working for the federal court system. I am an attorney and a firm believer in legal and judicial process and in the rule of law. I am not blind to the political problems that plague our government today. But I think our system of government is the best around and will continue to survive, even though we are testing its limits.

I think it’s important for children to understand how our government operates and why it was designed the way it was. That’s why I am happy that my publisher wants me to update my books, keep them current, and continue to promote them so that teachers and parents will buy them to teach children about civics.

My mom used to tell the story of how when I was little she once asked me what I wanted to be. I told her “a lawyer.” She asked, “Why? Do you want to go into a courtroom and represent other people?” And she said that I thought about her question and said, “No. I want to explain how the law works to other people.”

I guess that’s what I was meant to do all along.