Chris Callaghan is the author of The Chocopocalypse, a new novel for kids. He served in the Royal Air Force and later worked as an environmental scientist. He lives in England.

Q: How did you come up with the idea for The Chocopocalypse, and for your character Jelly?

A: The word “chocopocalypse” first came to me when I was tweeting! My twitter account (@callaghansstuff) was approaching 1,000 followers, so I tweeted something like “if I don’t get 1,000 followers before midnight, there will be no more chocolate in the world! #Chocopocalypse”

I didn’t get any more followers, but the word and the idea stuck in my head!!

Initially, I wrote this story for my daughter, for a Christmas present. I wanted it to be something she could connect with, so I quickly decided to have a young girl as the main character.

I didn’t intend Jelly to be just the same as my daughter, but as I read some of the final edits, I realised how much they were like each other – the same worries, sense of humour and determination. I’m very, VERY fond of Jelly and I hope my readers are too! 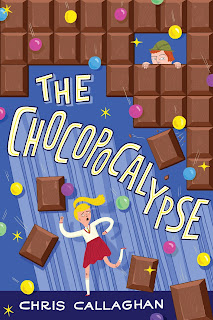 A: Yes. I had the ending in my head very early in the process. I think having the ending made writing the story (and more importantly, finishing the story) more achievable. But there were lots of changes to other parts as the writing and editing progressed, but the basic story always stayed the same.

Q: Some reviews have compared the book to Charlie and the Chocolate Factory. What do you think of that comparison?

A: Scrumptiously crazy! I’m a huge fan of the glorious Mr. Dahl and to be mentioned alongside one of the greatest children’s stories is marvellously flattering. But being realistic, my story is for children and about chocolate, so there is a natural connection, which I’m very happy about.

I do have a slight link with Mr. Dahl, as my boss in the UK is a fine chap called Barry Cunningham, who is not only the publisher who discovered J.K. Rowling, but worked on several stories with Roald Dahl and it was an amazing to get to talk about plot and ideas with a man who had played a part in Charlie and the Chocolate Factory. (I managed to sneak in a little reference to Mr. Wonka in my story too!!)

Also, it was an honour to be invited to the Roald Dahl Museum – which was Roald Dahl’s actual home for many years and where he wrote many of his stories – to talk about my chocolatey book. Definitely one of my highlights of being an author!

Q: What are some of your favorite chocolates?

A: Oh, this is a tricky one! I often ask children this, when I visit schools. Sometimes I get an immediate answer, and sometimes I see the pained expression as they try to choose!

I love the variety in chocolate. One day I might like a bar of chocolate with a soft, gooey centre, other days it might be a solid bar of white chocolate that I crave. Today, I’d pick a silky-smooth milk chocolate bar with crunchy cookie bits in! Tomorrow – who knows!!

A: I have lots of ideas at various stages. That’s sometimes my biggest problem when writing, I try and do too many things. I aim to be more focussed and get one of them finished soon. (One is about chocolate, but it’s not a sequel!)

A: I am from a small shipyard town in the north of England where Sting is from.

I like to sing loudly when I am alone in the car.

I have a stash of chocolate hidden somewhere. But it’s a secret, obviously!