John Scherber is the author of the Murder in Mexico mystery series, which began with Twenty Centavos and The Fifth Codex and now includes 17 additional novels. His other books include the work of nonfiction San Miguel de Allende: A Place in the Heart. Also an artist and a Minnesota native, he lives in San Miguel de Allende, Mexico.

Q: How did you come up with the idea for your mystery series, and for your main character, Paul Zacher?

A: I was on a painting trip to Taos, N.M., in 2005 and I came up with the image of a young woman coming to pose for an artist in his studio. They each have a quite different idea as to what was going to happen.

As I drove, I rehearsed the scene in my mind and nearly memorized it. When I got to the hotel I wrote it down, and that became the beginning of Twenty Centavos. I had begun as a writer right out of college, but I had run off the rails and had writer’s block for 37 years until that day.

The painter, Paul Zacher, is drawn into a murder case because he might see things differently. This perspective gives a different angle to the standard private detective genre.

He is joined by his Mexican girlfriend, Maya Sanchez, who has a master’s degree in history and offers her own cultural slant, and Cody Williams, a retired homicide detective who brings the procedural skills to the team.

As a painter myself, I can bring that experience to the character of painter/detective Zacher. 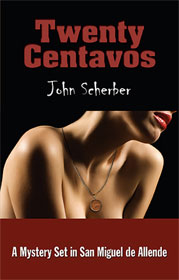 Q: The novels are set in San Miguel de Allende, Mexico. How important is setting to you in your work, and do you think these books could have been set elsewhere.

A: Setting is critical to me. It is always a character in my fiction. San Miguel, with its expat colony of nearly 10,000, provides a closely knit community within the context of an old colonial Mexican city of 75,000.

The possibilities for both cultural connection and misunderstanding are limitless. The expat community is constantly a little bit off balance within its own numbers and with its Mexican neighbors, so the opportunities for conflict and drama are always on offer.

People who live in San Miguel, or visit there, can recognize places where they eat or hang out, so it has a personal connection. For others it can be an interesting semi-exotic setting for a mystery series. Readers of mysteries also like to follow the same group of core characters that they can get to know. 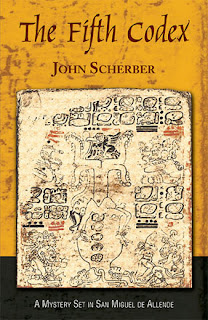 It’s possible that these books might’ve been set elsewhere, but I knew San Miguel from many visits before I started writing it, and having lived here now for 10 years it seems like the perfect spot.

Q: Did you know when you wrote the first book in the series, Twenty Centavos, that you'd end up writing so many more?

A: I was about halfway through the first one when the plot and concept of the second one, The Fifth Codex, came into my head. By the time I started writing it, I had the idea for the third one in place, titled Brushwork. They just seemed to flow like that. Now I have 19 of them in print and two more moving toward publication.

A: I was influenced by Michael Connelly, Robert Crais, Patricia Highsmith, and Tony Hillerman. My characters are almost never black and white, simply good or evil. I’m interested in the way people can rationalize what they do. 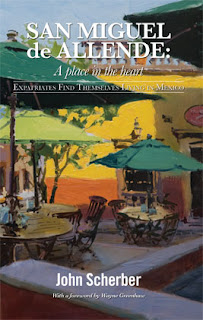 I don’t write about the drug trade in Mexico because those are mostly business crimes and they tend to lack the kind of complexity that drives a good story.

A: As I bring out mysteries #20 and #21, I’ll be doing another nonfiction book on the expat experience in Mexico, and starting mystery #22, titled The Missing Matisse.

A: The Paul Zacher mysteries are in development for a television series by Dorothy Lyman, two-time Emmy Award winner, actor, producer, director, and screenwriter.