Amanda Hosch is the author of Mabel Opal Pear and the Rules for Spying, a new novel for kids. She spent almost ten years teaching English as a Foreign Language, and she lives in Seattle.

Q: How did you come up with the idea for Mabel Opal Pear?

A: I was doing the washing up when this voice popped into my head, saying, “My parents swear they don’t hate me, but all the evidence contradicts their feeble denials.”

The voice was strong, but youngish, and despite her tone, not really bitter. More sort of sad and annoyed. I jotted it down. I was in the midst of querying a contemporary MG [middle grade book] at the time so I think my brain was already spinning up new ideas.

The voice was very chatty and while I didn’t know her name, I did know that her nickname was Moppet (after Beatrix Potter’s Miss Moppet, the kitten), her parents were spies, and she knew their secret.

Moppet’s voice was so strong and fun, it was easy to know how she’d react. I’ve always loved spy, mystery, and detective stories, so that was a natural fit for me. 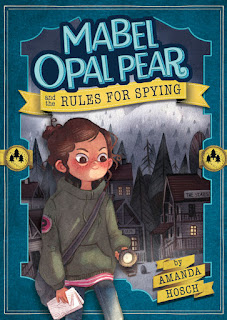 A: Overall yes. To avoid spoilers, I’ll just say I knew which object from the beginning of the book would be important for Mabel to use at the ending and where (physically in Silverton) the climax and the falling action would take place.

Before sending it out on submission, my agent had me revise the ending to give it more emotional weight. Of course, the manuscript was revised many, many times from the first draft to the final.

Q: Who are some of your favorite fictional spies (besides Mabel, of course)?

A: My next door neighbor gave me a set of Nancy Drew for my tenth birthday, and I was hooked. I was a voracious reader so I’d read whatever I could get my hands on, like Ian Fleming’s James Bond novels or Graham Greene’s books even if some of the content went over my head.

In high school, I read most (if not all) of The Saint series by Leslie Charteris. Simon Templar was the first true anti-hero I came across and was very intrigue by the way Charteris developed him. I adored the Roger Moore The Saint series and used to watch it on PBS, along with The Avengers. I always wanted to be Mrs. Peel when I grew up.

The reason I wanted to write a competent girl spy was that I would have loved to read that book when I was a kid.

A: A historical YA mystery set in New Orleans in the 1880s. Doing research has been both thrilling and heartbreaking. My family has lived there for many generations so there’s lots of good family lore for guidance.

A: Read for pleasure across genres. One of my pet peeves is when people say something is a guilty pleasure. All reading can be beneficial. Lots of the historical tidbits in MOPRS I picked up during my childhood reading trivia books on long car trips and they stuck with me.