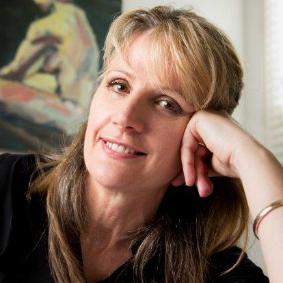 Shirley Barrett is the author of the new novel Rush Oh!, which focuses on a whaling family in Australia in the early 20th century. She is known for her screenwriting and directing work, including the films Love Serenade and South Solitary. She lives in Sydney, Australia.

Q: You write that Rush Oh! was based in part on a historical figure. As you wrote the novel, what did you see as the right blend of the historical and the fictional?

A: Rush Oh! is based on the true story of the killer whales of Eden, and I knew I wanted to write about that.

As I did more research, I found an incredible archive of local Eden newspapers dating back to the late 1800s, in which there would be highly detailed accounts of whale chases, often citing particular the particular killer whales involved by name.

Realising that in this blend of history and fiction that I was intending, readers might think I made up all the stuff about killer whales too, I decided it would be great to include some actual newspaper accounts of the time, for veracity.

The newspaper accounts often mentioned George "Fearless" Davidson, Master Whaler, so I decided ultimately that Mary, my narrator, would be George's fictional daughter, and in fact I created an entire new fictional family for him.

I figured that as long as I was open about what was real and what wasn't (I make it clear in the Author's Note), taking that kind of liberty was permissible.

I remember trying to find out about what legalities might stand in my way when it comes to fictionalizing real people's lives, and I read somewhere that there was nothing to stop you doing it - just don't expect those real people to like it.

George of course is long dead, but he has many proud descendants. I am not too sure what they think about the book - I guess they're probably a bit annoyed, and who can blame them! 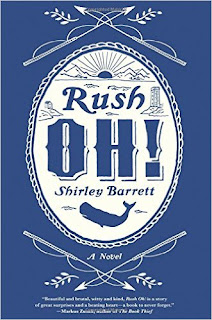 But I hope that Rush Oh! at least might bring more attention to the true story of the killer whales and the Davidsons, and that in turn bring more visitors to Eden.

Q: Why did you decide to tell the story from Mary's point of view, and why from the perspective of 30 years later?

A: Rush Oh! originally started out as a feature film script, and it was set purely in the whaling season of 1908 - there was no future perspective. But when I adapted it to a novel, I realised I had the opportunity to include a lot more detail.

There was a great true story about the real George Davidson, as an old man, retired from whaling, rowing out in a dinghy one day and lancing a passing whale, seemingly just for the hell of it.  I wanted to include that story, and I realised that in order to do so, Mary would have to be telling the story from some point in the future.

Once I'd decided on that, I really enjoyed the vantage point that this allowed me - a lot can happen to a family in 30 years, and Mary is frequently side-tracked in the telling of the story by various fates that have befallen the people she's writing about.

Q: Can you say more about your research into the whaling history that you depict in the book, and what particularly surprised you in the course of your research?

A: There were endless joyful surprises in doing the research, and the biggest source of these surprises was these wonderful local newspapers of the time.

The print is tiny, the pages dense, but I found if I pored over them with a magnifier I would often stumble across some wonderful small gem.

For example, the story of the killer whale Tom crunching George's hand "and receiving sufficient anathemas to last him till the hereafter" was a tiny paragraph, a kind of filler amongst all sorts of other stuff.

I remember similarly discovering that the whaling station had its own gum leaf band (Aboriginal whalers playing tunes by blowing on gum leaves) -a beautiful little detail that might so easily have been missed.

The Eden Observer had a regular column entitled Voices Whisper, where they would mention casually how many fishing nets and boots some horse in Eden had eaten, or that the "whalers were wailing on account of no whales", or that there was a stranger noticed in town wearing snakeskin boots.

All of this, as well as the highly detailed accounts of the whale chases, created for me a wonderfully rich world.

Eden itself has preserved its history well. There's a wonderful museum in town, where Tom's skeleton, loving preserved, is on display and they have much of the original whaling paraphernalia - long boats, harpoons, try-pots. Boyd Tower, the whaler's look-out, still stands.

Most gloriously for me, the Davidsons’ cottage is preserved, and it's a beautiful place to wander about. You might stumble across a whale vertebrae sitting in a shed, for example. Or, as I did one day, the remains of an old mangle sitting in the garden, which immediately brought to mind the struggles of wash day...

Q: You also are a screenwriter and director. How would you compare your writing process when you're writing a screenplay versus a novel?

A: Coming from a screen-writing background, I just thought novel writing was too hard! It took me a long while get the hang of it, but once it clicked for me, I loved it and in fact I now have very little interest in screen-writing any more.

I love the detail and the freedom that writing a novel allows you. To jump about in time, to truly get into your character's mind, to create a voice. I especially love the fact that once a novel is written, that's it - no having to raise millions of dollars getting the bloody thing made!

A screen-play only amounts to anything if it can be made into a film, sadly, and although I've been fortunate enough to make three feature films, I'm kind of happy to just sit about writing novels now.

A: I've been writing a little horror novella which has been a lot of fun. Not that I'm sure there's any actual market for horror novellas...

A: If any of your readers are coming to Australia and have an interest in that sort of thing, get on down to Eden, especially during whale season (July to November).

If you're not inclined to seasickness, try to go out whale-watching on a choppy day – if the water's bumpy, the whales are jumpy!  You'll see a lot of breaching.