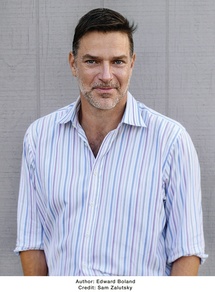 Ed Boland is the author of the new memoir The Battle for Room 314: My Year of Hope and Despair in a New York City High School. He has worked as a fundraiser and communications expert for nonprofits, mostly in the field of education. He lives in New York.

Q: Why did you decide to write this memoir about your year as a teacher?

A: What’s interesting about this book is that until I wrote the book, I had never written anything in my life. It tells you how urgently I needed to process this.

I had my very powerful experience of failure. So many people were cheering me on from the sidelines—You’re going to be a great teacher, you’re a natural—it made it all the more shameful when it didn’t work out.

For the first year I didn’t talk about it at all, except with my husband. He’s a filmmaker and artist, and said, You need to process this. You should go to a memoir group.

I did. There were all these New Yorkers, and they were as genuinely shocked as I was about what was going on. I thought I was a good liberal New Yorker, I thought I had a sense of what life was like for kids in a struggling school, but I didn’t have a clue.

A: Frankly, it was more chronological. I went in with a great deal of hope, fueled by the myth of the hero teacher. It was hope based on my aspirations and I drank some of the Hollywood Kool Aid—all kids need is a good teacher. It’s not just Hollywood, it’s many people in education reform.

I started with hope, and quickly fell into despair. There were so many false victories along the way. They would give me hope, and then blow up in my face—a kid running a drug ring for his brother—you think you’ve made a connection, but it’s fleeting and elusive. 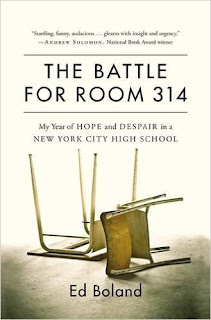 Q: Were you keeping a journal during this time?

A: No. People ask, Did you embed yourself in the classroom in hopes of writing a teacher memoir? No. Is this a money grab? People don’t go to graduate school, teach, and write a memoir to make money!

It was all from memory. I kept a lot of student work, and I had a folder of apology notes and incident reports.

Q: How have the students and teachers you write about reacted to the book?

A: First, the students. I’ve been overwhelmed and in many cases brought to the point of tears by how mature, thoughtful, and positive the response of the students has been. I don’t think I would have been as gracious as they [have been].

I’ve been working on the book for eight or nine years. It’s a big part of my reality. To find out your life is on display—I thought it would engender [negative reactions]…

A lot of kids wrote and apologized to me…it’s ludicrous. They were 14 years old. My job was to keep classroom discipline, not theirs. I refused to accept apologies. I apologized to them for being clueless.

Q: And the teachers’ reactions?

A: The English teacher wrote to me [and said] it was the hardest year of his life, and I was being honest to the experience. That was incredibly validating.

A: I want people to understand that poverty and its attendant problems are the root of educational failure. There are millions of reports, and research—it’s common sense, but it’s not part of the debate now.

I want to tell the story in a way that people [see it] in human terms. I try to tell stories with raw honesty so people see the link between educational failure and poverty. I think I’ve done that.

People say poverty is unsolvable, but that doesn’t make it any less true. And we’re not even trying. There are small things we can do that are getting traction on the left and the right [such as] the living wage issue. I’m more hopeful about that. Maybe it’s too big-picture to be talking about poverty, but that’s what I saw.

That’s not to diminish what’s going on in the education reform movement. [But you] can have the most dedicated teacher, the shiniest laptop, and if you’re Freddy, with a mentally ill mother, no dad, a brother in Rikers, my worksheet on hieroglyphics is not going to do it for you. I did a good job with the worksheet, but Freddy’s mind was elsewhere. So would your mind be.

I want to process the reaction. It tells a lot about American society, education, and the journey of a writer.

I’m starting on a coming-of-age memoir, about my life in Upstate New York—Tales from Smugtown, [which is a name for] Rochester, New York.

A: I do go back to my respect for the kids I taught. They shared their lives—I hope readers understand that I tried to be brutally honest.

People say, is this guy reinforcing stereotypes about poor kids? I didn’t know how to be...honest without enforcing stereotypes. I wasn’t going to write a better version of myself or of the kids. I got criticism, but it was worth it. It’s a less-heard voice when it comes to education.