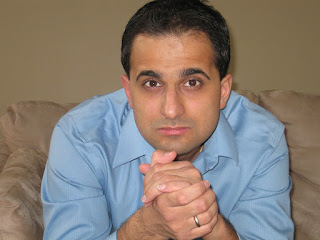 Amit Majmudar is the author of the new poetry collection Dothead. He also has written the poetry collections 0° , 0° and Heaven and Earth, and the novels The Abundance and Partitions. He is the Ohio Poet Laureate, and his work has appeared in a variety of publications, including The Kenyon Review and The New York Times. In addition, he is a diagnostic nuclear radiologist. He lives in Dublin, Ohio.

Q: How did you choose the title of your new collection--which is also the title of the first poem in the book--and what does it signify for you?

A: The title of the book relates to the title poem, in which I refer to the dot worn on the forehead by a Hindu woman. Its significance is that of a poignant personal symbol (related to my mom) and a powerful mythological symbol (related to Shiva's third eye) that was commandeered by hatred and turned into an ethnic slur; and which I, by writing the poem, and the book itself, have "taken back."

Q: Your poems touch on a variety of issues, and you write in a variety of forms. How do you decide on the form to use for a particular poem, and is there one that you prefer?

A: I don't decide the form. The poem decides the form, and I find out the poem's decision as I write the poem. 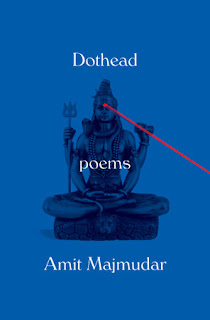 A: I put "ethnic" and "political" content first, to attract the attention to book review editors, who would conclude that the book as a whole was "relevant" to a larger social conversation--and hopefully earmark it for review.

In the middle I put some historically based poetry because non-American history is not a typical theme in poetry. If American poets write about history, they're usually writing about racism and slavery. I was writing about World War I and Rimbaud running guns in Africa; one must bury such things in the middle or end.

At the end I closed out with a poem called "Invocation," which was just to be contrary--an invocation is supposed to go at the beginning of a book, not at the end.

Q: You're also a radiologist, and in a recent NPR interview you described the similarities between seeking patterns in medicine and language. Can you describe how the two fields coexist for you?

A: Independently, in practice. But I would point out that a good radiology report, like a good poem, knows when to be precise, and when to stay ambiguous.

Q: In addition, you're the poet laureate of Ohio. What does that responsibility involve?

A: Whatever I wish it to! That's the up side to being the first one. I get to make this up as I go along.

A: As always, more. More poetry and more fiction; and, hopefully, more truth and more beauty.