Eve Chase is the author of the new novel Black Rabbit Hall. She lives in Oxford, England.

Q: How did you come up with the idea for Black Rabbit Hall, and for the Alton family?

A: I’d been dreaming about four children in a big house in Cornwall for a long time, mulling it over, visualising it, so by the time I actually wrote Black Rabbit Hall, it felt like I had a 360 degree stage set in my head: I knew my way around the house itself, and the basic backbone of the story.

Q: You switch back and forth between one character, Amber, in the late 1960s, and another character, Lorna, in the early 21st century. Did you plan the structure of the book and the ending before you started writing it, or did you make many changes as you went along?

A: The structure was set from the start but not each chapter, which were written in a linear way but freely, not planned in any detail. I wish I could plan more – I suspect it would make the writing process less stressful! – but it doesn’t work for me.

The characters were led by Amber – she was always going to be this sincere, bookish young girl, poised on the verge of womanhood, torn between her loyalty to her wild twin brother and the desire to cut free and fall in love. Only once I knew Amber could I realise Lorna because of the way their two stories intertwine. 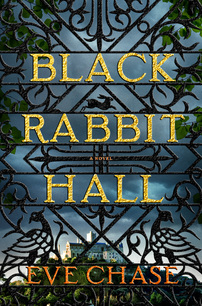 Q: Why did you decide to write Amber's sections in first person and Lorna's in third person?

A: The honest answer is that it just read right, sounded right to my ear – as a writer and reader – so I went with it.

A: A novel called The Wildling Sisters about four teenage sisters from London sent to stay at a house in the English Cotswolds during the heat wave of 1959 - a summer that will change the course of their lives forever, bind them to a terrible secret.

A: I work from a studio at the bottom of my garden – I have to put an internet blocker on my computer to stop myself Googling plants rather than writing. By far my best ideas come to me when I run – I don’t run very fast, I’m a plodder, but it’s the perfect antidote to writing. I drink too much tea. I cried when David Bowie died.