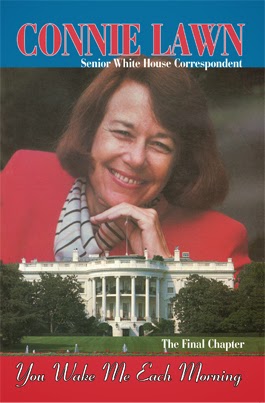 Connie Lawn is the author of the memoir You Wake Me Each Morning: The Final Chapter. She has covered the White House since 1968, and she is based in the Washington, D.C., area.

Q: Your reporting career began in the 1960s. What would you say are the biggest changes for reporters since you first started, and what has remained more or less the same?

A: Everything has changed in the way news is collected and disseminated. I have advocated "citizen journalists" my entire career and now we are here! Anyone with an iPhone can send out stories for TV, radio, and print.

But it is hard to get paid unless you have a sponsor or solid employer. The business is far more insecure and dangerous than ever! Journalism schools have to struggle to stay relevant.

Q: You write about your experiences covering many presidents. Who did you find most compelling to write about, and why?

A: Every president is interesting and so are the First Ladies. Pat Nixon was the loneliest; Betty Ford and Nancy Reagan the bravest. President Ford was most human and he sacrificed his career with the Nixon pardon.

The Nixon and Clinton years had the best stories! Clinton and Reagan were the most charming, but we covered for Reagan's failing memory. Carter and the Bushes were hard to know. LBJ could be vulgar and shocking. Obama is underrated -- I think he will prove to be a great president!

Q: Of all the stories you covered, are there some that particularly stand out in your mind?

A: Major stories were Watergate; the Reagan shooting, and the Israel, Palestine, and general Mideast crises. My biggest stories outside the White House -- Bobby Kennedy final interview, brief kidnap in Lebanon, and my wonderful relationship with New Zealand.

A: Sam Lewis, the one-time U.S. ambassador to Israel, called on me in a press conference. He said, "Connie Lawn -- you wake me each morning!" This is the fourth update of the book. The first one was a best seller in New Zealand. This one is subtitled "The Final Chapter." At the age of 70, I have Parkinson’s. It is a killer and there is no cure. But I look back on a great life!

A: Now I am largely working on promoting the book and covering the White House, the world, and the horrors of terrorism. I can still play a small role in changing policy (see my Cuba and Alan Gross blog in Huffington).

A: My mission is to encourage everyone to write a book! It is easy and inexpensive to self-publish.

My book is on most internet sites (iuniverse.com, Amazon, B&N) but it is far cheaper to buy on Kindle or Nook. I can sell and sign discount copies at the [National] Press Club if you want and may soon do a book party there.