Bartow J. Elmore is the author of the new book Citizen Coke: The Making of Coca-Cola Capitalism. He teaches environmental history at the University of Alabama.

Q: Why did you decide to focus on Coke in your new book?

A: Full disclosure: I’m from Atlanta, Coke country—I grew up surrounded by this icon. Why is it that this thing that started in my home town ended up everywhere?

When I went to graduate school, I was a Southern historian. I only found the field of environmental history in my second year. I was working with a very good Southern historian, Ed Ayers. We said, why don’t we take a Southern product with a global environmental footprint [to write about]. We looked at cotton, tobacco, and then we saw a Coke can, and said, There’s a product that ended up in 200 countries worldwide!

Q: What is Coca-Cola capitalism?

A: The story of tracing ingredients around the world led me to develop the model “Coca-Cola capitalism,” which involves offloading the expenses of producing a product onto others--government or independent businesses.

It’s a model for growth, and most 21st century businesses now follow it. You don’t own your own supplies or distribution; you let others invest in the expensive stuff. Coke makes its money as a middleman, a commodity broker. It transfers sugar in a concentrated syrup to independent bottlers around the world. That’s what’s really interesting about Coca-Cola capitalism--it’s a way of making money off transactions of stuff produced by others.

Q: Has Coke’s way of doing business changed over the years?

A: That’s the thing I’m trying to get people to see—this wasn’t necessarily a conscious decision from the beginning. Putting it in context, it was pragmatic, coming out of the Reconstruction-era South. John Pemberton was a morphine addict, he was cash-strapped. How do you make money without owning stuff? Tap into other people’s infrastructures. He didn’t have the money [otherwise]. John Pemberton was the founder of the brand. Then he died, and Asa Candler took over. He was a cash-strapped guy from Atlanta….

I started seeing it in letters from the ‘40s and ‘50s: We don’t own our stuff, it’s part of our policy. Looking at precedent, it is a smart model. Other companies, from their own experiences, saw that a way to make money was not necessarily making stuff, but being a broker. That’s the reason Wall Street is so successful; it’s Coca-Cola capitalism in the extreme. 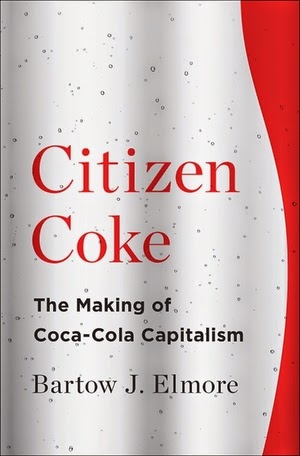 Q: How long did it take for the company to become so influential?

A: Really pretty quickly, that’s what was most startling. By 1910…by that period, it had conquered the U.S. The franchise system for bottlers made it spread so quick. They begin bottling by 1899. By 1900, Asa Candler said we’re in every state in the union. The tremendous expansion of railroads allowed them to shift concentrated syrup; that’s all that Coca-Cola corporate does.

By 1900-1910, they were a nationally recognized brand. They were starting to go overseas in the ‘20s and ‘30s, but that was a fairly soft international expansion.

In World War II, you see the company going global in a rapid fashion. That’s the great thing about Coca-Cola capitalism—they were using government infrastructure to build their empire. Bottling plants [were built] wherever the G.I.s would go. Don’t do it yourself, find partners who are willing, and in this case, it was the U.S. government.

That’s how Coke gets a leg up. They get great government contracts, and Pepsi doesn’t. There are [documents showing] Pepsi saying, Wait a minute, government, you’re really choosing [the] winner!

Q: In the book, you discuss Coke’s impact on public health and on the environment. Could you explain that impact, and do you feel it’s likely to continue?

A: The second half of the book deals with the three biggest issues. Obesity—the human body is part of the environment. Recycling and litter issues, and the third is global water issues.

I went to India on a shoestring budget. There’s an issue in India where bottling plants are extracting too much water from aquifers in arid areas of the country. [A friend and I] tried to sneak into Coke bottling plans to see the realities of what was going on.

There’s a real question of the corporate capture of such an important public resource, as [the company] tries to expand into arid areas of the world.

The obesity issue will be the most damning to [the corporation]. It’s one thing to try to tweak issues here and there, but it’s another to revamp a product they sell at the moment when people are linking sugar with the obesity rate.

I found a way into the basement of the lobby of the American Beverage Association, on K Street in Washington, D.C. I was a young grad student, and I wanted to see if I could sneak in. I said I’m a historian—what possible harm can a historian do? I got to spend several weeks in their basement looking at lobbying materials. You could see they saw the writing on the wall and had to address how to deal with it.

Q: So they’re still trying to figure it out?

A: Yes, [they’re looking at] soft drinks sweetened with a leaf indigenous to Brazil called Stevia. It’s non-caloric. The key for them, in an ecological era, is that it’s natural. It has a little bit of a bitter aftertaste, and they’re trying to solve it.

Q: Is this just Coke that’s working on it, or the industry across the board?

A: Across the board. Coke and Pepsi. I talk about the soft drink industry working together; a lot of them have the same issue. They’re in the forefront because their product is so sugar-rich, and you see it everywhere. There are branded versions called Truvia that you can get.

What does history tell us about whether this will work? Coke needs so much of that stuff. How do you do this sustainably? Have Stevia plants growing everywhere? It’s a tropical plant…

The litter story is interesting. Recycling seems to be the conceit of environmentalists, but I came to see that it’s what the industry wanted, what they were looking for. And why not? It was brilliant, another Coca-Cola capitalism model. The bill [for cleanup] is offloaded once again.

Recycling doesn’t work in the ways we want it to. The bottles we drink out of, we only recycle 21 percent. Most is going to landfills. Part of the reason is that there’s no incentive for corporations to waste less. We reduce the cost for them because we’re building an infrastructure that feeds recycled plastics back. But you still need virgin materials. We’ve actually increased plastic bottle production and waste, even in an era of recycling. It’s because there isn’t a pollution tax and an [incentive] to redesign containers.

A: I am. I decided to take on another big monopoly, so I chose a little company called Monsanto [and] its environmental footprint over the last 100 years…

With Coke, they’re everywhere and we see them. With Monsanto, it’s amazing just how ubiquitous it is—the soles of shoes, polyester linings--[but] you don’t see it. It’s a great foil for the Coke story. It’s hidden in plain sight.

A: The model I call Coca-Cola capitalism is not just about Coke. I think this is a model of late 20th century and early 21st century capitalism that is deeply problematic. A business likes to present itself as a doer, an engineer, a job creator. What we see is that some of the most profitable businesses of our times are actually consumers of [products] built by others. It’s scavenger capitalism.