Peter Finn and Petra Couvee are the authors of The Zhivago Affair: The Kremlin, the CIA, and the Battle Over a Forbidden Book. Finn is national security editor for The Washington Post. Couvee, a writer and translator, teaches at Saint Petersburg State University.

Q: You describe Doctor Zhivago as "a weapon in the ideological battles between East and West." What are some of the key reasons it came to play that role?


A: The actions of the Soviet authorities played the decisive role. The decision to ban the novel, and the demonization of Boris Pasternak, especially in the ugly period after he won the Nobel Prize in October 1958, was a godsend to Western Cold Warriors.


If the Soviet Union had allowed even a small print run of Doctor Zhivago, it is possible that it would not have attracted the attention it did as a “banned” novel and become an international bestseller. In that case, the CIA would have had no reason to organize a secret printing of a Russian language editon.


Q: What accounts for the continuing interest in Doctor Zhivago?


A: Doctor Zhivago is not a classic page-turner; it’s a poet’s novel, a novel of ideas that, probably, would have had a more select readership if it wasn’t for the Cold War controversy surrounding the novel and the 1965 David Lean movie that brought it to the attention of a worldwide audience.


Pasternak and his novel have proved to be an ongoing inspiration for writers, filmmakers and artists. This interest -- and new generations of readers -- keep the novel alive. We are also pleased to note from the responses we get that people picked up the novel again after reading our book. 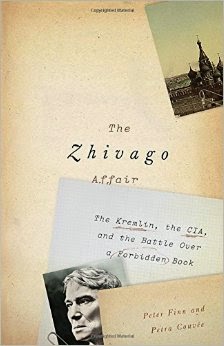 Pasternak’s “single-handed fight,” as he called it, for artistic integrity and freedom of the individual endures. Similar literary controversies occur because of censorship and rigid belief systems. This month, for instance, the Maldivian government announced a new law regulating poetry and literature to protect what it called Islamic codes.


Q: Why did the two of you decide to write this book, and how did you divide up the writing and research?


A: Petra worked on the story in The Netherlands during the late 1990s. Peter published a piece on the Zhivago Affair in The Washington Post in 2007, after which we were introduced to each other. We started to talk, and finally decided to work together in 2010.


We did the research trips together, but mostly communicated by e-mail and Skype, exchanging drafts and ideas, while doing research from our respective locations, Peter in Washington, D.C., and Petra in Saint Petersburg, Russia.


Q: What surprised you most in the course of your work on this book?


A: The role of the CIA had been the subject of speculation and rumor for years. Our research settled what the agency did and did not do, and shed light on its motivation.


The CIA’s principal goal was to get the novel back into the Soviet Union and into the hands of readers there. A limited print-run of the novel was printed in the Netherlands, and distributed from the Vatican pavilion at the 1958 World’s Fair in Brussels. We were surprised to find that the CIA published a second print run in 1959, a miniature edition of 9,000 copies.


But the soul of our book is Pasternak himself – an ever surprising, intriguing character and inexhaustible subject for researchers.


A: We are gathering string on a few ideas, but haven’t settled on anything yet.


A: The Chinese translation of our book is due to appear next month at Peking University Press. And we are very excited about that. A French edition will follow next year. We are still waiting, and hoping, for a Russian edition.
--Interview with Deborah Kalb