Maurice Isserman, the Publius Virgilius Rogers Professor of American History at Hamilton College, is the co-author, with Walter Cronkite IV, of Cronkite's War: His World War II Letters Home. Isserman's other books include America Divided: The Civil War of the 1960s, and The Other American: The Life of Michael Harrington. Cronkite, an associate producer with CBS News, is the grandson of Walter Cronkite, the late CBS anchorman.

Q: How did the two of you decide to collaborate on this book, and how did you divide the work?

A: Walt and I met in the fall of 2007, when he was enrolled as a student in my "Adventure Writing" class at Hamilton College. We stayed in touch over the next four years, and I also met his parents.  When he and his father discovered the collection of his grandfather's World War II letters to his grandmother in the archives at the University of Texas, they asked if I might be interested in collaborating with Walt on an edited collection.

We worked jointly on selecting and editing the letters. Walt contributed opening and closing essays drawing on his personal memories of his grandfather, while I provided a historical narrative that put the letters in the context of the larger history of the Second World War.


Q: Was there anything particular in Walter Cronkite's letters that surprised you, and if so, why?

A: Not knowing Walter Cronkite, Jr., personally, unlike Walt, I think I was most surprised by the humor.  The letters are full of puns, insider jokes, and even a naughty limerick or two. 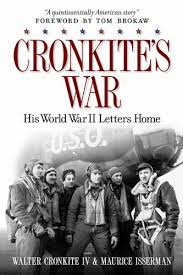 Q: How would you characterize Walter and Betsy Cronkite's marriage, and how is that dynamic reflected in his wartime letters to her?

A: Walter Cronkite clearly adored his wife, and plotted incessantly (and fruitlessly)  to find a way to bring her over to London to join him. This was in marked contrast to many of his journalist colleagues who took advantage of separations from their wives to carry on affairs (Cronkite describes some of those adulterous shenanigans in his letters to Betsy).

Q: What do you see as the most important moment or moments in Walter Cronkite's career?

A: I grew up watching "Uncle Walter" on the CBS Evening News, from the fall of 1963 when he announced President Kennedy's assassination through 1981 when he stepped down as anchorman.  In between, of course, he covered the civil rights movement, the war in Vietnam, the space launches (always a favorite story for him), and much else besides.

In addition, I remember learning a great deal about American history (including the history of World War II) from him in the various documentary series  he narrated, including "Air Power," and  "The Twentieth Century."

And I particularly remember the "Return to Normandy" special report that aired on June 6, 1964, the 20th anniversary of the D-Day invasion, when he and General Eisenhower revisited the invasion beaches, and the American cemetery at Colleville-sur-Mer, above Omaha Beach.