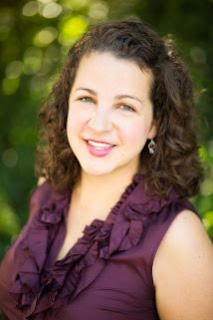 Laura Sook Duncombe is the author of the new young adult book A Pirate's Life for She: Swashbuckling Women Through the Ages. She also has written the book Pirate Women. She lives in Tulsa, Oklahoma.

Q: How did you choose the women you wrote about in A Pirate's Life for She?

A: I love all female pirates, but for PLFS I selected the 16 who we know the most about and are most sure they existed.

I wanted to include a broad range of ages/geographical areas/time period/ethnicities, and I wanted to make sure I chose the ones with the most exciting stories as well. So I carefully evaluated the 35 pirates in my first book and culled that list down to the 16 in PLFS.

It was tough! I was so sad to see some of them go...they've become like my daughters. My very rebellious, very wild daughters! 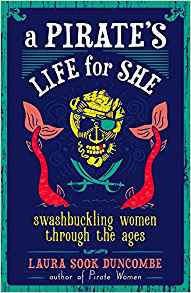 Q: You write, "Readers should understand that it is difficult to separate fact from legend in pirate history." How did you research this book, and did you learn anything that especially surprised you?

A: I researched this book by reading a lot of newspaper accounts and trial documents from these women's lives. I also relied heavily on the amazing research of the pirate scholars who've come before me...Dian Murray, Anne Chambers, Joan Druett, just to name a few. The female pirate researcher field is small but very mighty!

What surprised me was how many female pirates are out there but mislabeled. Some are just called "criminals," some are called "wife of pirate XYZ," and various other names, but when you read the stories it's clear that they are actually pirates! They have just been hidden in the shadows for too long.

Q: Of all the pirates you've written about, are there one or two that you find particularly fascinating?

A: I love them all SO MUCH!

But I do especially love Sayyida al-Hurra because she's a Muslim refugee pirate queen. She doesn't look like how most female pirates are portrayed, but she was such a powerful woman and she was amazing at being a pirate.

I also love Grace O'Malley because she was a working mother pirate--she had her sons on board with her sometime. As a working mom myself, I am so stunned at all she accomplished. 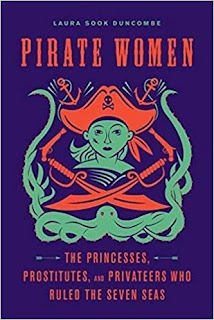 Q: You write, "The pirates in this book have a lot to teach women today about taking thing that other people say they cannot have." What do you hope readers take away from the book?

A: I hope readers can be empowered by these women to seize control of their own destinies. There's so much NO out there in the world, and I hope that readers can take NO and turn it into YES for themselves. Everyone deserves a chance to follow their own dreams, and I think pirates are a great example of people following their own dreams, however unorthodox they might be.

A: Right now I am working on a YA historical romance about two pirates, and a children's book about pirates. I just can't get enough!! Ypu know the crazy cat lady? I'm the crazy pirate lady.

A: I think that there's something for everyone in a pirate story. It's not all "yo ho ho" and peg legs...pirates represent freedom. And who doesn't love that?