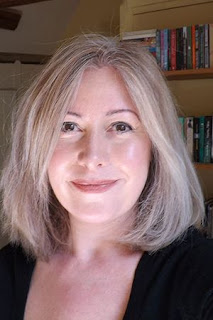 Caroline Scott is the author of the new novel The Poppy Wife. A freelance writer and historian, she was born in the UK and lives in France.

Q: How did you come up with the idea for The Poppy Wife, and for your characters Edie and Harry?

A: Back in 2014, with the centenary of the start of the First World War in my mind, I began to research my family’s own experience of the conflict. I could only get so far, though; the historical record was full of gaps and silences, and I was left with questions.

I’d been writing for a history publisher for a while, but I’d always dabbled in fiction too, and now I found my imagination being drawn into those gaps. Fiction allows you to shine a light into the dark corners that you can’t always get at with historical research, to test possibilities, and that’s interesting.

While I was researching a non-fiction project, I’d come across the story of the grave photographers who were working in France and Belgium after the First World War. Most of them were ex-servicemen, and their employment would have obliged them to keep on returning to areas where they’d fought.

That seemed like such an interesting job to give to a character in a novel – and thus Harry came into being. He wants to help other people cope with their bereavement, but is constantly forced to return to his memories and his own unresolved grief.

As The Poppy Wife opens, Edie is having to confront a lot of difficult questions, but she’s a strong young woman, with spirit and a sense of humour. 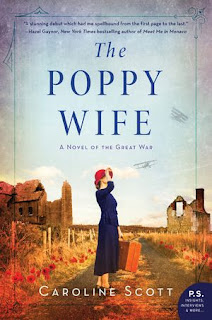 So often in novels set during this period women are wilting flowers, merely decorative and largely passive, but when I researched female experiences of the First World War, I encountered so many determined and courageous women, with ambitions and frustrations and fight. I wanted to salute them, and also to create a character with whom today’s readers could empathise.

A: This book emerged from the process of researching my great-grandfather’s experience of the conflict, so the wartime sections of the story are closely based on the records of his battalion. The chronology, the journey and the military engagements are all real.

I worked with the unit’s war diary (the official daily register of events), but also found journals, letters, and memoirs written by men serving in the same battalion. When you spend a long time untangling the loops of a man’s handwriting, and hear him confessing his fears to his mother, it brings you closer to that particular moment in time.

Although I’ve had an interest in the aftermath of the First World War for many years, some of the photographs from that period surprised me. It’s shocking to see just how completely devastated regions of France and Belgium were, but these places were also so quickly repopulated. Those pictures say much about how resilient people can be.

Q: The events in the novel take place a century ago. Do you see parallels with the aftermaths of today's wars?

A: Although military technology has changed considerably over the past century, the aftermath of war looks strikingly similar then and now; when I see pictures from Aleppo on the news, I’m reminded of photographs of Ypres and Arras in 1919.

That brings home how the experience of war hasn’t changed that much for civilian populations – there’s still the destruction of homes and infrastructure to cope with, displaced persons and divided families.

Moreover, whatever the changes in weapons, politics, medicine, and communications, the emotions that veterans and their families have to process are still much the same as they were one hundred years ago.

A: Interesting question! I’d worked out the trajectory of the three main characters’ stories, but the final dynamics were refined over many drafts.

I was lucky to have the opportunity to work with two editors and the great thing about this process is that they ask you lots of questions. You have to really think all the storylines through (even the parts that will never appear on a page), and tie them up in a way that will be satisfying to readers – hopefully!

Going through that process changes your perspective; I’d known my characters for a long time, but then I had to look at them again as a reader might.

A: I’ve recently finished writing my second novel. It’s the story of a soldier who returns from the First World War with total amnesia – he has no recall of his own name, his family or where he’s come from – and of three women who separately are absolutely convinced that this man is respectively their son, their brother and their husband.

It’s such a fascinating period and it keeps on drawing me back.

A: Readers might be interested in the photographs that I used while writing The Poppy Wife. I’ve gathered some of them together on my Pinterest page  and you might well recognise locations, scenes and objects from the story.

For anyone who wants to learn more, I’d direct your attention to the Imperial War Museum’s online photograph archive. It’s a fascinating collection.

Thanks for your time and your questions!