Ayser Salman is the author of the new book The Wrong End of the Table: A Mostly Comic Memoir of a Muslim Arab American Woman Just Trying To Fit In. She is a writer, producer, and editor, and has worked for Universal Pictures and Disney, among others. She lives in Los Angeles.

Q: At what point did you decide to write this memoir, and how long did it take to write it?

A: I’ve been writing about my life and my background in some form or other - as pilot scripts for TV. As well, I was also writing blog articles, which were little vignettes offering funny glimpses of my life as an immigrant, with my “strong flavor” parents, etc. A trusted mentor encouraged me to pull these stories together into a book of essays.

As I started writing, I discovered my story contained the narrative thread of being an outsider and navigating my world that was specific to me but perhaps could be universal and insightful (or at least entertaining) to others.

I started writing it early 2016 and it took about a year and half. Current events and the evolving socio-political climate informed the writing for sure. 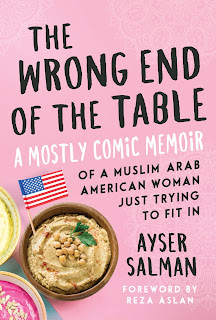 Q: In the book's foreword, Reza Aslan writes, "To put it plainly, our stories should not be of Muslims who happen to live in America: they should be of Americans who happen to come from Muslim backgrounds." What do you think of that assessment?

A: I think it’s accurate. To put it the first way keeps Muslims as outsiders. Unicorns. Someone we let in on a benevolent day. To make it American-focused first is to expand the definition of what it is to be American.

A: How could I not write it? His behavior requires a response, and as a writer I felt it was my duty. It was very cathartic. I recommend everyone write one. Even it just remains unsent in your drawer at home.

A: All my life I’ve felt like I’ve been at the wrong end of the table. Literally. It always seemed like something more interesting was going on the other end.

It signifies how much of my life I spent trying to fit in instead of embracing my differences and quirks and being content to be wherever I am without worrying about what’s on the other end. I share this book with anyone who’s ever felt like they’re at the wrong end of the table.

A: I’m developing a TV show based on the book. And I’ve been threatening to write a Rom-Com script even though my reps keep telling me no one is buying them. I think we need more feel-good movies out there. Would you watch it?

A: My mom is proud of me and the book, though she’s not thrilled with the dating chapters...