Octavio Solis is the author of the new book Retablos: Stories from a Life Lived Along the Border. He has written more than 20 plays, including Alicia's Miracle and Se Llama Cristina, and his work has appeared in a variety of publications, including the Chicago Quarterly Review and Catamaran Literary Reader. He was born in El Paso and spent many years in the Bay Area. He lives in Medford, Oregon.

Q: Why did you choose to write this memoir in the form of stories?

A: I would say I didn’t choose to write in this form, but rather the form chose me. I was just writing. It came out at a time when I was having writer’s block issues on a play. In the absence of anything constructive, I decided to fill a blank page with something else. It took a lot longer than I’d thought.

It was something from my past. I also wanted it to be something from my dreams, and if I didn’t get it down, I would consign it to something I’d dreamed. When Oscar Villalon from ZYZZYVA journal asked if I had anything from the play to submit, I said no, but I have this—and he published them!

Every time I wrote one, another one revealed itself to me, and it was another door that would open.

Q: You write, “One thing I have learned from writing these retablos: the shit on the border never changes.” What do you think of the current situation, and do you have a sense of what will happen looking ahead?

A: The book is meant to be a personal reflection on my experience growing up around the border. It’s not meant to be political. I don’t have any solutions.

I just know that since they established the border in 1848, the Treaty of Guadalupe Hidalgo that made the Rio Grande the border, people have crossed it at will because they separated populations, families, communities that were established.

People, like animals, are migratory creatures. Establishing a border just means establishing another procedure for crossing. Before, it was just wading across a river. 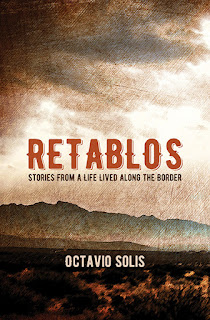 [On the border during my childhood] I saw it in play—people walking past our home, walking north to somewhere where people were waiting for them, or we’d see Border Police vans looking for them.

The situation will never change until there’s economic parity between both nations, and Mexico has long been hindered in trying to reach that parity, by usurpation by a larger power and by corruption of the government there.

I don’t think it’s as dire as has been expressed to be—it’s created a climate of xenophobia, racism, fear, that’s been exacerbated over the last several years.

What I said in the introduction—[now] it’s actually worse. But I’m glad I got it off my chest so I could just tell stories. That’s what I’m about, experiencing it all as personal.

Q: How did you select the particular events you wrote about in the book, and did you write the chapters in the order in which they appear in the book?

A: They all came of their own accord in a non-chronological way. I thought people might read them that way. My editor sought to find an arc in the book so people might find linearity to it. But it shifts—sometimes there’s an adult perspective over an event when I was 5, or sometimes it’s a child’s perspective.

Q: Do you have one story that’s a special favorite?

A: There are some I pick to read aloud because they feel more like a complete story.

“The Want” is one of them. People assume there’s a difference between the Octavio who is reading and the Octavio experiencing the story. It’s a character and I have a responsibility to tell that character’s story. I’m not even that bothered by autobiography. I want to tell a really good story. “The Want” feels complete to me.

I also like ones that feel like character studies, that take me to a different narrative place. “Red,” about my little brother—I wanted to do a character study of him, but it shifted away from him to the red lens in his glasses and how that gives me an inkling of what the end of the world might be. I was surprised by that. I didn’t intend it to end at that point. That’s the writing I [enjoy most].

It was a commission for the National Steinbeck Center. I went on a trip with two other artists, a film crew, and the Steinbeck Center staff on a road trip. We started in Oklahoma where the Joad family [from The Grapes of Wrath] lived, and took the route they took on Route 66.

We did everything from camping in old WPA cabins to helping hot air balloonists in Albuquerque. We interviewed survivors of the Dust Bowl. Many hadn’t seen each other since they were children.

The whole trip was a remarkable experience, but I couldn’t find a way in…I had no idea what I was doing [as a writing project]. It wasn’t until we arrived at the Arvin Migrant Center outside Bakersfield, which was featured in The Grapes of Wrath, that I knew what I had to do.

We interviewed a young man who was the only one we interviewed who had read The Grapes of Wrath. When he told me he was the new Tom Joad and Mexicans working on the fields were the new Okies, I knew the way in.

So I wrote this play. Since then, I tried to find the right theater company, and luckily it’s a company in my new home.

I gave myself permission to [invent] what I couldn’t remember, and to peel away layers to get to the center of what I remember.

El Paso is a large community, but it’s one of the most isolated cities in the continental U.S. The nearest large city might be Dallas. But across the river is Juarez. If you take the river away, it’s one large metropolitan area.

I hope these stories demonstrate that despite the divide, there is so much we have in common with people from Mexico. I want to complicate our expectation of what people south of the border mean and represent.

I had a community of artists I’ve known and collaborated with for years as a theater artist. Then I started working on the book, and I became part of another community, the literary community, that is as supportive as my theater community. It’s been fantastic getting to know writers I truly respect and admire…it’s opened up a new chapter in my life that I hope can continue.