Henry Allen is the author of the new book Where We Lived: Essays on Places. A Pulitzer Prize-winning writer, he worked for many years at The Washington Post. His other books include Going Too Far Enough and What It Felt Like.

Q: How did you come up with the idea for this book, and how did you choose the places you include in the book?

A: It was all an accident. I’d long wanted to write about my father in the hackneyed hopes of redeeming his failures and celebrating his successes. This is not so much an ambition as it is a condition of manhood as the years wear on. But I couldn’t figure out how to make it work as a piece of writing.

I grew desperate thinking that I was in the last quarter of my life and when I died, so many realities would die with me, unknown to my three children, and their children. Then I saw how to do it -- write about the house he grew up in, the site of a family triumph they thought would never end, a home place, a family seat. 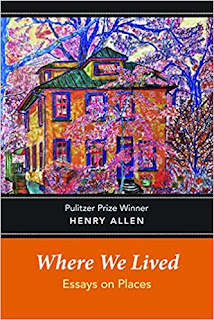 I did not intend to publish it — I began it as a memo for my descendants. But it ended up in the online New Yorker, a story of 407 Highland Avenue, Orange, New Jersey.

What next? Early in the 20th century as the hegemony of the white Anglo-Saxon Protestant began to wither, family members wrote histories of the one thing they could not lose, their lineage.

One of these histories went back to a big stone farmhouse in Wales that a direct ancestor bought in 1557. There was a picture of it, taken in 1930. I wrote about it, speculating on its smells and wear.

That ancestor’s great-grandson emigrated to Boston in 1638 and built a house a block away from Boston Common. I speculated on the harshness of the weather and the staring of the Puritan fathers. Sons left to be part of the founding of Woodstock, Connecticut, with many noble houses that still stand.

Meanwhile, in Bristol, Rhode Island, there were the privateers and slavers with a fleet larger than the U.S. Navy. Their houses stand too, haunted by the lives that were lived in them, the crimes and triumphs, the greed and hardness of sea merchants. In Salt Lake City there was railroad money.

And so on and so forth, an accident of ancient books I’d saved and ancient tales I’d heard. 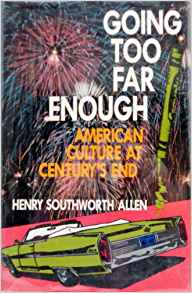 Q: Did you need to do much research to write the book, or did you know most of this from your own memories or family stories?

A: I suppose I did a lot of research but I’ve been doing it for a long time with visits to old towns and houses, and the troves stored in Google. I don’t think of it as work. It was a passion to pass on the spirit of my family, the constraints and opportunities I’ve transmitted with my genes.

I came up with more questions than answers. Why was my mother’s grandfather excommunicated by the Mormons? Why were so many children damaged, somehow?
Q: Of the places you write about, is there one that’s especially important to you?

A: The place that means most is my grandfather’s house in New Jersey. It just does. I spent holidays there and we lived there for a little while after World War II. And I listened to mentions of it as simply “407” until my parents died — it meant a vast amount to my father. It defined life as life should be lived, but then couldn’t be lived as the world changed after the war. 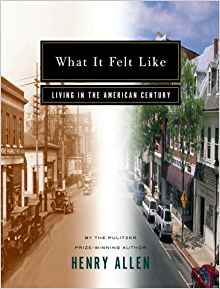 Q: What do you think the book says about your family and its history?

A: The book tells me something about my family that I hadn’t realized until after I wrote it — that class tends to persist, with its sense of station and entitlement in the world, and it can persist for a good while after the money disappears.

Americans cannot and will not talk about class, but it exists, a secret and instant knowledge you deploy on your way through the world. It takes as long to lose it as it did to gain it, I suspect.

A: I’m writing poetry, right now sonnets about the months, rhymed and metered, Shakespearian. I think they’re as good as anything I’ve ever written but I have half a year left to go.

A: Anything else you need to know? I write for readers, not for the record or the critics or even myself. Literature is a collusion between reader and writer. It is never, ever about itself, critical theory notwithstanding. It is a form of music, as in Shakespeare or Dickens or F. Scott Fitzgerald.

It should thrill readers with the recognition of a truth they’ve always known but never expressed. Beauty/truth, truth/beauty. And God bless and keep the English language.