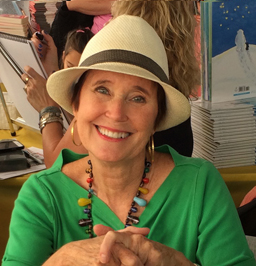 Susan Stockdale is the author and illustrator of the new children's picture book Fantastic Flowers. Her other books for kids include Spectacular Spots and Stripes of All Types. She has been a fantasy landscape painter and a textile designer, and she lives in Chevy Chase, Maryland.

Q: How did you come up with the idea for your new book, Fantastic Flowers?

A: I came up with the idea at our very own U.S. Botanic Garden. My husband and I were there on our 25th anniversary—it was seven years ago. I was working on other books at the time.

We walked in—it’s so beautiful! You can navigate it in a modest amount of time. We went into the orchid room, and saw an orchid that looked like a monkey! The idea came to me at that moment…

I thought I could really have fun with this. The next stop was to look on the computer to see if anyone else had [written this]—and then to dig into the research. 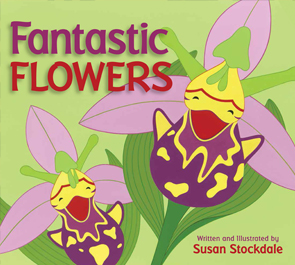 A: Because I was at the U.S. Botanic Garden, and I like to work with scientists, I called Ari Novy, the director. I asked if I could get his input, and he was so eager to meet with me. Scientists like getting information out in the world for young children!

I met with him and we talked for about an hour. He made suggestions of a few flowers. I knew I would write the story in rhyme but have pretty significant back matter.

I was thinking about how to present the information—to have information on each, or to categorize them. [Our conversation] informed the way I treated the back matter. He said you can’t categorize flowers in a neat way…I ended up presenting the name of the flower, the scientific name, where it grows, and its pollinators.

After the meeting, I did traditional research in books, magazines, online…I was looking at photographs of flowers—the ones that would be the most fun for kids and provide the most interesting text…

Q: Did you do the illustrations before the text, or the other way around?

A: Typically I write the words first and then come up with the images. Sometimes I come up with a more interesting flower, so it’s a dance between the words and the pictures. I worked with three botanists…they all brought something different to the table.

[I would ask], Do my illustrations look correct? There was one situation where I thought something was a flower but it wasn’t!...I had to not use that illustration. I have to make sure they’re accurate…I’m constrained by the science. It forces me to make more artistic decisions.

Q: These flowers are really amazing, including the ones on the cover that—as you write—look like bumblebees laughing. How did you find this particular flower?

A: That was just research! I go to books, magazines, online resources. That’s commonly called the Bumblebee Orchid. I like picking out flowers that have a name that’s appropriate. It’s satisfying for kids.

A: I’m thinking about a fiction idea…I’m excited about promoting this book. One thing I really like doing when presenting to kids—Fantastic Flowers is about flowers, but also about object identification. These [flowers] resemble something else. My audience is just learning what these things are anyway, so there’s a dual [objective].

I’m into visual literacy with kids. I like to show them the sketch and the final image, and ask what changed and why I made that change. They’re open-ended questions.

My impetus is to get kids outside, and to pay attention to what they’re seeing. The reviews so far talk about [the idea] that it will make them run outside and start looking at things in a whole new way. I’d be thrilled!

--Interview with Deborah Kalb. For a previous Q&A with Susan Stockdale, please click here.
Posted by Deborah Kalb at 5:49 AM